Brazil is well known for its fast-paced economic growth, but today the country has shown the world that it is quick to take action for animals as well.

Cruelty Free International launched our Brazil office and campaign for a ban on cruel animal tests for cosmetics and toiletries just nine months ago. And after a whirlwind campaign, the Congress last night voted that most cosmetics tests must now be carried out without the use of animals.

The bill -- fast-tracked because of the impending World Cup -- was hammered out in a series of detailed negotiations between its sponsor, Representative Ricardo Izar (PSD-SP), Cruelty Free International Brazil campaign manager Dr Frank Alarcon and government officials including the major testing and validation authorities. Detailed negotiations with the parties were important too, and a key turning point was when we obtained a written commitment signed by all 10 party leaders to give the issue priority.

With the support of politicians, celebrities and over 190,000 compassionate people who signed our petition, our hard work has paid off.

In 90 days' time, when the bill comes into force, the use of animals for cosmetic testing will be prohibited where alternatives have already been established. Alternatives which have been approved internationally will be accepted. Animal testing will still be allowed for the rare case of novel ingredients developed for use in cosmetics, but even this will be prohibited after an alternative method has been established or in five years, whichever happens first.

The significance of our achievement cannot be overstated. It took us 20 years of relentless campaigning, with detailed negotiations, fierce opposition and false starts, until the European Union eventually agreed to consign animal tests to the past where they belong. It took us just 9 months to make this hugely significant breakthrough in Brazil.

When we established Cruelty Free International just over two years ago with the EU ban finally in sight, it was because we knew could -- we must -- take our expertise around the world and turn the European ban into a global ban. Animals in testing laboratories simply couldn't wait another 20 years.

And we were right. Our team of experts has been able to use the EU decision to open new doors around the world, including in Brazil. This strategy has been instrumental in paving the way for bans in Brazil, India and Israel, and positive developments in China, Korea and Vietnam. The global trend is now unmistakable -- not least because cosmetics companies need harmonized regulations across the world rather than a need to use modern non-animal methods in some countries while having to duplicate the work with animal tests elsewhere.

Our task is now to work with industry and regulators to ensure that Brazilian cosmetics become completely cruelty-free at the earliest possible date, and to use the momentum created in Brazil to convince other countries that the continued use of animals to test cosmetics is anachronistic and, frankly, a dirty secret that has had its time.

We won't rest until we have achieved a global ban. But as Brazil now turns its attention to hosting the beautiful game, we couldn't be more delighted that the country has shown great leadership and made cosmetics beautiful too. 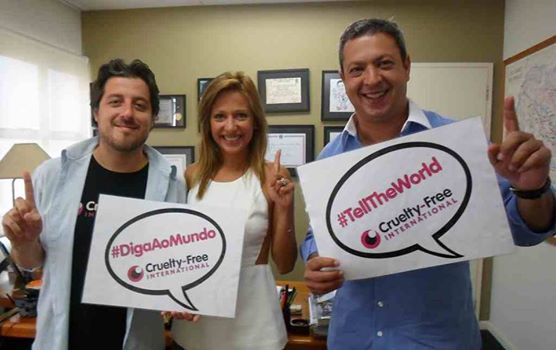