Brazilian tour guide Thiago Firmino notices that the two cable cars servicing the working-class neighborhood of Dona Marta, on a steep hillside overlooking Rio, are out of order.

He quickly snaps a photo with his smartphone and sends a complaint via Twitter to the governor of Rio de Janeiro state.

Firmino, 32, always has his smartphone at the ready. In fact, he has two -- with different service providers. If he needs to connect with clients, he can. If there is a pothole or broken street light, he complains instantly.

His phones, he says, give him great freedom.

With mass protests sweeping Brazil over public services, corruption and the elevated cost of the 2014 World Cup, mobile phones have become indispensable tools. And that connectivity is finally reaching into some of the most forgotten corners of Rio -- the city's sprawling favelas.

"It was like a small revolution was taking place little by little," says Firmino, who has a blog for his tour guide business, and accounts on Facebook, Twitter and YouTube. In his free time, he works as a disc jockey.

"We exchange text messages, use smartphone apps to send short messages, and we coordinate for protests," said Firmino, who says he always goes to the demonstrations with his phones fully charged to take photos and tweet them.

Dona Marta, a pocket of poverty in the wealthy southern part of Rio that sees major tourist traffic, was one of the first of the city's shanty towns to be "pacified" by police and taken over from drug gangs in 2008.

In 2011, it also became the first favela to have free wi-fi access.

As of late January, the National Telecommunications Agency (ANATEL) says there were 262.2 million mobile phones operational in Brazil -- a country of 194 million and the world's seventh largest economy.

On average, 30 phones are sold in the country every minute, according to consulting firm LCA.

But the infrastructure can be spotty. In Dona Marta, residents sometimes gather at night in a neighborhood plaza where the signal is strongest.

"Everyone comes to the plaza to use Facebook," said 21-year-old Daiana Santos.

As of March, some 73 million Brazilians had Facebook accounts, six times more than in February 2012, according to company officials in Brazil.

"This new class of consumer wants to have access to this type of technology, and the favela resident already has the necessary access to credit to make these purchases," said Luis Anavitarte, vice president of polling in emerging markets for Gartner Consulting.

Over the past decade, 40 million Brazilians entered the country's growing middle class, in part due to government social programs. Many of them also want to join the 21st century communications revolution.

The potential for mobile phone growth in Brazil is enormous -- proportionally two times higher than that of India, another powerful emerging economy, Anavitarte said.

"In 2013, the expenditure on technology in general by Brazilians should reach $123 billion," he predicted.

About 14 percent of Brazil's population, or 27 million people, has a smartphone, according to a study by Our Mobile Planet carried out for Ipsos.

Fifteen years ago, the favelas did not even have fixed-line telephones, said Sara Machado, 52, a resident of Chapeu Mangueira, located just steps away from Rio's famed Copacabana beach.

"Now we find out about everything thanks to this small device," said Machado, who has a mobile phone but has not yet upgraded to a smartphone.

Wireless access has allowed the rest of Brazil to get to know the favelas, and vice-versa, said Sivaldo Pereira, an expert in contemporary culture at the Federal University of Alagoas.

"Those who do not have a mobile phone are prisoners on the high mountain -- they do not expand their horizons," he said. 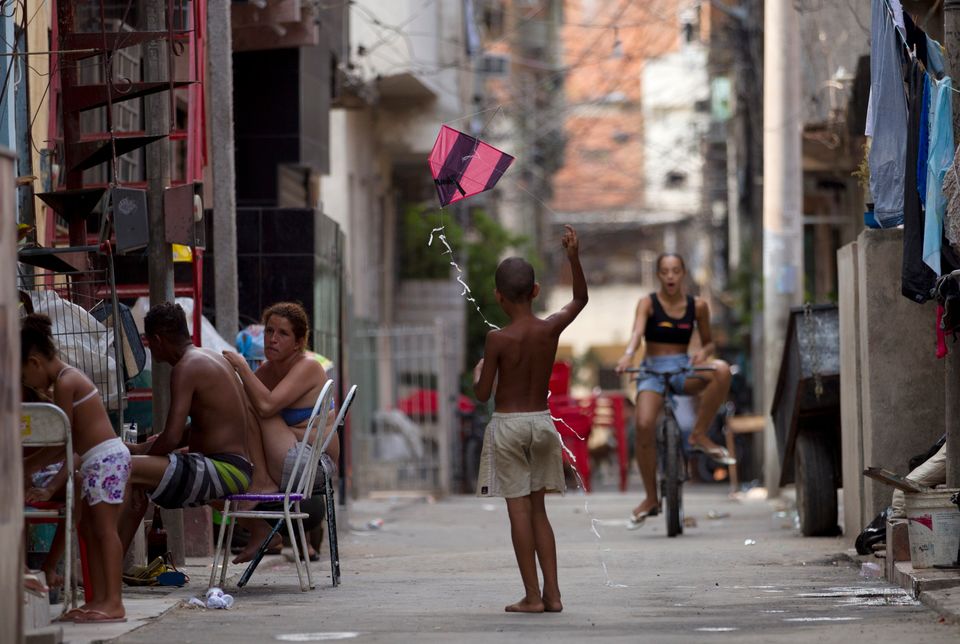 1 / 6
In this Dec. 28, 2012 photo, a child flies a kite in the Mare shantytown in Rio de Janeiro, Brazil. The city's densest neighborhoods, its favelas, or shantytowns blanket entire hillsides, providing most of the city's affordable housing. Now, those communities are being charted after decades of informality, each route and alley outlined and their names researched. Being left off the map had meant whole communities were unable to receive mail at home. It had also blocked people from giving required information on job applications, getting a bank account or telling the police or fire department where to go in an emergency call. (AP Photo/Silvia Izquierdo)
AP