The World Cup is a mere 30 days away, and the #NãoVaiTerCopa (#ThereWillBeNoCup) movement persists. While large numbers of Brazilians will be watching the matches, different groups will be carrying out protests against the World Cup. Aware of a possible repeat of June 2013, the federal government is preparing to crack down on possible acts of vandalism and prevent Brazil's image from being tarnished in front of tourists and the foreign press.

"It is certain that there will be demonstrations, but we are not able to discern their magnitude," says political scientist Carlos Melo, from Insper, a research and education institute in Sao Paulo. He explains that today, dissatisfied sectors of the population are able to connect more easily through social networks, and get involved in worldwide events such as the Arab Spring, Occupy Wall Street and #vemprarua (#cometothestreets) in Brazil. Many groups are currently planning protests throughout the country. In Rio de Janeiro, the Independent Popular Front invokes an "artistic scream" against the Cup through a festival of performances and cultural interventions that will take place on Friday May 16.

In Sao Paulo, the next event will be held on Thursday May 15, organized by the Sao Paulo Popular Committee of the World Cup. The commission, which calls itself nonpartisan, is leading a front for the "international struggle against the FIFA Cup."

Twenty-year-old student Fabricio Mendes plans to take part in new events of the #NãoVaiTerCopa movement in São Paulo, including during the World Cup. As a militant of the Housing for All movement, he criticizes the billions spent to host the competition and the property seizures that occurred to build stadiums.

"At the moment, the World Cup is not a necessity; Brazil should have other priorities, such as housing and health care for the population," he argues.

However, participation in the protests or to the events set up through Facebook is much lower than that recorded in last year’s demonstrations. By the time this article was published, just over 3,500 had confirmed presence in the events in Sao Paulo and 1,000 in the ones in Rio. An average of 2,000 people in the city of Sao Paulo have taken to the streets in organized acts over the last six months, according to Brasil Post.

The number of protesters is much smaller than in June last year, when approximately 100,000 participated in protests in Sao Paulo alone. International Protests

The Popular Committee of the World Cup prepared a report in English spreading a rather pessimistic message about the championship abroad. According to the document, the 2014 World Cup has caused the deaths of workers, sexual exploitation of children and teenagers, violence against homeless people and the expulsion of 250,000 people from the area where they lived due to the construction of the different stadiums.

The Anarchist Black Cross group of Rio de Janeiro organized a European "tour" against the World Cup. The collective has already been to France, Germany, Belgium, the Czech Republic and Poland to explain the conflicts at stake to foreign militants.

On May 12, a violent protest took place in Berlin. The Brazilian Embassy in the German capital was targeted by a hooded group of radical leftists. The embassy was stoned, and the perpetrators published a manifesto online stating that the act was against World Cup overspending.

For political scientist David Fleischer, professor at the University of Brasilia, the demonstrations in Brazil will be worse this year, compared to the ones during the Confederations Cup last year.

"The whole world will be watching -- which is an incentive to large, expansive and violent protests," he explains. Demobilization Strategy

To avoid the chaos generated by demonstrations, the federal government is working on two fronts. The first is equipping security forces to ensure repression of vandalism. The second is the demobilization of street protests.

Authorities in the capital Brasilia try to give the World Cup the typical festive imprint, characteristic of competition seasons, in order to minimize the events that oppose it.

"Soccer is part of Brazil’s national identity," said the Sports Ministry, in a statement sent to Brasil Post on May 12. "When the delegations will arrive, and the start date of the championship will approach, a festive mood will take over and there will be no room for violent protests."

Sports Minister Aldo Rebelo asserted early March that the number of protests would decrease during the World Cup.

"People will be more concerned with celebrating rather than protesting," he said in an interview with BBC Brazil.

Alongside the upbeat talk about national unity, the federal and state governments will employ other devices to deflate the protests.

"Full or partial holidays will be proclaimed to get people out of the streets, to relieve the pressure," says political scientist Carlos Melo, from Insper. Repression Against Vandalism

The government estimates it will spend billions on security for the World Cup. The money will be invested in protecting stadiums, delegations and players. But a crackdown on the most enthusiastic protesters is also among the options being contemplated by the federal government.

"Violence, vandalism and looting is illegal and can’t be tolerated," said a spokesperson for the Ministry of Sports, in a statement sent to Brasil Post. The ministry stressed that the right to demonstrations will be respected, as long as people go to the streets "peacefully."

According to the G1 website, the military police increased their stock of non-lethal weapons for the Cup. From June 2013, when the demonstrations erupted, to April this year, more than 270,000 grenades and tear gas canisters were purchased.

Partnerships with state departments of security and with other countries were signed by the federal government.

"Brazil has proven that it has institutions to rise to this challenge by successfully carrying out major events in the past year, such as the Confederations Cup and the World Youth Day," says the Ministry of Sport.

This piece was translated from Portuguese and originally appeared on Brasil Post.

In Brazil, Protesters And Government Prepare To Face Off Ahead Of The World Cup
Rio Clashes Erupt Over Bus Fare Hike 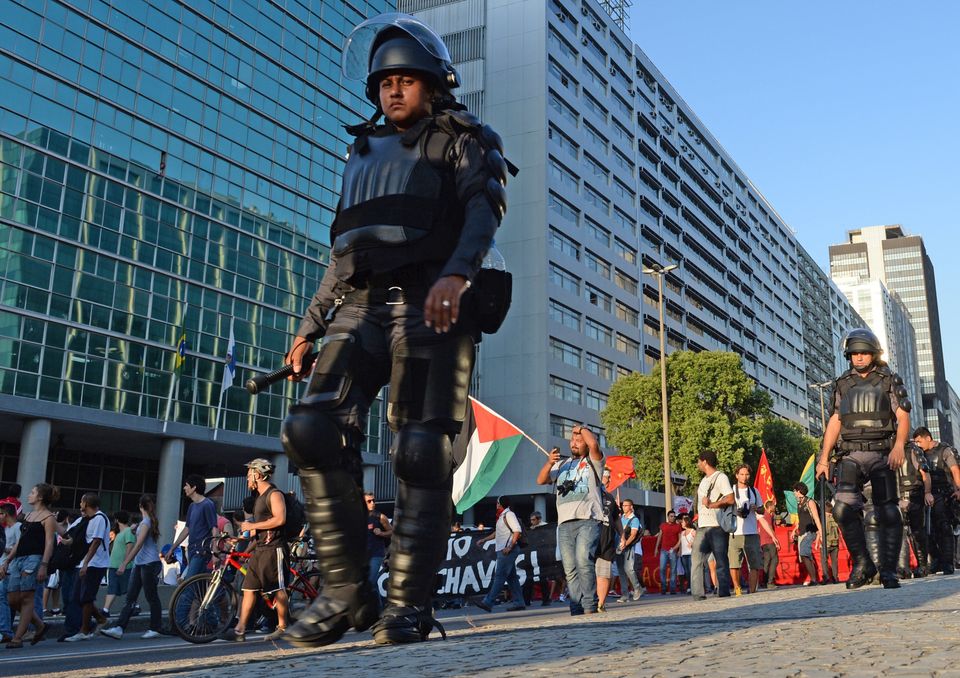 1 / 8
People march next to members of the Special Police Operations Battalion (BOPE) along Presidente Vargas avenue, in downtown Rio de Janeiro, during a protest against a hike on bus fare on February 6, 2014. (VANDERLEI ALMEIDA/AFP/Getty Images)
Getty Images