"Brazil is hosting it, but it's not for the Brazilian people. The lower classes won't be able to buy tickets." - Romário de Souza Faria

The injury to Neymar, Brazil's star forward, could be the best thing to happen to the country in a long time. Why? Because now, maybe, hopefully, Brazil won't win the World Cup.

On Tuesday, when they take on Germany, the World Cup won't have anything to do with income inequality or displaced citizens or the massive debt around the corner for Brazil. It will be all about Neymar's injury, Silva's suspension, whether Brazil can overcome it and a fan base primed to be drunk on victory.

If Brazil manages to win Tuesday, they'll take on either the Netherlands or Argentina in the final, and you can bet your bottom dollar the Brazilian government will be ready to propagate a World Cup win as a win for Brazil. But don't be fooled.

In a country where the average monthly income is $680, a country where millions make a life for themselves on a fraction of that, billions of dollars are being pumped into soccer stadiums. A World Cup win, and the boost in positivity surrounding soccer that would follow, is the last thing this country needs.

The words of Romário, who was Brazil's World Cup hero in 1994, echo a sentiment that has been growing in Brazil since it was announced that they'd be hosting the World Cup. It is a sentiment that is now taking on new weight as Brazil closes in on a World Cup victory.

But, Romário's words only speak to the least of Brazil's worries. As the megalithic event has arrived, buying tickets is the last thing the poor and underprivileged in Brazil are thinking about.

Instead, they may point to the 15,000 displaced people in Rio alone. Or the $11.5 billion of expenses -- $3.6 billion of which are taxpayer dollars -- on this World Cup, making it the most expensive ever. They might even add that four of the 12 stadiums that $11.5 billion was spent on weren't even required by FIFA.

You might expect a Brazilian to be wishing for goals and assists, but all the more likely, a Brazilian will explain how they wish that money went to the bullet train in Sao Paulo, or to the poor, or to education, or to improving the airports, which are currently using tents as terminals.

"I will cheer for Brazil as always, but for the first time I don't want them to win," Jose Erivaldo Costa, a hotel worker from Rio de Janeiro, told Christina Lamb of the Sunday Times this month. "If we win the government will use it as an opportunity to say what a success it has been and to mask all our problems."

This neglect has led to groups like Sao Paulo's People's Committee of the Cup, whose members came together three years ago to fight the injustices that would come with the event.

"The cup affects various populations, like the mobile vendors who can't go near the stadiums or near Fan Fest," Vanesa Dos Santos, another organizer, told the International Business Times. "It affects the prostitutes, many of them children, who will be taken advantage of during the Cup."

Inside these billion dollar stadiums are resources Brazil's people need, not their footballers; solar power technology and thousands of workers who could be constructing public facilities, to name just two. Instead, money like the $280 million invested into Corinthians' stadium will never be seen by the Brazilian people. That's money for grass and retractable seats and scoreboards and massive television screens. Money that could be distributed to the young or the poor in a country that boasts the thirteenth worst economic inequality on the planet.

"That money could have been invested in homes, schools or universities," Tita Reis, a member of the People's Committee of the World Cup, told the Brazilian newspaper O Globo.

But, there is the other side of the story:

"The idea was to build the best, biggest shopping mall in the world, with a soccer field in the middle," Andrés Sánchez, the former Corinthians president, told The New Yorker.

His words, not mine.

As has been discussed thoroughly in the last few weeks, FIFA has proven itself to be a mafia-like-corruption-filled-money-hungry organization rivaled by few. Team them with a government notorious for poor planning, and the result is predictable. 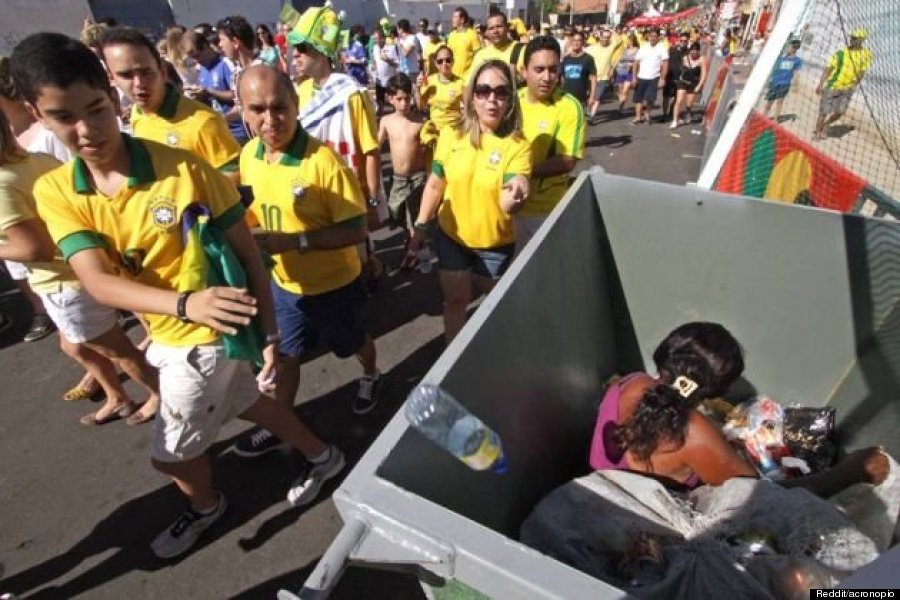 Now, the plan is beginning to unravel. Iron ore and oil, two of Brazil's commodities the economy is built on, aren't increasing in price the way they expected. Half of the country's rural population doesn't have access to their basic needs; things like clean drinking water. According to the Institute of Applied Economic Research, the country lacks 5.24 million homes it desperately needs. Oh, and stadiums like Arena da Amazonia -- which currently lacks a corporate buyer -- will require around $250,000 in maintenance fees every month. As of now, who will pay that fee is a giant mystery.

That might explain why in a recent Pew Research Center survey, 61 percent of Brazilian respondents said it was a bad place place to host the World Cup because it would suck away resources for schools, health care and other public services. A mere 34 percent were working under the impression it would create jobs and help the economy in the 12 host cities.

Adding insult to injury is the simple fact that most of Brazil's people can't even afford to attend a game. Only one million of the three million tickets available will be sold in the Brazilian market, and those are priced at well over $100 each.

Of course, things could be worse for FIFA, who is set to come out of the 2014 World Cup $4 billion richer and with new friends in the Brazilian government.

So why root for a Brazilian loss? Because if they win, the cries of the poor and desperate in Brazil will be drowned out by the cheers of the soccer-crazed fans who could actually afford to get inside the stadium. If they lose, the silence of defeat might give those cries a chance to be heard across the country and the world.