Every four years, the world unites together for the love of football in what is a nationalistic tournament of endless excitement. As the best teams from all over the globe go head-to-head, FIFA World Cup 2014 has been no less exhilarating. Many beloved players have once again won the hearts of their fans, while many countries have gone beyond the expectations set out for them.

However, beyond the cheering crowds within the walls of the stadium, there is much more than talk of football taking place. Putting on a nation-wide event such as the World Cup is definitely no easy feat and, when one looks beyond the crowds, this proves to be the case this time around as well. In order to ensure the success of the tournament, the government has used an extremely high portion of public funds for the development of stadiums, roads, airports and railway systems.

Yet, many Brasilians are unhappy with the government's decision because they believe the funds could have been used to improve basic human services that could have radically improved the lives of so many. The long-term economic gain for individual citizens from a large sporting event is also known to be limited. Thousands have expressed their anger in demonstrations due to what many deem a hypocrisy on the end of the government--only to be met by rubber bullets and hostility. 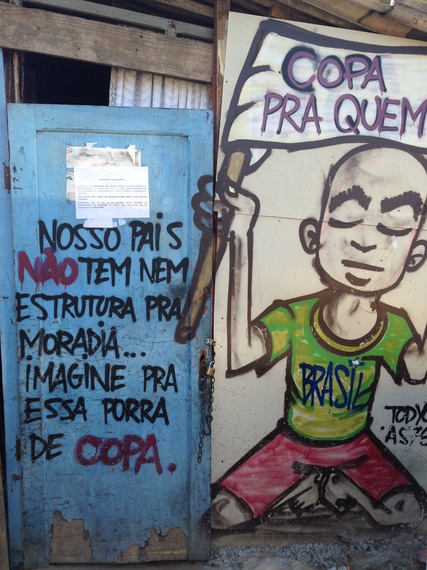 This past fall, I had the incredible opportunity to study abroad in Brasil with an interdisciplinary urban studies program called IHP Cities in the 21st Century: People, Planning, and Politics. I lived with a host family in São Paolo, not too far from where many of the protests have taken place. Being caught amid protests and attempting to understand local opinions helped me realize that this tournament was much more than just about soccer. As our academic coursework was heavily based on fieldwork, not only did I have a chance to learn why many Brasilians were angry, but I was also able to directly witness the consequences of the development that took place in preparation for the World Cup.

Although each citizen has their own specific cause to voice, there are many crucial issues that are just not getting the proper attention they deserve. According to "The World Cup: Brazil's Paradox", São Paulo alone has a metropolitan population of over 20 million. Because of the population crisis in the nation and the excruciating inequality that follows, the government fails to make major improvements to fundamental infrastructure needed for all its citizens--improvements that could have benefitted from the financial resources invested for the World Cup. As a result, adequate housing, transportation, water, and electricity are just not readily available for everyone and are among services that Brasilians want the government to improve.

Looking specifically at the informal settlements that are now an inherent part of the urban landscape, thousands of Brasilians are currently living in makeshift shacks on unsafe land with few basic resources. From my own personal travels, I noticed that many in these communities do not have the basic human services of readily available bathrooms, proper sewage systems, and access to proper drinking water among others. The struggle for land rights is especially prevalent for these communities as thousands of Brasilians can be forced to relocate without much prior notice at the choice of the government (which has been the case for people settled around the stadiums).

Many other basic services, such as education, also require heavy financial investment. Public school teachers, a driving force of the protests around Brasil, are paid extremely paltry amounts compared to the number of hours they put in. Though many Brasilians acknowledge the importance of education, the minimal monetary support that teachers receive highlights a lack of investment for a profession that determines the future of the next generation. During a visit to Rio de Janeiro at the end of September, teachers had gone on strike and have even set up camps in the heart of the city in order to make these issues known.

On top of all the issues, the government has responded to these questions, challenges and protests quite violently. In many ways, political dialogue of the nation fails to address the frustrations expressed by its citizens regarding the allocation of funds. Rather than having their concerns heard and incorporated, protesters have continuously been targeted by the government for bringing forth vital concerns. By continuously having their demands ignored, they continue to lack proper access to the resources their Constitution outlines--something that will continue to be the case if proper plans for development are not put into place. 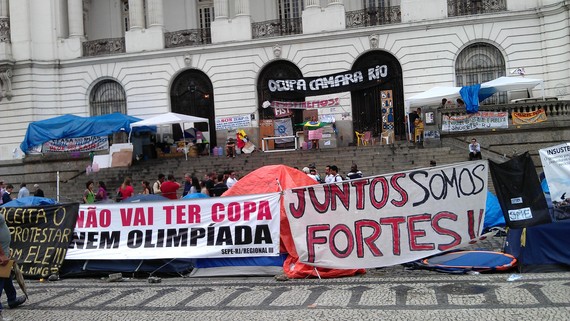 So what does this all mean in the context of the World Cup today? At this point, the government cannot change the way public funds are allocated and the issues presented here are just a few of the many struggles the Brasilian people face. The Cup is in its final stages and what is done is done. Yet, it is stillimportant for us, as fans, to be conscious of all the problems that are present behind the organizing of the tournament. Our entertainment through this global event comes through the opportunity cost of many people's livelihood, political voices and public resources. Moving forward, it is necessary for us to develop a collective conscious behind what is at stake for economically developing countries that serve as hosts for events like the World Cup.

However, as the tournament heads into the final stages, what do all the protests mean for Brasil's football team? More than just the desire to win at home, they are representing a nation that has put a lot at stake and has made many sacrifices to ensure that this tournament can happen. Though the number of goals made will still only determine the match, the World Cup cost many of its citizens their political freedom, their homes and many fundamental resources.

Brasil winning the World Cup could be a small moment of reconciliation for the nation's struggle, potentially helping to heal the wounds of what is lost. However, win or lose, I hope that the efforts of Brasilians to bring attention to crucial issues are worth it and the nation can move on to focus on what is important for the long-term gain of its people. That's why for the rest of the way, I will not just be rooting for Brasil's soccer team, but for the wellbeing of the country as a whole. 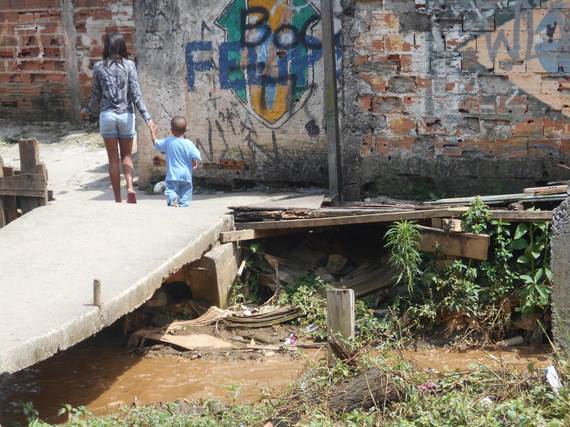