Hawaii gets a lot of flak for being behind on trends, but when it comes to swimwear, the Aloha state is definitely ahead of the curve.

And we know something mainland beaches don't: cheeky bikini bottoms are about to sweep the nation.

The Brazilian bikini bottom -- the barely-there style of the '80s -- has been resurrected in new and more modest ways, and this time, bikini experts say, it's here to stay. 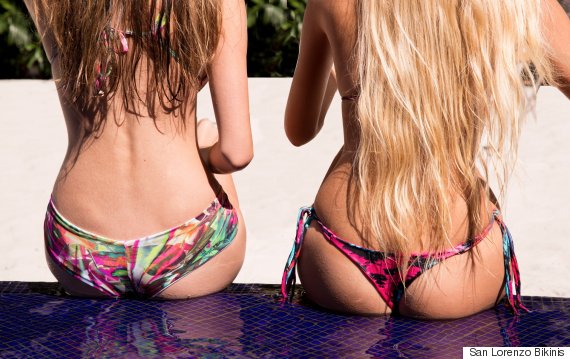 You Can Thank/Blame Social Media

Wilson has been designing all types of bikinis for 30 years. When she first opened her boutique on Maui, Brazilian-cut and thong bikinis weren't in much demand. Now, Wilson says, they make up 75 to 80 percent of her overall sales.

The resurgence has swept Hawaii over the past five years, and signs of it are just now beginning to pop up on the mainland. Victoria's Secret, perhaps the most mainstream swimwear brand, has introduced an "Itsy" option as well as a "Cheeky" option, and San Lorenzo, the Hawaii-based boutique that specializes in the Brazilian-cut, has recently branched out with stores in Newport Beach and Malibu as well as a pop up shop in the Hamptons -- the paragon of East Coast prep and propriety.

Those in the industry say the surge in popularity may be related to the rise of social media.

Sabra Krock, creative director for the swim boutique Everything But Water, told The Daily Beast that the recent "fitness craze" is to thank for the cheeky trend, "as well as the Instagram and selfie voyeurism that's online," she said.

"I definitely point to Instagram as a key reason for a desire to emulate celebrities," she said.

The trend may have only recently reignited, but Mariella St. John, marketing director for San Lorenzo Bikinis, says that this style "is one that you can never go back on."

These new designs, Wilson says, are "turning into g-strings again, but with more details, like a waistband, or shorts that still fit you in a way a [thong] would."

Contrary to what you may think, Wilson explained, smaller bikini bottoms have a "slimming effect" on your rear end.

"Women are starting to realize that the [smaller cuts] are more flattering," she said.

When choosing the right cut, Emma Wo, fashion blogger at AlohaBabe.net and Miss Hawaii 2015, says "it's important to find a style that works well with your body type. Brazilian-cut bikinis can seem daunting at first," she told HuffPost, "but if you’ve got curves, full-coverage bikinis can actually make you look wider."

"When customers, who have never worn our bikinis, come into the store, we tell them, 'We're going to convert you,'" St. John said. When her customers find the right fit of a cheeky bikini and then go back to a traditional cut, they often tell her that the regular bottoms feel like a "diaper."

For comparison, here's a traditional cut next to a Brazilian cut on the same model at a San Lorenzo boutique: 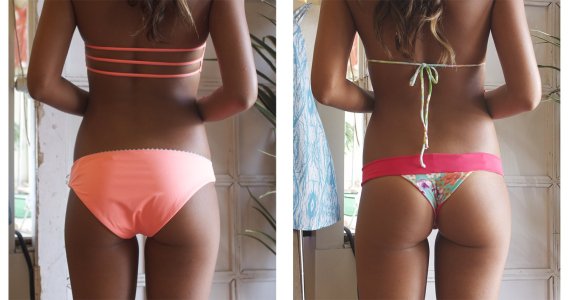 If you're shy about jumping in to a full Brazilian bikini, Naomi Newirth, co-designer of Acacia Swimwear, says to find somewhere in between and start there -- "not full coverage and not a total Brazilian cut," she told HuffPost, "no extra sag or fabric."

If you're still nervous about making the switch, bikini blogger Rebekah Steen of Gold Fish Kiss says, "Just give it a shot. At least once. Life’s short, try it out, and get some sun on your buns. You’ll be surprised how wearing just a little less fabric on your bum makes it look just that much better."

Below, we've rounded up some of the best in-between cheeky bikinis so you can try the trend out for yourself.