He punches hard, he's opinionated, his commentary is biting, his cartoons are thought provoking, and he doesn't regret being a magnet for nasty criticism.

He is Brazilian cartoonist Carlos Latuff who doesn't mince words or hold back on stirring up people, in his country and across continents. 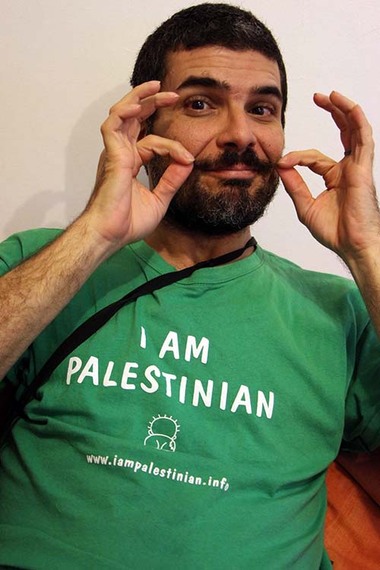 "I got threats from cops, Zionists, Islamists, neo-Nazis - the list is long," he said of his many detractors who have tried to intimidate him on different occasions.

So much so that an American rabbi who called him an anti-Semite castigated the Huffington Post for publishing his cartoons.

Eddy Portnoy, who reviewed Joel Kotek's book "Cartoons and Extremism: Israel and the Jews in Arab and Western Media" in the progressive Jewish publication The Forward wrote that Latuff's material was furiously critical of Israel and its leaders in often terribly obnoxious ways.

"His work will surely upset even nominal supporters of Israel, but it is a stretch to categorize his cartoons as antisemitic, and it is a disservice to the fight against genuine antisemitism to have included them," Portnoy added.

Latuff is unrepentant about his scathing remarks and illustrations. He loves being provocative.

"One of the most notorious threats was in 2006 by a website linked to the Likud," Latuff noted of the online denunciation by the site close to Israel's right-wing government. 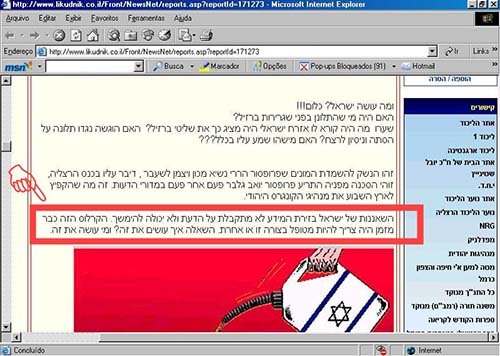 Screen shot of Likud-linked site that Latuff said attacked him

I asked why he feels so strongly about an issue so far removed geographically since he is not Palestinian - his grandfather hailed from Lebanon.

"I have supported their cause since I visited the West Bank in 1998," he said.

In a recent cartoon with an Israeli soldier in the likeness of Mark Zuckerberg standing guard at Israel's "separation wall" and barring a Palestinian youth from entering Facebook, Latuff slammed the social media site for censoring a cartoon critical of Israel. 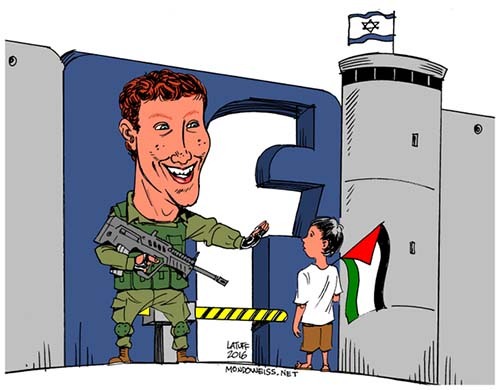 In another he took aim at U.S. presidential candidates Hillary Clinton and Donald Trump for groveling at Israel's feet to curry favor with American Jews and pro-Israel campaign contributors. 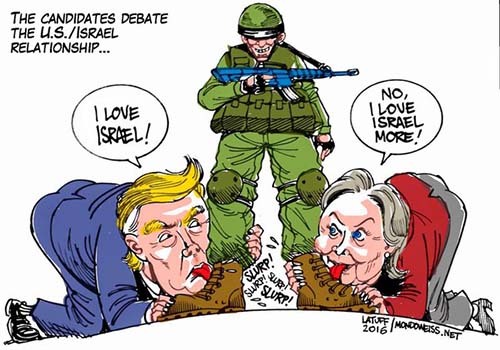 Latuff also turns his gibes at his country's authorities.

In one illustration he denounced Brazilian police's excessive use of force and tweeted that if there were a "violence-o-meter" in the country, the São Paolo police would top the gauge.

Screen shot of "If in #Brazil we had a 'violence-o-meter,' surely the São Paulo
police @PMESP would reach the peak!"

Latuff's graffiti and cartoons about police brutality earned him arrests in his hometown of Rio de Janeiro.

"They were mostly attempts (at) censorship (of) my work in Brazil," he explained, adding that highlighting law enforcement officers' heavy-handedness was a taboo subject.

Asked what inspires him and triggers his creative juices, Latuff replied: "Some issues boil my blood, like police brutality in Brazil and elsewhere, state terrorism, censorship."

The U.S. gun violence and race debate also come out loud and clear in his cartoons. He's squarely against what he sees as double standards in how American police officers respond to perceived threats by blacks, minorities and whites. 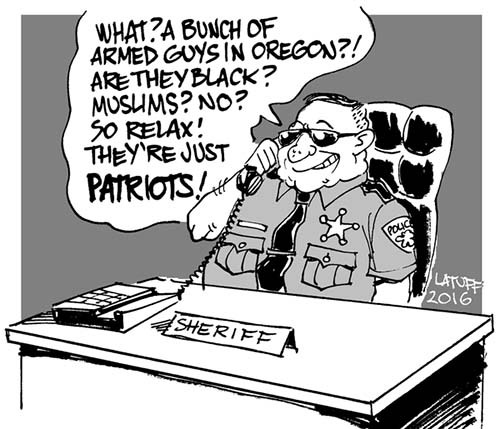 He also disparaged President Barack Obama's tear-shedding speech about guns in America while the U.S. provides weapons to what he termed Syrian mercenaries killing civilians. 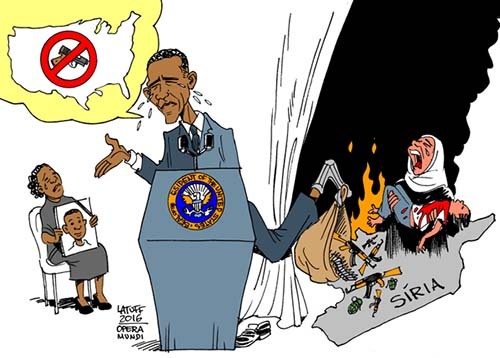 Screen shot of "When will you stop sending weapons to #Syria mercenaries
(a.k.a. rebels)? #AskPOTUS"

But Latuff's attacks aren't limited to the West.

He recently took a swipe at Egyptian President Abdel Fattah El-Sisi, portraying him as a puppeteer in military garb manipulating Egypt's recent legislative elections to ensure his supporters' victory. 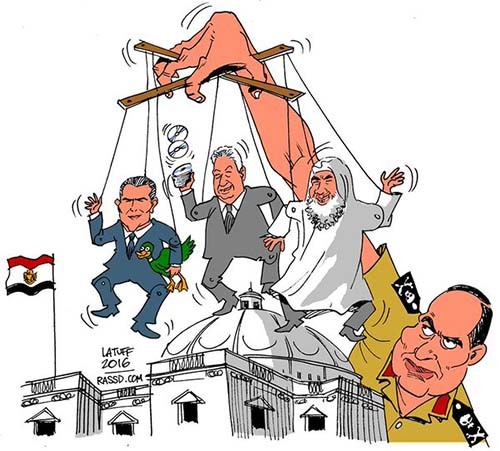 Turkish President Recep Tayyib Erdogan is another favorite target, notably his edicts against journalists and free speech campaigners. In fact, Latuff often tweets remarks in Turkish to accompany his cartoons.

I asked him if he spoke Arabic and if he was conversant in different languages since his tweets often appear in any number of languages.

"No, I ask friends to translate," he said.

The Middle East's volatile Sunni-Shiite schism is equally in Latuff's crosshairs, with an Arab and an Iranian each carrying a barrel of gunpowder and trying to ignite each other's trailing explosive material. 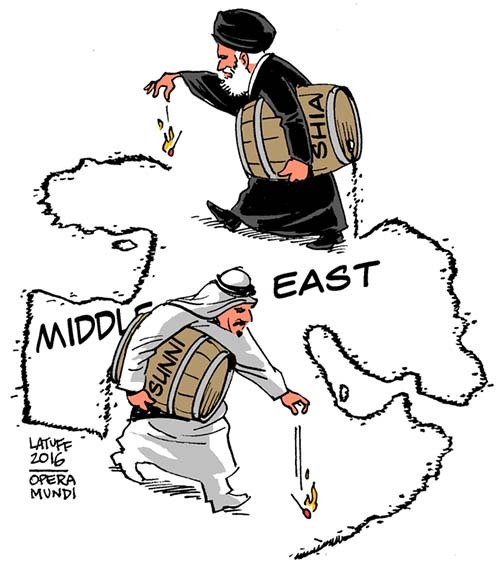 Further east, the cartoonist turns his sights to North Korea's volatile leader Kim Jong-un drawing him at the center of a nuclear hazardous material sign. 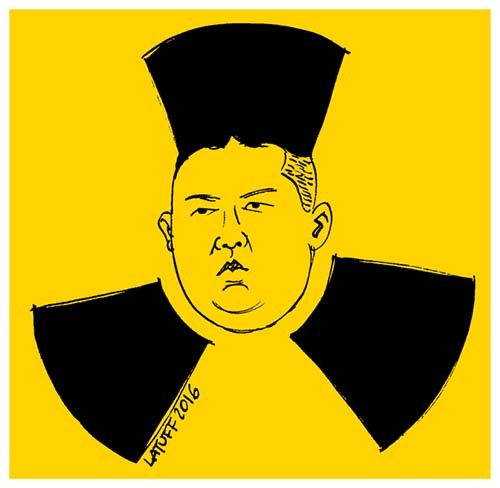 This week Latuff drew the Grim Reaper listing cities where he'd wreaked terrorism havoc and the cartoonist expressed solidarity with Indonesians through the "Pray for Jakarta" hashtag. 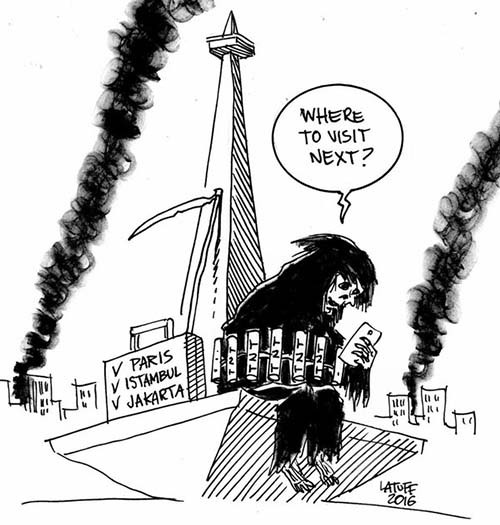 Earlier this month he revived a 2012 illustration of French caricaturist Stéphane Charbonnier, a/k/a Charb, one of the Charlie Hebdo cartoonists killed in an attack on that Paris publication to mark the first anniversary of the massacre. 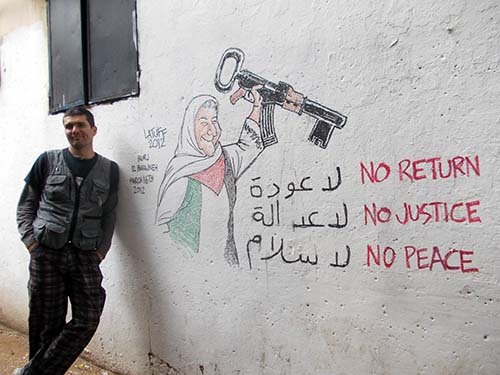