The Premiere Brazil! 2010 film festival, hosted by the Museum of Modern Art (NY) and the Rio Film Festival, produced a line up of films that can best be described as the art of social activism. Beyond the sensuality that Brazil is famous for, the country produces a culture that ingeniously uses art as a platform for social change and justice.

What is most intriguing is the way the artists go about doing it. Brazilian artists are sublimely subversive in their use of content and technique. They produce social revolutions that spread like slow burning fires, throughout the collective conscious of the general public. First you see the beauty of the flame, then you feel the heat, and then you realize that everything has changed.

To understand where Brazilian artists are coming from, you must first know where they have been. Turning back the clock, director Ana Maria Magalhaes brings us Reidy, Building Utopia, which on the surface is a film about Alfonso Eduardo Reidy, the visionary Brazilian architect who produced stunning buildings and ground breaking architectural concepts during the 1950's and 1960's. The surprise of the film is the fact that Reidy's work, was and still is a perfect disguise for subversive social activism.

The film reveals that Reidy and his proteges use architecture as a tool for combating 'urban apartheid' (the deliberate zoning of rich and poor areas of a city) and for proliferating beauty throughout the social landscape (low income housing with public art and custom designed landscaping). Reidy and the architects who have followed in his blueprints, believe that 'Cites are desires made of concrete' and 'Today's dreams are tomorrow's truth'. 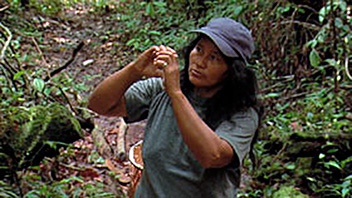 In this day and age, the definition of truth can be an ever shifting line in the sand. The film Terra examines the idea and lines of urbanization, society and tradition, in an area of South America where the territorial lines between Brazil, Colombia and Peru blur geographically and psychologically.

Terra sets the stage for the contrasts of social cohabitation that occur between the indigenous Indians, transient locals and governments. The director uses the camera to seduce the viewer with gorgeous portraits of the people that migrate throughout this ambiguous territory, as well as the kaleidoscope of colors and textures that comprise the land itself. 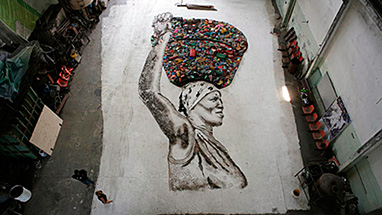 The most poignant film in the festival is Waste Land, which documents the Brazilian artist Vick Muniz as he works collaboratively with catadores (garbage pickers) in Jardim Gramacho, the world's largest landfill, located in Rio de Janeiro. Muniz works with the catadores to produce large scale portraits of the workers. The portraits are composed of the recyclable materials they collect over a three year period. The images are later auctioned and the proceeds go to the workers and the organization that advocates on their behalf.

The journey of their process goes far beyond the traditional scenarios of victims and saviors, Waste Land chronicles the emotional evolution of all the people involved but also challenges the viewer's perception of their own community, class, and consumption. Waste Land is scheduled for wide release in October and will undoubtedly be listed as a must see film. 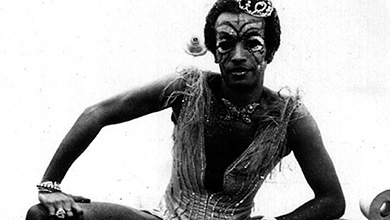 In terms of pure entertainment, Dzi Croquettes is by far the most glamorous and sexy film of the festival. The film chronicles the Brazilian avant garde theater group that basically created glam theater in the early 1970's and heavily influenced the film Cabaret. Dzi Croquettes conception as an all male, openly bi-sexual, political, communal arts group is astounding, considering the fact that they were performing during one of the most oppressive military dictatorships of the 20th century.

In many cases performance art that has been labeled as being 'important' is usually boring, however in this case, the Dzi Croquettes were artistic visionaries, outrageously entertaining and highly intelligent. Fellow Tropicalia, Gilberto Gil summed it up best when he said "Dzi Croquettes is the artistic translation of Brazil's gay movement, but with political content. They were neither men nor women, but people, libertarians."

The Premiere Brazil! 2010 film festival is a cinematic view of the future. The subliminal theme throughout the film series is that the power of art lies in its ability to produce beauty, change, and liberty, if you have the desire for it. This idea will be carried forth in the upcoming Rio Film Festival (Sept. 23-Oct. 10) and the Sao Paulo Art Biennial (Sept. 25-Dec. 12).

Lauri Lyons is the author of Flag: An American Story and Flag International