On June 18th, 19th and 20th, 2015, the Ginga Mundo school of the Brazilian martial art Capoeira will be hosting a Batizado (or "baptism") at Essex Street Academy, 350 Grand Street, Manhattan, along with performances and workshops that are open to all schools as well as open to the public. The event is co-hosted by Ginga Mundo Instructor Pena Verde, Professora Pimentinha, and world famous Capoeira Mestre (or Master) Sabiá, coming directly from Bahia, Brazil. 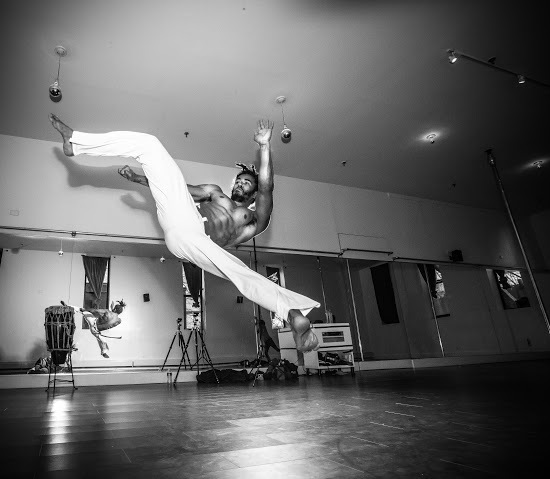 Instructor Pena Verde demonstrating a Capoeira kick called an Armada Martelo at Sacred Studio in Bed-Stuy, Brooklyn, where he teaches class (all levels) on Tuesdays at 6:00pm and Saturdays at 2pm. (Photo by Ace Murray / Brooklyn Juice Photography.)

Capoeira -- pronounced "capo-wey-da" -- is an Afro-Brazilian martial art that combines dance, music, percussion, songs, self-defense techniques and acrobatics. According to legend, Capoeira began over four centuries ago when African slaves in Brazil trained to fight under the guise of dance in order to fool their masters and liberate themselves. Graceful sweeps and cartwheels performed to rhythmic drumming concealed their deadly techniques of attack, defense and trickery...and a totally one-of-a-kind martial art emerged.

Capoeira is played in a circle, called a roda (pronounced "hoda") to the sound of live music -- specifically songs written for the sport, and instruments (the Berimbau, the Atabaque, the Pandeiro and the Agogô) which determine the rhythm, pace and style of game that is played. 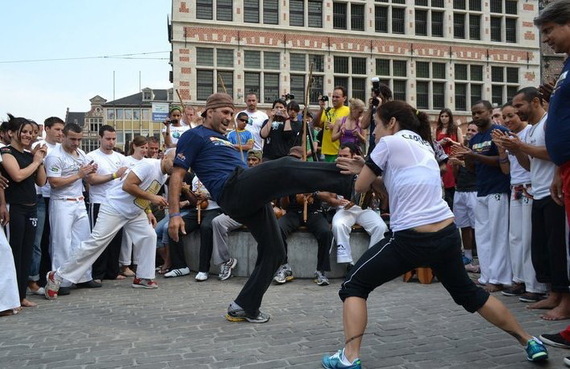 Mestre Sabiá playing with Professora Pimentinha at an outdoor roda in Belgium he organized. As you can see from all the onlookers behind the players, Capoeira always draws a crowd. To see more click here.

Capoeira is, in a word, beautiful, and mesmerizing to watch. There is a joyful and playful spirit to Capoeira (in fact, in Portuguese you joga or play Capoeira) and, because it utilizes dance and acrobatics and players don't just punch, kick and hit each other, there is a mystery and magic to the martial art that make it truly unique.

However, Capoeira is also a dangerous martial art of deception and trickery in which the whimsy of a smiling Capoeirista (as practitioners are called) performing an acrobatic movement (referred to as Floreios -- or flourishes -- in the sport) can turn on a dime into a powerful kick to the torso or take down at the heels that sends the opponent flying across the roda and landing ingloriously on their back. If a real fight has broken out (which can happen amongst the professional ranks) it will lead to real injury. This is a part of what is referred to in the sport as Mandinga, which is the trickery and deception that is central to a powerful Capoeira game because the most successful attempt to kick or take-down your opponent is the one they don't see coming.

A Batizado is a traditional Capoeira event where new players are initiated and Capoeiristas advance in rank. At a typical Batizado world-class professional Capoeiristas from all over the city and the world come to help initiate new players, play each other, and to perform for the audience. I would describe Capoeira in that sphere as a combination between Carnival, Cirque du Soleil and a back-alley favela street-fight. It is truly a sight to behold. And a Batizado is the place to witness it.

Of course, nothing as spectacular as Capoeira comes easy. Unlike many other ancient physical arts that have been commercialized and watered down (think of 6 week online Yoga teaching certificates and Karate Black Belts given out at strip malls) Capoeira has stayed true to the historical standards, thresholds and rigor that make it so spectacular. No amount of money can pay for a rank - it must be earned through years of training - and there are very few Capoeira masters in the world, and those few who have achieved it have devoted their entire lives to the art.

But like any great achievement, gaining any real skill and rank in Capoeira is worth it. And the rigor and rewards can be seen at Pena Verde's classes. 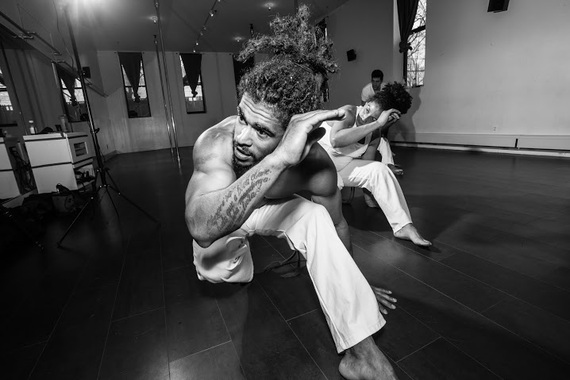 Students train individual movements in formation (such as the Negativa seen above) which are assembled in sequences, and all of which require a tremendous amount of strength, training, agility and flexibility to get right. (Photo by Ace Murray / Brooklyn Juice Photography.) 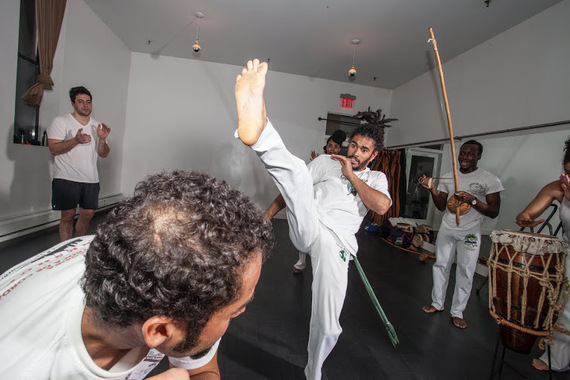 Students learn dozens of basic kicks, ducks and maneuvers which can be assembled in infinite variation, and practice them in a game of constant motion and surprise, as seen above with Pena kicking a Bênção and a student practicing a duck, or Esquiva, all done to the type of game determined by the music. (Photo by Ace Murray / Brooklyn Juice Photography.) 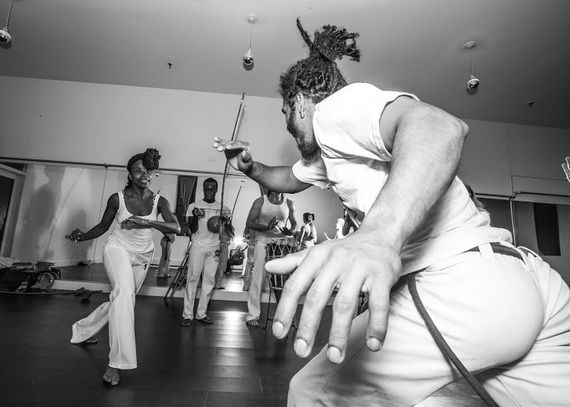 Students spend years learning how to do the first, basic movement of Capoeira, which is the Ginga (or swing), which Pena can be seen teaching a white chord (or beginner) how to do above. (Photo by Ace Murray / Brooklyn Juice Photography.) 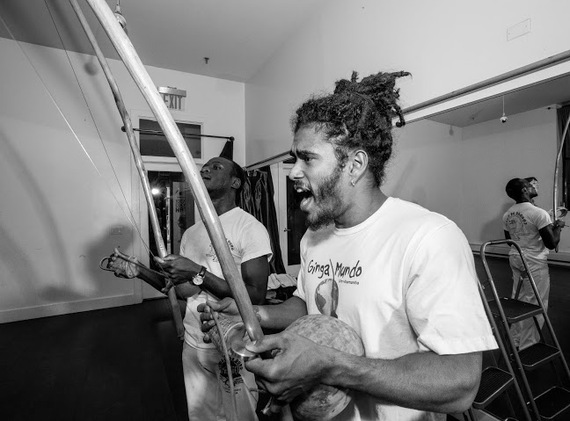 Pena with Cordão de Ouro guest Faisca leading the roda on the Berimbaus. All Capoeiristas must learn how to play the Berimbau, which is the primary instrument of Capoeira. The pace and rhythm of the Berimbau determine what kind of game players play -- São Bento Grande (high, fast and combative); Benguela (medium to slow and more towards the ground); or Angola (a game with a heavier emphasis on trickery played close to the floor). (Photo by Ace Murray / Brooklyn Juice Photography.)

If you want to see the magic, excitement, danger and power of Capoeira up close, or if you want to take the workshops and / or join in playing in a Batizado roda, the Ginga Mundo Batizado is the place to do so. See details below:

The Batizado and workshops will be held at Essex Street Academy, 350 Grand Street, Manhattan. All Capoeira schools welcome, and events and workshops are open to the public.

For all three adult workshops, the Batizado, and an event t-shirt: $105

Family workshop: $25 per child plus one caregiver/parent; $10 suggested donation for each additional family member

Capoeiristas coming to play in the Batizado rodas are asked to purchase an event t-shirt for $25.

Guests coming to watch the Batizados are asked to make a donation of school supplies Essex Street Academy.

To know more about Pena Verde's Ginga Mundo classes and get up to date information on times and dates:

Go to his site.
Or connect with him on Facebook here. 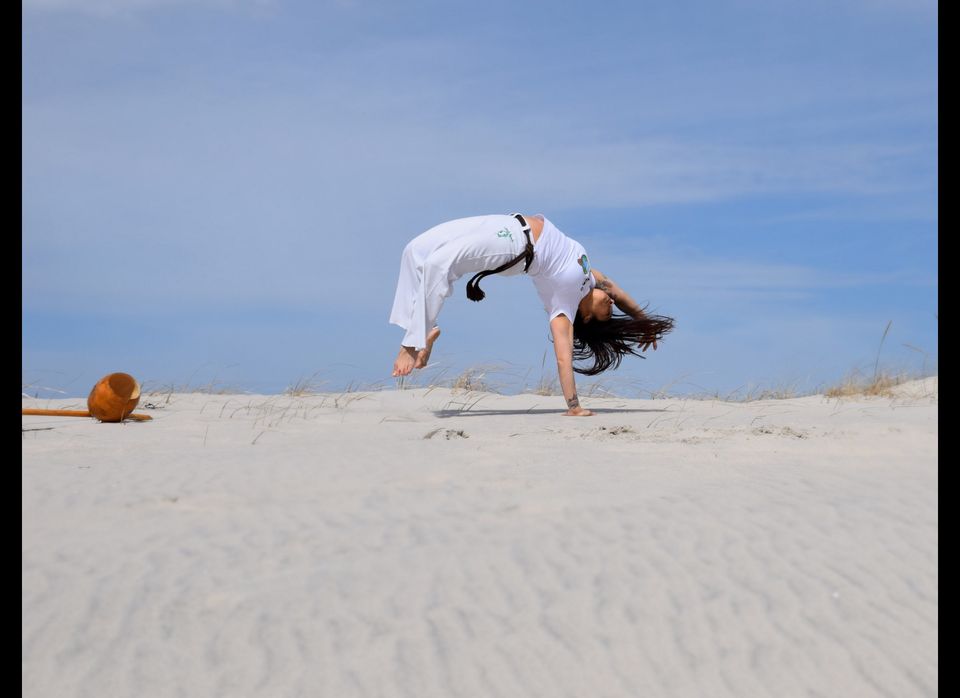