Upon sharing our culture and nationality with someone new, the responses can sometimes surprise us. Be it comical or ignorant, there's almost always something to take away from these exchanges.

Brazilians are widely known for being diverse and loving the beach, but there are more than a few misconceptions about the nation and its people that are usually revealed within minutes of someone finding out you're Brazilian. Sometimes you just can't help but smile at these comments...

"Are you from Rio or São Paulo?"

"You must be really good at soccer..."

It's not like it's a national mutation. Some of us are obviously great, while some of us can't even kick a ball, much less dribble it up and down a field with our feet.

"And you're probably a really great dancer too, right?"

See above. But I'll give it to you ... most of us do have some moves, or at least the ability to fake it if we don't.

"Do you speak Brazilian?"

Come again? I don't think that's actually a thing that exists. Do you perhaps speak American?

Wow, you were closer with "Brazilian."

"The capital of Brazil is Rio, right?"

No, it's really not. It actually hasn't been for a while. Setting the record straight here once and for all: The capital of Brazil is Brasília.

The one-word prolonged reaction is probably the best -- an unfiltered vocal vomit of the first thing that pops into someone's mind after you utter "Brazil."

This is pretty old. As in, I don't think anyone really cares anymore. *Note: I hold the right to revoke the aforementioned claim should I get into an argument with someone from Argentina.

"I love Brazilian food. Can you cook [insert dish here]?"

You think I'm a good cook just because I'm Brazilian, don't you? Yeah, we're not born with that. Although, I'm pretty sure most of us can make you a caipirinha. So cheers.

"Really? You don't look Brazilian. I thought maybe you were [insert other nationality here]."

While you play a guessing game of where I'm from, I'm going to stick with my first answer: I'm Brazilian. We're kind of a melting pot. So if you're expecting me to fulfill your racial stereotype, sorry I'm not sorry.

"That's so cool, so do you see monkeys just running up and down the streets and stuff?"

Um, no. Granted it depends on where you're from (this goes back to the first point), but for the most part I can't recall the last time a monkey jumped on my windshield while I was stuck in traffic in Belo Horizonte.

"Why is your English so good?"

I learned it. You see, we have this thing called school ... There you go, I knew you'd get it.

"Oooo, as in Carnival?" "As in Brazilian waxes?" "As in really small bikinis?"

Yeah, that. Or, as in: fifth most populous country in the world and home to the 2014 FIFA World Cup and 2016 Summer Olympics. But sure ... waxes and stuff.

I guess that's in the eye of the beholder. I also find that this is commonly used when someone just doesn't have anything to contribute.

"I love Brazilians, you guys are always so happy."

Although a funny response, it's kind of true. Sure, we have our bad days, but as a whole Brazilians are some of the most jovial people you'll ever meet.

So no matter how you respond upon meeting us, there's a big chance that we'll still love you anyway!

Full Disclosure: These are real responses that I have personally received from real people. Yes, even the "monkey" one, which was in fact quite recent. 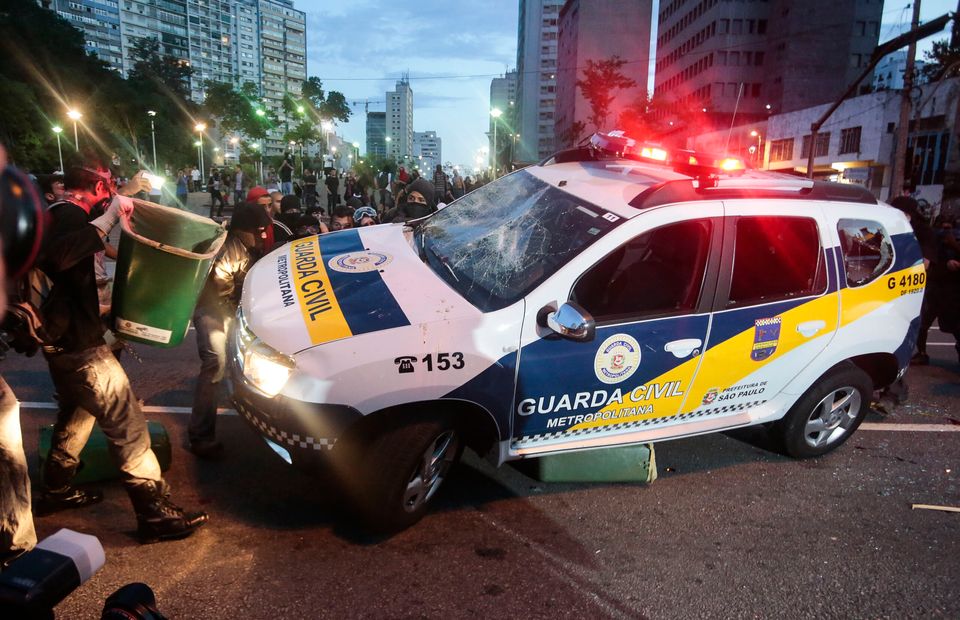 1 / 8
BRAZIL-FBL-WC2014-PROTEST
A civil guard car is attacked by demonstrators during the 'Nao Vai Ter Copa' (You are not going to have Cup) protest along Consolacao Street, in Sao Paulo, Brazil, on January 25, 2014. Brazil was bracing Saturday for a first wave of nationwide demonstrations against staging the World Cup after activists from the protest group Anonymous went on social media calling for action. AFP PHOTO / Miguel SCHINCARIOL (Photo credit should read Miguel Schincariol/AFP/Getty Images)
Getty Images