Who exactly counts as "Latino" and what does the term really mean? This question has prompted a lot of speculation from the U.S. Census Bureau, which is pondering whether it should change the definition of "Latino" from an ethnicity to a race.

Brazilians, in particular, seem to stump a lot of people. And there's a lot of them in the United States. The Brazilian government estimates there's about one million of their nationals living in the United States, while the U.S. government puts the figure at 400,000, according to Fronteras Desk. They speak a Latin-derived language, but it isn't Spanish. So do they count?

The New York Times puzzled over the question back in 2009, asking "Can 'Hispanic immigrants' describe a group that includes Brazilians or other Portuguese speakers?" The author offered no answer, but suggested that "being specific will help minimize confusion or ambiguity.

Whether or not Brazilians qualify as Hispanic depends on how far one stretches the term's historical origins. The word refers to "Hispania," the Roman name for what is today known as the Iberian peninsula, which at the time included Portugal. So technically, Portuguese descendants might qualify as Hispanic, though the preferred term is "Lusitanian" -- also derived from Portugal's Latin name.

But Portuguese-speakers don't include themselves in the definition of "Hispanic," to judge from a couple of dictionaries from both Portugal and Brazil.

Considering that groups have the right to define their own ethnicity, according to International Labor Organization Convention 169 (to which Brazil is a signatory, but the United States is not), it's probably fair to go ahead and leave Portuguese speakers out of the definition of "Hispanic."

But Brazilians are completely and unambiguously Latino. The U.S. term refers to people of Latin American descent and, as we point out in the map above, Brazil is in fact located in Latin America.

Likewise, Brazilians are multiracial, just like other Latinos. When, in 1976, the Brazilian Institute for Geography and Statistics allowed people to write in their own skin color rather than checking off one of four options of white, black, yellow (Asian), and pardo (mixed-race/mulatto) for a survey, the government agency received 135 terms describing people's skin color. Some highlights include "chestnut," "dark white," "cinnamonish," "golden," and "a little yellow."

There's plenty of other reasons to why Brazilians count as Latino. Check them out in the slideshow above. 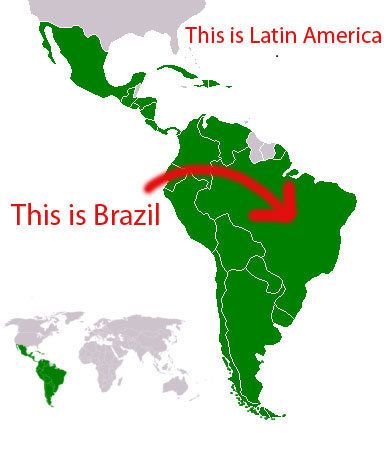 1 / 8
Because Brazil Is In Latin America
This is a dead give away. See map for proof.
WikiCommons