Brazil is on trial, and the world is watching. Marred by corruption scandals, political crises, and weak economics, Brazil, once dubbed the "awakening giant," is now, to some at least, the "laughing stock" of the world.

Last Friday President Dilma Rousseff left office descending a ramp she previously climbed encircled by political allies, including former President Luiz Inácio Lula da Silva. That descent could potentially mark the end of the Workers Party's 13-year rule in Brazil. The Senate voted to strip the President's duties while she is tried for allegedly manipulating the government's books, a maneuver known locally as "pedaladas fiscais". Although the impeachment process is not over many analysts believe that her chances of being reinstated are slim.

I could here offer an opinion on the merits of the impeachment process or pontificate on where President Rousseff went wrong. But I offer instead an alternative narrative, one based on hope and optimism that seeks to interpret the present crisis as a transformative development in Brazil's political evolution, one that seeks to find a glimmer of light amid "the ruins of government".

Evolving Into A Peaceful Democracy

A country can only aspire to democracy. Democratic government is something to be perfected. And the impeachment process, regardless of its merits, is a welcome opportunity to allow Brazilian institutions to investigate its head of state, and potentially remove her, in a peaceful fashion. This is significant because governmental change in Brazil has not always been peaceful. But long gone are the days of the 1964 military coup that threw Brazil into a 20-year military dictatorship.

Tellingly, this is not the first time a Brazilian president is subject to impeachment. In 1992, Fernando Collor, Brazil's first democratically elected head of state since military rule ended, was suspended from his duties due to allegations of corruption. But Collor's and Rousseff's impeachment experiences differ in many ways, and signal that the Brazilian democratic engine is maturing. Whereas Collor's impeachment proceedings commenced within 48 hours of the presentation of a half-page complaint, Rousseff's proceedings took 23 days and was grounded on 128 pages of detailed allegations. Importantly, in both cases, there was no violence.

Nor was there any marked violence in protests against and in support of President Rousseff. Millions of Brazilians flooded the streets earlier this year to voice their opinions peacefully. Though political violence is not unheard of in Brazil, the absence of violence in national protests related to the President and her government is to be welcome. These events could have sparked violent confrontations. After all, Brazil is ranked 103rd in the Global Peace Index, which measures, inter alia, the level of safety and security in society.

Therein lies a powerful lesson: democratic governance is about using civilized tools and dialogue, not violence, to effect political change. Of course, the impeachment process should be invoked by elected officials on behalf of the people, and not as part of a game of thrones plot to usurp power for political purposes.

Bound By Laws, Not Bribes Democracy and the rule of law go hand in hand. The rule of law implies that no one is above the law and everyone is equal before the law regardless of status. Since 2013, Brazilian authorities have been investigating a massive corruption scheme involving Petrobras -- a state-owned oil company -- its contractors, and a number of prominent politicians. Dubbed the "Lava Jato", the investigation has resulted in the arrest and imprisonment of many senior company executives and politicians. Whereas in the old days corruption was quietly accepted as "custo Brasil" -- the cost of doing business in the country, the "Lava Jato" investigation is sending a message to public and private sectors that no one is above the law.

This is a remarkable feat. By the end of the investigation, it may be that corruption will no longer be a defining trait of doing business in Brazil. By tackling head-on the largest corruption scandal in its history, Brazil is setting an invaluable precedent for the rule of law for decades to come. It will also help Brazilians re-define how they see themselves in society: citizens bound by laws, not bribes. 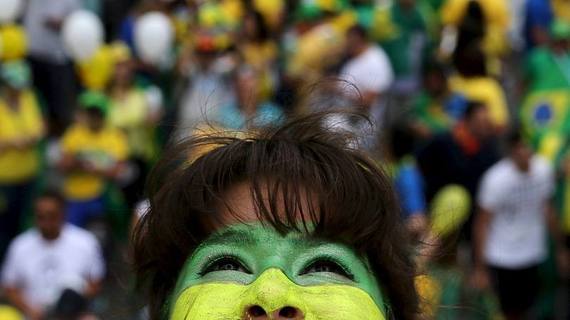 If Brazil Is No Longer A "Poor" Country, What Is It?

In the process of fostering a peaceful democracy and strengthening the rule of law, Brazil also ceased to be the "poor" country it once was. Millions of people have been lifted out of poverty thanks to the Government's conditional cash transfer programs known as Bolsa Familia. Income inequality, once a defining feature of Brazilian society, has declined in the past decade. Lifting people out of poverty helps everyone in the long run because it allows those that were once destitute to regain control over their lives and empower local communities politically, economically and socially. This in turn shifts people's consciousness from a mentality focused on needs ("what can I eat"?) to one that cherishes rights and opportunities ("what can I do with my life?", "how can I help others?", "what can I invent?").

This is not to say that corruption, poverty, and political crises are a thing of the past. Political conflicts complicate the consensus needed to effect change in the economy, particularly in a multi-party system like Brazil. As the economy crunches, people lose their jobs. Corruption corrodes the social fabric by tipping the scales of opportunity in favor of those with deeper pockets. These issues will continue to challenge Brazilian society. But having confronted these issues head-on, Brazil has taken a first step to show the world that politics need not be violent and that corruption need not be accepted without protest. A Brazilian brand of the rule of law is brewing: play by the rules. Period.

While the corruption scandal and political crisis are destabilizing the economy in the short-run, Brazil's response marks a turning point for the country. Brazilian institutions, not corrupt powerbrokers, are shaping the distribution of power. The people, through their elected officials, now need to decide what government they want to rebuild. This will in part depend on what Brazil means to them. How they re-define their country in these times of crises will dictate the politics that will shape their future. A new philosophy, fueled by public ethics, political empowerment, and personal enterprise, must be mobilized. One that seeks to eradicate inequality and promote self-reliance, knowing that along the way, everyone needs a helping hand. That hand is not black or white, rich or poor, but the national green, yellow and blue that has united Brazilians throughout their history. As Fernando Collor put it when casting his impeachment vote at the Brazilian Senate on Friday:

"There goes 127 years of crises and insurrections, of revolts and conflagrations, coups and revolutions. Having replaced the imperial aristocracy, we overcame the republican oligarchy...We confronted military and civil dictatorships. And, today, we are still in the process of re-democratization.