Gene patenting is in the news again. On April 15, 2013, the U.S. Supreme Court will hear oral arguments in a landmark case challenging Myriad Genetics' patents on the the "breast cancer genes." I'll be watching closely as things unfold. Perhaps you should be, as well. The ongoing debate on gene patents boils down to one simple question: Should anyone, in this case Myriad Genetics, be allowed to patent human genes? 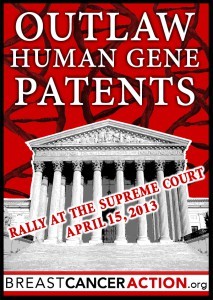 For me this case is personal. Breast cancer risk lurks in my family's DNA, so genetic testing was called for at the time of my breast cancer diagnosis in 2010. My entire treatment course depended on my test results. Knowing the results of my BRCA gene analysis test before making decisions about my course of treatment was crucial, perhaps even lifesaving for me.

I want every other person in a situation similar to mine to have affordable access to this life-altering information about their genes, to be able to get a second opinion if they want one and to get definitive test results so that they're not left hanging in limbo. When the resources are available, as they could be if not for Myriad's patents, anything less is just plain wrong. Equally importantly, women who do not have cancer yet but are deemed to be at high risk for developing breast or ovarian cancer based on results of BRCA testing (or would be so deemed if they had the opportunity to be tested) have preventative options that they may or may not choose to take in an attempt to avoid getting cancer. Lives are at stake here.

Back in 2009, a lawsuit was initiated by the American Civil Liberites Union and the Public Patent Foundation on behalf of 20 plaintiffs, challenging Myriad's right to patent the BRCA1 and BRCA2 genes. Breast Cancer Action is a plaintiff in this lawsuit, the only national breast cancer organization listed as such. (Where are all the others? I'd like to know.) In a nutshell, the suit claims that the patents inhibit scientific research as well as patients' rights to receive potentially lifesaving genetic testing.

Here is why Myriad's monopoly on the "breast cancer genes" is a bad idea:

Of course, Myriad strongly disagrees and continues to fight hard to hold on to its BRCA1 and BRCA2 gene patents. That's not surprising when one considers the amount of dollars in profits at stake.

It's true that roughly only 10 percent of breast cancer cases are attributed to the BRCA gene mutations. I realize that people like me are in a BRCA-positive cancer risk minority "club." However, science is only at the tip of the iceberg here. Genetic testing is still in its infancy. More and more genes are going to be linked to diseases, conditions and who knows how many ailments. In the future, more and more medical decisions and personalized courses of treatment will be based on genetic test results. We are entering the age of more personalized medicine, are we not?

Yet as Weill Cornell Medical College's Christopher E. Mason, who recently co-authored a study indicating the complexity here and showing that nearly the entire human genome might be covered by patents, said, "Just as we enter the era of personalized medicine, we are ironically living in the most restrictive age of genomics. You have to ask, how is it possible that my doctor cannot look at my DNA without being concerned about patent infringement?" That's why this case matters to us all.

It's really not all that complicated: Human genes never should have been and never should be patented. It's time for the U. S. Supreme Court to set things right. This landmark case directly affects my family today. Someday it might affect yours too.