Anyone not living under a rock should know that October is Breast Cancer Awareness Month, but what some do not know is that September was (and always is) Ovarian Cancer awareness Month. Call it serendipitous or weird coincidence that these two cancers have awareness months so close together, but I like to think it's the former. The two cancers are genetically related, after all. Yep... a woman's tah-tahs and vajay-jay, when plagued by one cancer, may very well have the other cancer knocking at the door. It seems being a woman can be a very risky business.

In light of this, I'd like to share a very different "awareness" message to those of you without breast or ovarian cancer: Both men AND women can have the genetic mutation, and in men, they can lead to other cancers. If someone in your immediate family or anyone you know has been diagnosed with either breast or ovarian cancer, I encourage you to pay attention to this post. The information I'm about to provide may surprise you and it could save you or a loved one's life. But let me rewind just a bit and tell you a little story.

My sister, Mary Louise (Mimi) Sherwood Larimore passed away in August of 2010. She battled ovarian cancer for almost seven years, and endured seven rounds of chemotherapy before succumbing. She was barely 52, and far too young and full of life to die.

I'll never forget a discussion I had with Mimi back in 2006 while I was living in Colorado and she was undergoing her third or fourth round of chemo. I asked why she didn't just "gut" everything out when she first learned of the cancer. She said she'd had a full hysterectomy right away, but the cancer had already re-seeded throughout her torso. I cried and remember telling my boyfriend back then how very shocking and sad this was. I reflected on how young my sister was (46) when diagnosed and said, "If I could gut out my parts right now, while I'm still healthy, I would do it. These things can be genetic and I wouldn't want to risk it." I'd already seen how the chemo was tearing my sister to shreds, and I didn't want any part of it. Who does? But the only way I knew my insurance would cover such a surgery was if I was diagnosed with the dreaded scourge.

In 2008, I moved back to Los Angeles, and as any responsible female does when moving from state to state, I found a new gynecologist. When my new doc learned of my sister's plight, she suggested I go in for genetic screening. I was immediately interested, but was unable to afford the hefty price tag for such a screening. We decided to monitor things traditionally and hope for the best.

The next two years were extremely difficult for various other reasons. Our family (I am one of eleven kids) lost our mother (our only living parent) to complications from a stroke. To add to that, the economic downturn had cost me most or all of my clients, I was unable to find work and I was losing my home.

In the midst of all this, in August of 2010, as I mentioned, my lovely sister lost her battle with ovarian cancer. It was devastating. We'd grown more close than ever in her last years and her death caused a deep pain I'd never known. She'd been an example of incredible strength, love, life and laughter to her husband and kids, and to my siblings and me for our entire lives. 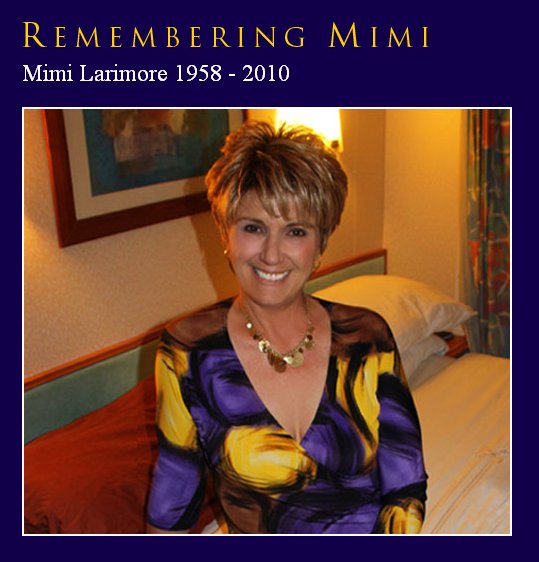 It's interesting how intense pain and hardship have a way of weaving through the fabric of our lives. But when one dark, heavy door seals itself shut, another creeks open, shedding a light on another possibility or path. Sometimes we make the smartest of decisions with those new possibilities, and other times our judgement is clouded by the finality of the door that is sealed shut.

In the span of two years I lost my mother and my sister, was faced with foreclosure on my home and was still unable to find gainful employment. I began to see some light (and relief) at the financial end of the tunnel, however, when I learned I would still be able to walk away with some cash if I sold my home at a loss. It was another difficult pill to swallow, and I felt somewhat like an onion whose skin was being peeled away, layer by layer. Still, nothing compared to the deep loss I felt by my sister's recent passing. With everything that had happened over the last few years, and the hardship everyone around me was facing, when I sold my home I felt somewhat like I'd won a small lottery. You'd think with my new "windfall" of cash, I would have run to the genetics lab post haste, but no.

My laundry list of things to do with this new money included such things as long overdue car repairs, computer and cell phone upgrades, a long weekend in Costa Rica, a birthday celebration for my boyfriend and so on. The fact that I'd not been financially able to see a doctor in months probably contributed, but genetic screening was the furthest thing from my mind. That is, until I went in to see the plastic surgeon.

Yes, believe it or not, the only thing I wanted to do for my body was to have my breasts reduced (uh-huh, reduced). I knew the doctor I wanted to work with and we set up the surgery. (A side note here, but relevant later: My doctor enthusiastically told me about her newly developed One-Stage Breast Reconstruction, a breast reconstruction that was done right alongside the mastectomy, mostly in Breast Cancer patients. She'd published an article in a medical journal about it and wanted to spread the word about this new method). The only thing left to do for my surgery was obtain medical clearance, which reminded me to get in for an annual exam with my gynecologist once again.

I went in to see my gynecologist and she immediately asked about my sister Mimi. When she learned she'd passed away without having the genetic screening, my doc turned up the heat on me. She really wanted me to be screened, so I finally succumbed. This time, I had no excuse. I knew I wanted to know, but this time around, because of the Affordable Care Act, I learned most insurance companies (mine included) now covered 90% of the screening. I also learned insurance companies are prohibited by law from discriminating based on genetic testing (there is information about it in the GINA act) and that genetic conditions cannot be defined as pre-existing conditions.

I'll cut to the chase here: I went in for the screening, and more to the shock of the genetics counselors at Cedars Sinai than to myself, I tested positive for the BRCA2 Genetic Mutation. The shock was because even with TEN FRIGGIN SIBLINGS, I had only one first-degree relative with ovarian cancer, and none with breast cancer (as of yet). None of us is absolutely certain whether our father's cancer, which was only discovered two days prior to his death and running rampant throughout his mid-section, was prostate or pancreatic cancer -- or not -- (also high-risk cancers for BRCA2 mutation carriers). Our mother did not have it. There was a second degree relative with ovarian tumors at a young age, but that was about it.

So yes, the genetics experts at Cedars were quite surprised. They explained everything to me about the BRCA2 mutation as such:

Genes are read in three "letter" sequences. But every three letters must "make sense" or "spell" something... so a correct set of code may look like this:

But when a mutation occurs, an extra "letter" like an "A" is inserted, which sets all the code off and causes all kinds of mayhem in your body. It may look like this:

So, why only these cancers (ovarian, breast and lesser known pancreatic and prostate) then? Why wouldn't this screw up our entire bodies? Why wouldn't there be a risk of brain tumors or whatever?

Because it's like a library. The brain tissue or liver tissue, etc., never has to access this code. This code is only accessed by breast and ovarian tissue most of the time, and the prostate and pancreas some times. So that's why you don't get bone cancer or a brain tumor, etc...

Additionally they provided these nice little statistics of RISKS* for me to think about (and share with any and all blood relatives): 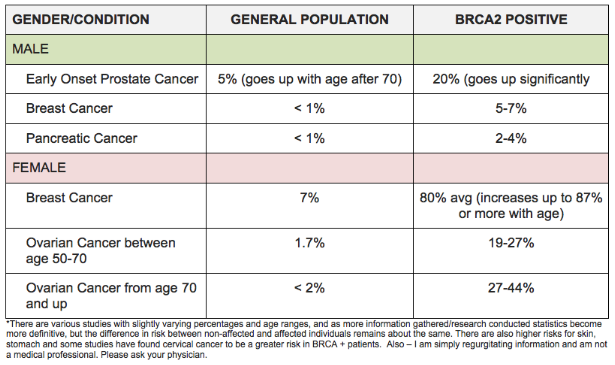 In my results appointment, my genetics counselors discussed the options available to me. There were a few choices but I opted for the most aggressive approach to eradicating my elevated risks. For me it was simple. I saw what my sister and her loved ones went through. I have two kids and did not desire to have more and hell, I was planning to reduce my breasts anyway. So, I made the decision to undergo a double prophylactic mastectomy (with breast reconstruction and implants) and remove my ovaries and tubes.

How serendipitous is it that the very doctor I'd consulted with for my breast reduction was on the forefront of one of the most advanced post-mastectomy breast reconstruction techniques!?

And there is a lesson in all of this for you: If a loved-one has suffered from breast or ovarian cancers, GET SCREENED, if at all possible. Tell your friends with this medical history as well.

Circling back to those decisions we make (sometimes smart, sometimes clouded) when one door closes and another creeks open... I don't regret a single thing. I am grateful to the doctors with whom I entrusted my life and health, as well as to my family and loved ones who've been a source of strength throughout my journey.

We are all exceptionally priceless... so in this respect, we are definitely "way too sexy for our genes." Let's not be taken down by any kind of cancer, especially if we can do something proactive about it! Early detection is key, and there is nothing earlier than before cancer is present! Please don't ever think you are too healthy or too anything to NOT be screened. If you have relatives who've suffered from breast or ovarian cancer (even pancreatic or prostate cancers), then ask about it and don't allow the fear of the unknown to jeopardize your health.

--------------
For more information about the BRCA 1 and BRCA2 genetic mutations, you can go to: FORCE (Facing Our Risk of Cancer, Empowered) at http://www.facingourrisk.org/index.php.

If you feel inclined, you can tweet the below (copy and paste into twitter) to encourage others as well - especially in October for Breast Cancer Awareness Month:

If a relative has suffered Ovarian or Breast Cancer, get the genetic screening. It could save your life. #BRCA #BreastCancerAwareness #Boobs