This is the second of two posts on the media's role in the national conversation about global climate change and clean energy. The first post can be found here. 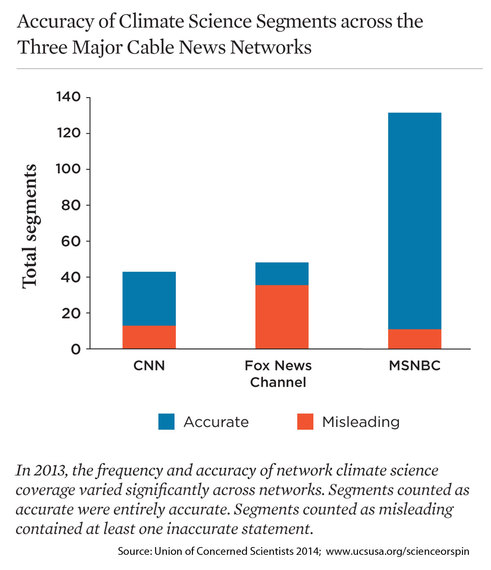 One of the age-old issues in the journalism profession has been how to keep news separate from opinion. At one time, journalistic ethics required that the twain should never meet. Today, the lines are blurred. It is one of the reasons for our political polarization.

Point 1: It is not uncommon for media outlets to add ideological bias to the information they provide to the American people. In other words, the twain that should never meet now do.

Point 2: One of the requirements for a healthy democracy, if you believe Thomas Jefferson, is a well-informed citizenry exposed to a diversity of information and views. But today, many media consumers "insulate themselves in 'echo chambers' where they are exposed only to content consistent with their opinions while shielded from dissenting views." In other words, a significant number of us do not want to be informed; we want validation of our preexisting views.

Point 3: Bias turns information into propaganda while the lack of exposure to diverse information turns opinions into dogma. That increases the number of Americans on the extreme ends of the political spectrum.

Point 4: The echo chamber appears to influence people on the Right more than people on the Left or in the middle. The Pew Research Center on Journalism & Media has found that people with "consistently conservative political values are oriented around a single outlet - Fox News - to a much greater degree than any other ideological group." And although people also get news and information from friends, social situations and social media, conservatives are more likely than other Americans to hang out with people whose views are similar to their own.

Point 5: People on Far Right and Far Left tend to be more politically active than people in the middle, voting more often and getting more involved in campaigns. As a result, although voters on the extremes of the political spectrum make up only about 20% of the U.S. population, they have an outsized influence on the public conversation about controversial issues, on the outcome of elections, and on creating and sustaining hardline partisanship in Congress. Investigators at the University of Illinois concluded nearly a decade ago that "The fundamental reason for the inefficiency in electoral outcomes is that voters choose to listen to biased media".

Point 6: On the other side of the echo transaction, bias has become a successful business model for media that purposely shape their content to appeal to ideological audiences. The Illinois investigators noted that, "Profits of media firms depend on their audience ratings, and maximizing profits may involve catering to a partisan audience by suppressing information that the partisan audience does not like hearing..."

Point 7: Some voters are not only poorly informed, they also are misinformed by inaccurate media content. Audiences may sense this. In its 2014 report on the state of America's media, Pew found that when it comes to news about government and politics, a majority of respondents trusted only three of 36 broadcast, print and Internet sources the pollsters listed.

Another study, this one at Fairleigh Dickinson University in 2012, found that people who watched Fox News, CNN and CNBC were less knowledgeable than the audiences of National Public Radio or Sunday morning talk shows. In fact, Fox News viewers scored "significantly worse than if they had reported watching no media at all".

Point 8: At one time, the Federal Communications Commission (FCC) enforced a Fairness Doctrine. Beginning in 1949, it required companies that held public broadcast licenses to present "honest, equitable and balanced" views on both sides of controversial issues of public importance.

The FCC stopped enforcing the doctrine in 1987 and eliminated it completely in 2011. There were questions about whether the Doctrine conflicted with the First Amendment. In addition, requiring broadcasters to present a balance of views seemed obsolete because today's audiences can create their own balance by surfing through hundreds of cable, network and Internet sources to obtain all sides of an issue.

In 2013 and 2014, House Republicans went on the warpath when one of the FCC's commissioners alleged that his colleagues were trying to revive the Doctrine or something like it. Republican members of the House Energy and Commerce Committee wrote to the FCC expressing "shock" that commissioners were trying to become "news police" by going "back in the business of attempting to control the political speech of journalists".

Point 9: As I said, the evidence today suggests that surfing for a balance of information and opinion is not what many of us do. And not to split hairs, but there was a time when journalistic ethics required that journalists not engage in political speech. When they did, journalists became editorialists and their credibility was shot as objective sources of information. Keeping the twain apart was and should still be not a First Amendment issue, but a professional standards issue.

Point 10: Nevertheless, it makes little sense to reinstate the Fairness Doctrine or another government mandate like it. It is impossible to mandate intellectual curiosity and openness to new ideas. Even if it were good policy to require media to offer balance, a mandate can lead the people to information but it can't make them think. The alternative, as the University of Illinois researchers put it, is to "foster a culture in which citizens appreciate learning about both sides of a political debate".

Point 11: In view of Points 1-10, opinion leaders in America should promote two fundamental ideas. First, it is an obligation of good citizenship to be well informed on matters of public importance. That includes taking the trouble to listen to all sides of issues. It should be clear by now that dogma and democracy do not mix well. Second, it should be the obligation of media to require again that journalism and opinion remain separate and that the latter not be disguised as the former.

Finally, if I were asked whether the media or media consumers are most able to break down the echo chambers, I would choose consumers. If we did not buy what biased media are selling, the media would most likely not peddle it. In that ideal world, we would stop listening to echoes and start listening to each other.