"If it bleeds, it leads"... ever hear that maxim of journalism? If you want readers, go with the scary, gruesome story -- that's what gets hearts pumping and grabs attention. Yeah, but what grabs our attention can also scare the heck out of us and shut us down.

Scary news might "sell," but we can also feel so bombarded with the negative that our "why-bother" reflex kicks in. Fear stimuli go straight to the brain's amygdala, Harvard Medical School's Srinivasan Pillay explains. But, he adds "because hope seems to travel in the same dungeons [parts of the brain] as fear, it might be a good soldier to employ if we want to meet fear."

So let's get better at using hope. It's a free energy source. 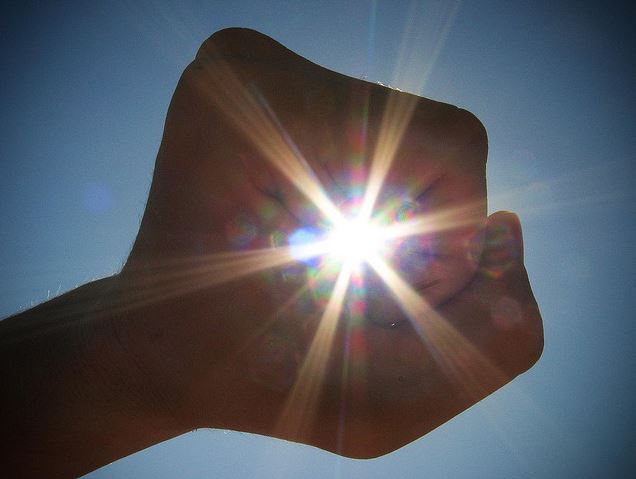 Hope isn't blind optimism. It's a sense of possibility -- delight in the new and joy in creativity that characterizes our species. So, let's break the good-news ban and become storytellers about real breakthroughs. (Below, don't miss our top ten go-to's.) I'm convinced that, in the process, we strengthen -- as we must -- our capacity to incorporate and act on the bad news as well.

After all, it's only in changing the small stories that we change the big, dangerous story -- the myth of our own powerlessness. Remember, what we do and say doesn't just influence our friends, but also our friends' friends and our friends' friends' friends. Yes, three layers out, research shows.
That's power! Besides, it's a great way to start the day. Here are some recent items that have "made my day."

Renewables ramping up. With news of Keystone and tar sands and coal-crazy China, it's easy to think that renewable energy is going nowhere, but we'd be so wrong. Between 2008 and 2012, the U.S. nearly doubled its renewables capacity. And in the first three months of this year, 82 percent of newly installed domestic electricity-generating capacity was renewable. Plus, installed capacity of new solar units during the first quarter of this year is more than double that of same period last year.

Globally, thirteen countries now get 30 percent or more of their electricity from renewable sources. And Germany -- with cloud cover worse than Alaska's -- gets 21 percent of its electricity from renewables. In 2010, Germany -- slightly smaller in size than Montana -- produced about half the world's solar energy. That could depress you, or, it could remind us of the vastness of untapped potential. In April, at the first Pathways to 100% Renewables conference in San Francisco, I heard scientists declare that there's absolutely no technical obstacle to our planet's reaching 100 percent renewable energy in a few decades.

Abetting the process, the cost of renewables is plummeting worldwide -- that of electricity from large solar power plants fell by more than half, from $0.31 per kilowatt-hour in 2009 to $0.14 in 2012.

Growing up in oil-centric Texas, I would have been the last person to predict my home state's leadership. But in the 1990s eight utility companies brought groups of citizens together to learn and to think through options. By the end of the process, they'd ranked efficiency higher than when they began, and the share of those willing to pay for renewables and conservation increased by more than 60 percent. Apparently, the utility companies listened: If Texas were a country, it would now be the world's sixth ranking wind energy producer.

And whole countries? Iceland already gets 100 percent of its electricity from renewables -- three-quarters from large hydro and 25 percent from geothermal. In Costa Rica, it's about 95 percent -- mainly from hydroelectric (which it's working to diversify), along with wind, biomass, and geothermal. Costa Rica's sights are set on becoming the world's first carbon-neutral country in time for its 2021 bicentennial. Absorbing more carbon will speed it along, so Costa Rica's forestry-financing agency is working with landowners to plant 7 million trees on cattle and coffee farms in the next few years.

Citizens clobber coal. Just since 2005, as part of Sierra Club's Beyond Coal Campaign, citizens across the country have stopped more than 165 coal plants from opening and successfully pushed for the retirement of more than 100 existing ones. The campaign aims to retire one third of America's remaining 500 coal plants by 2020. And if you're not registering how important this is, consider that coal accounts for more than a third of U.S. greenhouse gas emissions.

Forests forever. In India, ten million families take part in roughly 100,000 "forest-management groups" responsible for protecting nearby woodlands. Motivation is high, especially for women, because firewood still provides three-fourths of the energy used in cooking. Working collaboratively with the Indian government, these groups cover a fifth of India's forests; and they're likely a reason that India is the few countries in the world to enjoy an increase in forest cover since 2005.

And if you are not excited yet? Try just two final tales:

Close to home: Four years ago in Magnolia Springs, Ala., the conservative town government passed the toughest land regulation in the south. It's spending a quarter million dollars on a comprehensive plan to restore and protect its charming river from agricultural chemical runoff. "I'm a tree hugging, liberal -- I mean a tree-hugging conservative Republican! Which I know some people may say is an oxymoron," said Mayor Charlie Houser of this small town near Mobile. Brown pelicans are showing up again, says Houser, and he adds: "Cormorants up in the treetops... Beautiful site!"

Around the world: Three-fourths of Niger is desert, and news headlines focus on hunger there. But over two decades, poor farmers in the country's south have "regreened" 12.5 million desolate acres. In all, Niger farmers have nurtured the growth of some 200 million trees -- discovering that trees and crops are not competitors but are complementary. The trees protect the soil, bringing big crop-yield increases, and they provide fruit, nutritious leaves, fodder, and firewood. Now young people are returning to villages in Niger, and school kids are learning to care for the trees, too.

Are you willing to step up as a solutions-news ban breaker?

Neuroscientists tell us our brains are "plastic," with new neuronal connections being created all the time, forming new "streambeds" in our brains that shape our responses to life. So, isn't actively choosing what shapes our brains perhaps the most powerful ways to change ourselves, enabling us to change the world?

Facing unprecedented challenges, we can choose to remain open to possibility and creativity -- not mired in despair. Surely, the latter is a luxury that none can afford. We can create and enthusiastically share a solutions story today, every day. It is a Revolutionary Act.

Adapted from EcoMind: Changing the Way We Think, to Create the World We Want -- filled with solutions stories for your retelling.

Ten allies to help you "break the ban"--