"It's not raqs" said Nasir, captain of a mostly boys' breakdance crew in Kabul, Afghanistan, as he raises his arms and wiggles his shoulders in a caricature of the rhythmic, upper-body dominated dance characteristic of Afghan weddings. "It's dance."

Though "raqs" actually means "dancing" in both Dari and Pashto, the languages of Afghanistan, Nasir and crew shy away from the word. Social dance and music are still touched by conservative taboo here. But, even more importantly, their insistence on the use of the word "dance" appears a matter of accuracy. "What they call 'raqs,' that's not what we do," he says. This attitude (with a capital A) is in tune with street dancers everywhere. Hip-hop, urban dance, street dance, breaking, finger-tutting, popping, animation (1) -- as the growing delineations and the confusing YouTube rabbit hole I just emerged from show, street dance (not raqs!) is born and reborn out of a search for unique, often socially unconventional, ways to express oneself. For street dancers, there is always another way to manipulate the body, always a dynamic in the music no other dancer has exploited, no observer has seen.

But to set the stage for unique expression, basics must be learned. I am not the only one caught in YouTube contemplation, practicing two-step variations, the robot, and the slide-and-glide. Nasir and crew scrutinize the web daily, painstakingly downloading videos, struggling with Afghanistan's snail-pace bandwidth, to find models and ideas to copy for their hours of practice. As their basic skills grow, they add their own flavor, cementing their 'not-raqs' identity. Though Afghanistan's classic dances may never find a place in their repertoire, other local areas of expertise, like Taekwondo, strength exercises, and gymnastics do make their mark. 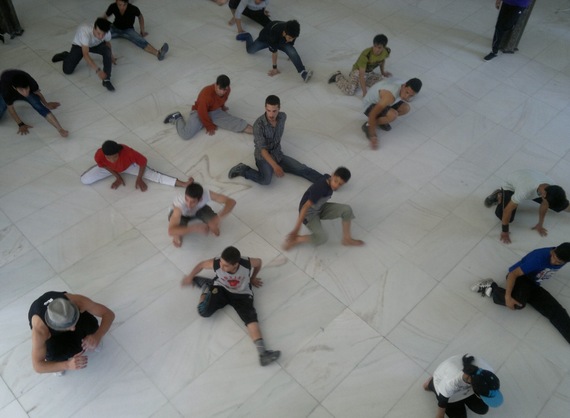 Recently, the crew brought in Morteza, a local gymnast, to train them and to up the ante at performances. Morteza was a crowd favourite last Thursday as he tumbled across the stage, matching the pace of Fares Baliouz and Gael Bafina from the visiting French group, Pockemon. The two crews, Kabul Dreams and Pockemon, took the stage together at the end of this breathtaking show, battling it out to see who could get the most applause, uniting with a demonstration of moves practiced together the week before.

In the midst of elections chaos, as allegations of fraud, ensuing demonstrations, and occasional disturbing silences rock through Kabul, these under-18s seem to have better things to do. The show was sold out. The audience had a surprisingly strong female presence, although it was still about 80 percent male, mostly youngsters who were sitting in the aisles, standing, getting a view where they could, some with smartphones and iPads filming every moment.

Near the end of the show, the lone female of the Kabul Dreams crew took the stage. She began to prep, moving with light hops, low to the ground, side to side. A bandana covered her face and hair. The audience response was overwhelming. You could see her clocking their reaction, which, after all, proved too intense for her. With a disparaging look at the audience, she flicked them off with a wave of the hand, turned on her heel, and faded back into the larger group on stage. We didn't see her spin on her head and grab her feet, lock it and pop it, but four hops were enough to make her mark. Attitude.

The Institut Français d'Afghanistan is known for showcasing local and international music, theatre, and other cultural acts. Importing a dance group was a first. Director Laurence Levasseur admitted some trepidation when making her decision, and relief that, in the end, there was no organized opposition to the performance. Street dance was a very good choice; male-dominated, and easy to pass off as a sport and a healthy pastime. The French crew themselves -- incidentally, almost all Muslim, like their Afghan peers - were elated after the performance. Though they had spent the last month and a half on an Asian tour, Hadis Sour, an eerily double-jointed and talented popper, admitted that, "we never thought we'd find ourselves in Afghanistan." When asked about the quality of the Kabul students, he paid one of the highest compliments you can give in the street dance world: "they're hungry." In dance, as in sport, where results are doggedly self-cultivated, the prize often goes to the hungriest.

The French crew received a deserved standing ovation from the audience. Their individual dance skills were undeniable, ranging from audience favourite Nagueye Mahmoud's eons-long, physics-defying head spins, to lanky Patrick M'bala's funky footwork and facial expressions, Junior Bordeau's ruthless power moves and Moncef Zeberi's humbling flexibility, to my personal favourite, Mehdi Meziane, of the rhythm, flavour, and for lack of a better word -- stomp. The individual artistry riveted, but the entertainment really was in the ensemble. The show was an hour long, creative, story-telling affair that blended forms and facilities, a result of choreographers Riad Fghani and Hadis Sour's collaboration with the dancers themselves, production by Arnaud Carlet (lights and sets), Nadine Chabannier (costumes), Douniel Fghani (technician) and Alexis Roure (music). 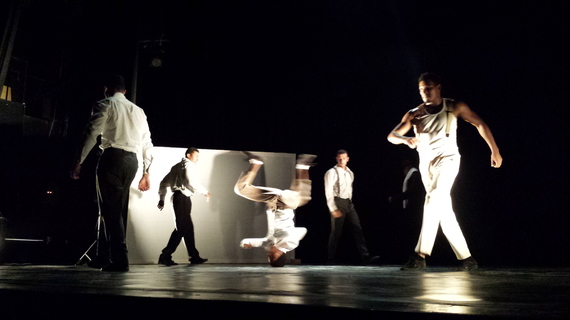 Highlights included a contemporary sequence moving in sharp, slow contrast to the rest of the fast-motion show, the use of a projector screen and spotlight to create stark and humorous shadow forms, an Afghan Pandora's chest spouting music when opened by a befuddled janitor, and an ever-present 1930s theme, with the swinging Charleston and proper trousers adding a touch of satirical class to the evening. The music -- from jazz to swing to hip hop to funk -- felt instinctive, intensified by clever moments of silence.

Let the Kabul dancers take note -- there may be a place for the old within the new, ways to blend the moves of our forebears and music of "conventional" genres without sacrificing self-expression and authenticity. Just as the French boys mixed jazz with hip-hop, and the Charleston with break dancing, here's hoping the attan and the wiggly wedding raqs find a place on the street and on the stage, amidst tutting, animation, power moving, and the rest of the urban menu of motion.

After an hour-long performance, teachers unite with students in a showcase of skills and practice.

(1) "Street dance" refers to a range of styles of dance developed outside of formal dance studios, as opposed to ballet, jazz, ballroom, etc. It is often used interchangeably with "hip-hop" though many hip-hop enthusiasts defend hip-hop as a more specific form and culture developed in 1970s New York. Dance genres within these categories are numerous. Those mentioned in this article include breaking: an acrobatic, strength-driven technique, popping: isolating and contracting/relaxing body muscles to perpetuate 'pops' in the dance, tutting: making geometric, angular shapes with isolated body parts, power moves: relying on momentum and spin within breaking for climax moves and animation: making oneself appear animated frame by frame, by stop-and-go locking motion, like a slow motion film reel.