Life Cycle is a series of posts on the extraordinary lives of ordinary things.

Seven minutes: The amount of time it takes for me to boil water, grind beans, push the French press, pour the milk and dump an embarrassingly large spoon of sugar into my coffee cup.
Ten minutes: The duration of my occasional morning coffee-by-the-koi-pond-with-one-American-Spirit-light meditation. 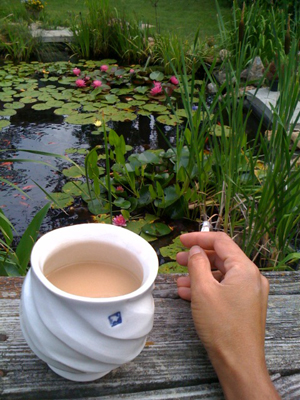 Thirteen months: The time it took to grow the coffee cherries, pick them, pulp them, roast them and package them to be shipped to my area. (To say nothing of the milk and sugar--that's for another day.)

Our morning pick-me-up likely started its journey in a Brazilian or Columbian rainforest. Or a place that used to be a rainforest, before it was leveled to make way for a coffee plantation. There, a farmer earning about $300 a year planted, tended and harvested the coffee cherries (what we call "beans") amid petroleum-laced fertilizers (that not only fed our oil addiction but contaminated his water sources with dangerous nitrates) and insecticides (that actually hurt him more than us, as most poisons are removed during processing). The unused plant pulp was dumped into rivers, clogging waterways that were already compromised by chemicals.

Our pick-me-up can be a bit of a downer, really.

Going beyond fertilizer and bug-killer to boost production, growers have moved toward planting in the sun rather than traditional shade-cover methods--at great cost to the soil, which erodes and bakes beneath the equator sun. But this is a seemingly easy way to keep up with outrageous demand.

Next to crude oil, coffee may be our strongest addiction. More than half of Americans fuel themselves with one to four cups of coffee, totaling upwards of 330 million cups daily. It's not surprising that coffee is the second most traded commodity in the world--caffeine is one of the fastest, most effective drugs on the market, soaking into our brains to block adenosine, the chemical that tells us to sleep.

Coffee is becoming the chosen picker-upper among wealthier classes in places like China and India, and there's no dearth of coffee-infused drinks in the West - from MooLattes to Coffee Slurpees.

Annual production of coffee cherries is expected to reach 7 million tons by 2010, yet the folks meeting that demand are facing debt and starvation. While we feel the pinch dishing out over $5 for a half-caf, skinny cappuccino with extra foam, commodity coffee prices have plummeted to less than 50 cents per pound. The coffee crisis is forcing even the world's biggest producer, Procter and Gamble (Millstone, Folgers), to take notice.

Let's run some more numbers, courtesy of the Center for a New American Dream: Drinking two cups of conventionally grown coffee each day for a year requires 12 trees, 11 pounds of fertilizers and a few ounces of pesticides, and results in 43 pounds of pulp being dumped into rivers. Add travel to this, and our beans are probably racking up more frequent flier miles than we are (if your coffee beans were grown in Sao Paulo and roasted in New Orleans, they've traveled 4,675 miles).

No, we're not giving up coffee. We are, however, attempting to find java that's fair-trade, shade-grown and organic (hint: no Starbucks brew wears this virtuous, triple-gemmed crown). It's the only sort of coffee that doesn't turn out to be a depressant.

Next installment: Our second favorite fix, the cigarette.

This post was written by Simran Sethi and Sarah Smarsh. Thanks to the University of Kansas School of Journalism and Lacey Johnston for research assistance.