As the self-proclaimed "Tea Party President," Pearce's national role as the figurehead for punitive immigration measures also turned the recall election into a referendum on the state's notorious SB 1070 "papers, please" immigration law, which Pearce had made the hallmark of his legislative career.

According to the Maricopa County Recorder Elections Department, Republican moderate and SB 1070 opponent Jerry Lewis overcame the Pearce campaign's series of dirty tricks and election war chest to win 53.4% to 45.3%. in a contest that divided the city's influential Mormon Church.

"This is a huge shift," said Randy Parraz, co-founder of the Citizens for a Better Arizona, which organized the recall drive in one of the most conservative districts in the state. "Russell Pearce is not only too extreme, but had remained untouched. This election shows that such extremist behavior will not be rewarded, and will be held accountable."

Considered the de facto governor of Arizona, the seemingly invincible and right-wing extremist Pearce became the first state Senate president in American history to be thrown out of office in a recall election. Led by an inspiring citizens movement, Pearce's downfall marks an extraordinary sea change in Arizona politics, especially in the areas of the changing electoral demographics and immigration reform policies. According to Parraz, the Citizens group registered more than 1,150 new voters in the district.

"Immigration issues are not Republican or Democratic," said Parraz, noting that the recall effort was successful largely because of its bipartisan support that also focused on education, health care and jobs. "To have effective and sustainable change, we have to work together." 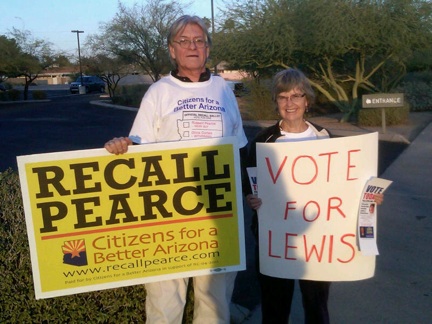 Defying all expectations, the unprecedented bipartisan organizing effort led by the Citizens for a Better Arizona galvanized the recall movement into a statewide effort to cast out Arizona's increasingly volatile and embarrassing extremist political leader. Only a year ago, Pearce's ascendancy to the Senate president post was hailed by many as a watershed moment for the Tea Party movement. Within days of his reign, Pearce and his Tea Party legislators introduced a flurry of radical bills, including an effort to "nullify" federal laws.

"This election sends a message to other Democratic efforts," said Dan O'Neal, with the Arizona chapter of the Progressive Democrats of America, "to not be afraid to take on issues and races in red states."

Considered the architect of the SB 1070 immigration law, Pearce had worked with the American Legislative Exchange Council lobby front to shape the latest version of the bill, which had spawned similar laws in Georgia, Alabama, South Carolina and other states.