"Breaking Bad" creator Vince Gilligan revealed several alternate endings that he and his writing staff considered and ultimately decided against for the series finale of the "Breaking Bad."

In an interview on the "Breaking Bad Insider Podcast," Gilligan provided a fascinating glimpse at the different ways Walter White's story almost ended. Gilligan stressed that part of the "Breaking Bad" team's creative process was to kick around every possible good, bad and mediocre idea, meaning that these are the half-fleshed out scenarios and story ideas that ended up on the cutting room floor. Gilligan repeatedly admitted that some of these ideas are pretty out there, but they're still really interesting to consider. 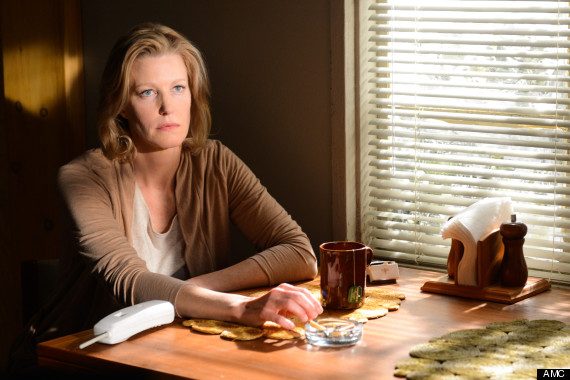 They almost had Skyler kill herself.
In a big final season pre-season "pitch-out call" with AMC and Sony executives, Gilligan pitched the the idea of Skyler killing herself. "We were leaning towards that, and the other writers were like, 'no, that's a bridge too far.' And they were right. I think that would have been just very unnecessary. I was thinking along those lines, that at some point she went with the disappearer ... and we talked about every option under the sun, every permutation, every possibility. And one of them was that Skyler leaves with Walt and the disappearer ... But we could never figure [it] out, we could kind of almost sorta see if Skyler would go, if she was zombified after Hank's demise, but we could never figure out how to get Junior to come along ... There's no bringing Junior if he doesn't want to go.

"We talked about a possible version where Skyler and Walt were holed up in some Motel 6 or someplace, and he's talking to her, she's in the bathroom and he's saying to her, 'It's going to be alright, it's gonna be okay, I've got a plan. Skyler? Skyler?' And he forces the door open and she's in a bloody tub or something like that, having opened up a wrist ... It was very dark." 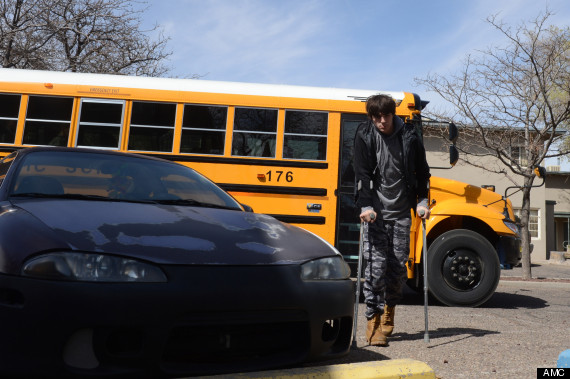 Walt Jr. was almost killed in Season 2.
Laying out a scenario where Jesse was killed in Season 1 by ruthless drug dealer character that we never ended up meeting, Gilligan described a scenario in which "Walt is so filled with rage [at] the drug dealer who kills Jesse that he's out for revenge. And he takes it very personally ... Walt gets this guy and chloroforms him or something, and installs him in some basement somewhere" to torture him, with a shotgun and trip wire to give the bad guy the option to kill himself, Gilligan described, before mentioning that this was before he had a writing staff and that everyone who heard this idea was thoroughly horrified. "Walter Jr. was gonna somehow stumble into this place ... and Walt Jr. being a sweet character, was going to try to help him ... and somehow this guy's eyes flicker open and somehow he realizes it's Walter's son, and then and only then does he trip the wire and kill both of them."

"Everyone I pitched that to told me that I was seriously f---ed up. And you'll notice that we never did that scene." 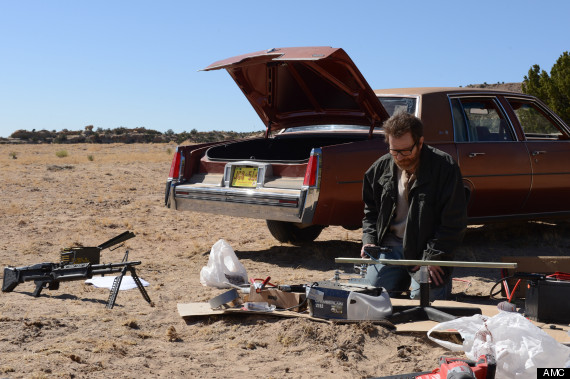 The Machine Gun.
Gilligan said they didn't know what they were going to do with the M60 machine gun they introduced in beginning of Season 5. The writers debated having Walter go out like Scarface, using it either against the cops or in a prison-break to free Jesse.

"You're planting your flag at that point ... You plant that gun, you show the gun to the audience in Act 1, you gotta fire it by Act 3 ... We were planting our flag, we were saying, you know what, an M60 machine gun, Rambo's machine gun, something cool has to happen with that. We'll figure it out later."

"Who does he use it on was the first obvious question. And at that point, we didn't have Uncle Jack yet ... we hadn't thought of him yet, and Kenny and Todd, we didn't have any of those guys ... We knew there'd be a bunch of bad guys.

"Our original version was that Walt would use it in somewhat Rambo fashion, handheld, mowing down a bunch of guys. But the closer we got to the end, and we realized Walt's cancer would resurface and we realized how sick he would be, that felt wrong to go brawns over brain, go out like Rambo. On his best day, Walt was never Rambo. So very late in the game we came up with mounting it in the trunk and using the garage door motor as a way of sweeping it back and forth, and automating the process. Because everyone, including me, loved those moments when Walt was MacGyver-esque."

At one point, Gilligan and his writers got to thinking that it might be too obvious to have Walt use the gun on a bunch of bad guys, and considered that he might shoot up a police station, or a jail, to set Jesse free.

"We had versions that we talked about, for instance, where the police are coming to get him and he uses it on the police, but we didn't like that, it that didn't seem right. We had a version where he goes and breaks Jesse out of jail just as the Nazis are going to knock Jesse off in jail, and he comes in and uses an M60 to lay waste to an entire prison or prison bus ... So we had every version of this. I'm not saying we got far with those, but we would talk them through for hours on end ... But we were like, You know what? As bad as Walt is, we don't want to see him killing good guys. If he's gonna use this M60, even if it's slightly less surprising, let's see him use it on guys that are worse than he is." 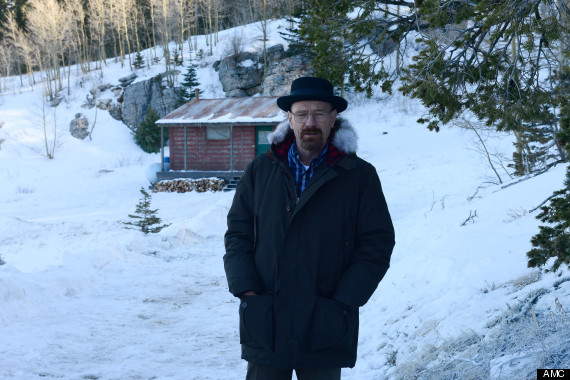 Walt's life in New Hampshire.
The writers also kicked around the idea of giving Walt more of a long-term second life in New Hampshire. "We talked about him having a new wife, a new job, we talked about him teaching at a learning annex place, teaching chemistry. We had a scene that we never got to ... where he made peanut brittle. And somehow, you can tell by the exactness with which he goes about cooking that he misses the cooking of the meth."

Are you happy with the way "Breaking Bad" ended? Would you have preferred any of these endings?