He watches the computer monitor over his son's shoulder as web-embedded images from his life scroll across the screen interluded with tributes typed over a jarring green background spattered with stars. He's a father, a husband, and a teacher, the headline announces; he's Walter White, and he's "in trouble. It's lung cancer."

As Walter White, Jr. (Junior), presents his website to his father, his mother, and his aunt, the immediate sense emoted is touching: Walt's face reveals his admiration, his adoration, and his deep-seeded pride in what his son is able to accomplish given the limits of the Cerebral Palsy that restrains him. But when his aunt whispers out the link to the site, "SaveWalterWhite.com," Walt's countenance quickly changes from honored humility to tentative panic: "Uh, wait a minute. You're not asking for money, are you, son?" he questions. "Ye-yeah, that's the whole idea" ("Phoenix"). 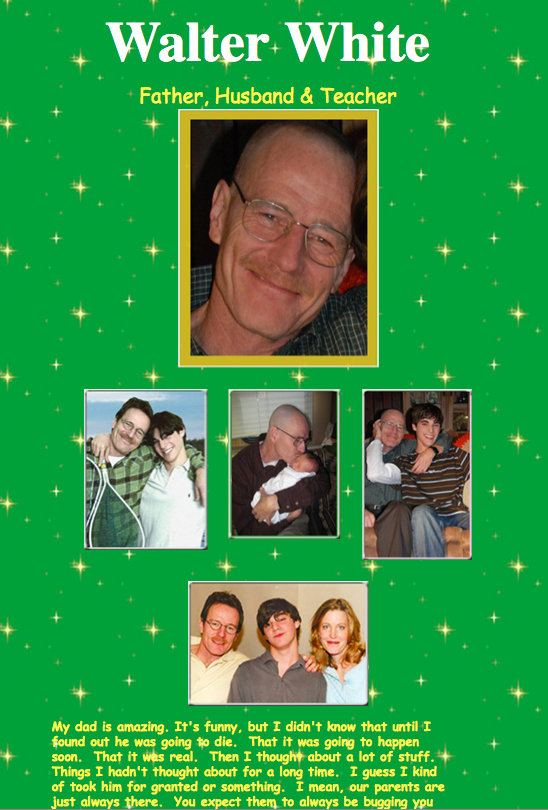 Although Walter White stumbles in and out of wealth at the hands of villains and crippling betrayals, he is driven by an ego that will not allow him to accept financial help from others, and his son's "little website" is no exception. "This was all his idea. He worked so hard on it; just let him help. You can't ask him to take it down," Skyler, Walt's wife says. "Skyler, it's charity," he answers, grimacing as if the thought sickens him. "Why do you say that like it's some sort of dirty word?"

Of course, the frequent utterances of the website address throughout the episode and others to follow piqued the interest of viewers, curious to see if such a site really existed and delighted to find that it did. The real website of the same address is an exact reproduction, including Walt's biography, his lessons, and what he means to Junior, all in the type face Comic Sans.

There is even a donate button at the bottom of the page, same as in the show, except instead of redirecting to a PayPal address to offer visitors a chance to give to Walter White himself, the page redirects to a donation page sponsoring the National Cancer Coalition (NCC), vastly smaller than the more well-known American Cancer Society but with better ratings.

After the episode's premiere, the website delivered more than a million unique visitors to the NCC's website, a huge surge for the medium-sized North Carolinian charity, and in the three years since the episode aired, continued clicks from the site have filled a donation pool of more than $125,000, about 5,000 of whom find or continue to visit the site every day.

NCC president and chief executive officer Robert Landry told me he was just as surprised to learn about the website as I was. "We (NCC) did not know [creator Vince Gilligan] had done this at the time. We are not connected to the show or AMC. Then, AMC developed the site and linked it to our site, which we happily discovered when we noticed the site traffic hugely spiked," Landry told me. "Can you imagine the efforts we would have had to go to and the expense to direct such a large number of people to our cause?" For the NCC, nothing more than a link on a fictional website delivered staggering results for the charity, becoming an example of a new, unintended breed of cause marketing that charity workers and media industry professionals are beginning to champion, Cause Placement.

"Our priority is to help social good initiatives and organizations connect with the games, music, movies, books, television and theatrical shows, and personalities. In many ways we are the Match.com for non-profits and entertainment content. The opportunities really are endless," says McCarty. 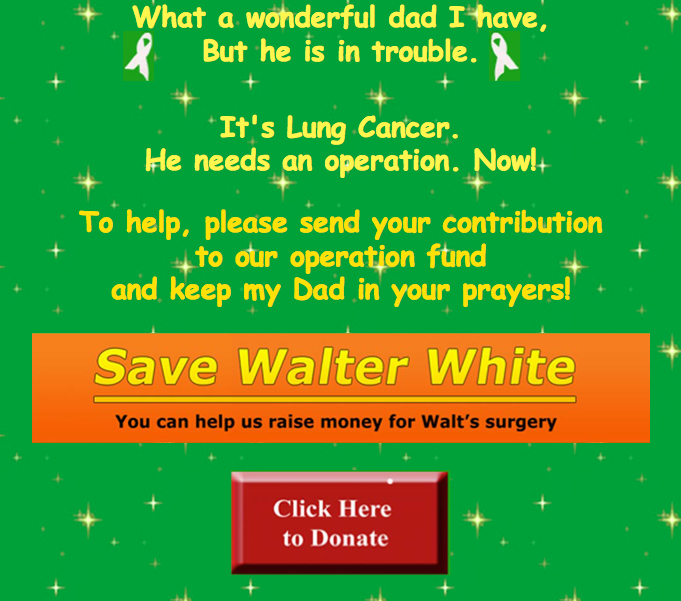 While continued technological advances make 3D aesthetics feel more and more like reality, "quality" audiences are beginning to demand a fourth dimension from their media choices: Are they doing good? In a culture of growing political and cultural sensitivity, Millennial audiences especially are questioning the greater cultural relevance and footprint of the ever-growing television, music, and film choices available to them.

Since media choices abound from network, cable, and now even online distributors, viewers are no longer constrained by a lack of products to choose from, and are becoming more loyal to options they think are not only entertaining, but doing good. The strategy of Cause Placement (think product placement) allows media producers to weave in their own activist and/or charitable goals without abrupt PSAs or overwhelming plot points that cloud their narrative goals.

The quality cause placement, then, works because it rewards fans who do the work to uncover it and share what they have revealed with others. Had Breaking Bad relied on a post-show statement by one of the actors supporting the NCC (as is often done in network dramas), the actual results may have been vastly different. The clever cause placement reached the right viewers, buoyed the right word-of-mouth strategy, and resulted in more than a million unique clicks to the site as well as more than $125,000 in donations. Most telling of all, people felt good about watching Bad precisely because they felt it was doing good work.

One viewer, for instance, was particularly moved discovering the placement: "I am crying savewalterwhite.com is an actual website and it has the pictures of walter jr's message and it's set up for donations and everything but if you click to donate it sends you to the national cancer coalition and you can actually donate for real people i'm serious there are tears streaming down my face." Another pointed to the show's use of the cause placement as a marker of its quality, "Holy shit! www.savewalterwhite.com ACTUALLY EXISTS?!?! This show keeps getting better and better!"

According to a joint study performed by Achieve and Johnson Grossnickle and Associates, 75 percent of Millenials made a financial gift to a nonprofit organization in 2011, some of which was "in response to an emotional reaction." The study also found that Millenials were loyal to nonprofits and when nonprofits built strong relationships with them, they were compelled to act as fundraisers; indeed, more than 70 percent reported raising money on behalf of nonprofits. Even though the majority of Millenial donations were gifts of $100 or less, reaching Millenials is perceived as an important strategy precisely because they are so well connected and likely to share information about responsible charities with their networks, as the fans above had done on Tumblr when they discovered the donate button on SaveWalterWhite.com.

Realizing that their work was a viable and rich area for doing good, McCarty and Lokkesmoe teamed up to create the first ever annual Cause Placement event last year in D.C. The interactive presentations carrying the subhead "Entertaining Good," brought together more than 200 foundation representatives, industry professionals, agents, managers, and publicists interested in the opportunities that new cause marketing strategies could open.

"[We started] thinking about how we could integrate causes into content in a way that was far more powerful and purposeful than just gala fundraisers or red carpets," Lokkesmoe explained. "We see it as a seamless, integrated approach that begins early on - at scripting, in the recording studio, in the green room, on set, in the draft. It cannot be a tactic to market content to an existing affinity audience; too many partnerships are 'window-dressing.' It has to ring true for the audience."