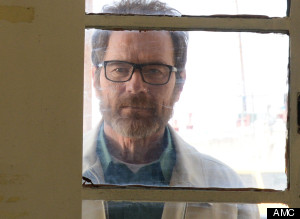 Don't read this unless you have seen "Felina," the series finale of AMC's "Breaking Bad."

From a structural standpoint, it's hard to be too hard on the "Breaking Bad" finale as a discrete unit. The last hour of the series took all the story threads that were still dangling and wrapped them up, not quite in an elegant bow -- more like a blood-drenched metal chain.

In the last few scenes, creator Vince Gilligan, who wrote and directed the finale, went with a Shakespearean solution, one of those "and then everybody died" situations that you find at the end of some of the Bard's plays. Out in the New Mexico desert, the bright, shining exception to the general bloodbath was Jesse, whose deliriously relieved exit from the Nazi compound was the best moment of the finale.

Yet in the future, I can't imagine many people will think of this as a classic hour of "Breaking Bad." Gilligan himself called "Ozymandias" the finest hour the show ever produced, and it's hard to argue with that assessment. It's fairly common for cable shows to kick out the jams in their penultimate episodes, but "Breaking Bad" went out in a slightly different way. "Ozymandias," the third-from-last installment, had an almost unbearable impact.

In many ways, that hour felt like the show's final destination; the story and the people went furthest they could go in a dozen ways. It placed many viewers (including myself) into an emotional and psychological vise and made "Game of Thrones'" Red Wedding look like a cocktail party. "Ozymandias" was hard to watch, but it was the culmination of almost every idea, theme and story the past five seasons had set in motion. It braided together everything that makes "Breaking Bad" phenomenal and was nearly toxic in its crystalline purity. It was majestic, cathartic, harrowing and great.

"Felina" was not that. The last two episodes, for all their good moments and sturdy attributes, feel like mopping-up exercises, to some extent. Perhaps the choices made at the start of Season 5 ultimately constricted and constrained what the last hours could do. I wasn't expecting another "Ozymandias," but a finale that was often concerned with logistical details and a plot to get rid of minor characters wasn't quite what I was expecting either.

"Felina" was not without excellent moments, and it goes without saying that the performances were top-notch. In the first third of the finale, there were some well-constructed twists and turns; the sequence at the Schwartz house was its own little effective thriller. In the middle, there was an elegiac spareness and a quiet grief in the final scenes of the White family. The reveal of Walt in Skyler's kitchen was a terrific -- and chilling -- moment, and Bryan Cranston and Anna Gunn played a full range of emotions from both characters -- especially Skyler -- with fantastic restraint and an ever-present tinge of sadness.

Still, there are some nagging areas of disquiet in the back of my brain, especially as the endgame played out.

For one thing, the finale spent a lot of time on the resolutions of characters (the Nazis, the Schwartzes, Lydia) I barely knew and I didn't care much about. More importantly, it did not spend much time on Walt and Jesse's final moments. Jesse's absence was especially pronounced in the finale, and that may partly account for why the last hour felt kind of lopsided and off. Without Jesse, and with so much attention paid to structural detail, "Felina" ended up coming off as a bit mechanical and remote. The final pieces that the puzzle that "Breaking Bad" has been assembling in Season 5 were slotted into place, but the kind of brain-melting impact of the show's best episodes wasn't present in this hour.

I will admit to wrestling with how much Walt got to control his own narrative (again), and that's what accounts for the fact that I didn't post this until 4 a.m. I'm betting I'll be wrestling with that for some time to come (Ryan McGee and I will publish a Talking TV podcast about the finale Monday evening, in which we'll discuss these matters once again. Update: The podcast on "Felina" is here and below).

Did the fact that Walt had finally stopped lying to himself and his wife, and the fact that he had one final reckoning with Jesse over the barrel of a gun, make it OK that he got to arrange his last hours to his own satisfaction, more or less? When Walt left this Earth, he was on generally civil -- if not friendly -- terms with Skyler and Jesse. Going from the events of "Ozymandias" to these resolutions is not necessarily illogical, but it is fairly swift, all things considered.

Given how much he's wanted to control events and other people, I thought the finale might find Walt struggling at times with forces that tried to overcome him. To not have the upper hand rankles Walt to no end, and he mostly got to have the upper hand here. Now, much of what he controlled and directed benefited others, and there was an evolution in his ability to be self-aware and honest. But I wrestle with the fact that Walt got to call the shots, for the most part.

The case for that scenario: It was Walt being Walt -- why would he change who he basically is at this late date? That makes sense, believe me. The case against Walt having the upper hand: It allows a man who's done many bad things to control key outcomes yet again, and it's perhaps not as dramatic if Walt encounters no real obstacles in his endgame. He ticks items off his list and that is basically that.

I think I can kind of buy the way things were left in the case of Skyler. Walt giving her the grave site of Hank and Gomez, providing her with a way to avoid prison and making that admission -- "I did it for me. I liked it." -- well, the first two things were the least he could do, and that last admission represents a shift in the thinking of Walter White. Thank goodness he didn't try to apologize again, and thank goodness he finally admitted the truth about what's made him tick all this time.

In the past, Walt's often portrayed himself as being driven primarily by a desire to help others, when the truth was, benefiting other people usually came lower on the priority list than helping himself. But not everything Walt did in his final hours was driven by a rampant ego hiding behind self-serving lies. Selfless impulses had drifted up the list (though the list of priorities, let's face it, is still a mixed bag).

Will those relatively peaceful resolutions with Skyler and Jesse allow some "Breaking Bad" fans to banish Walt's previous actions from their minds and present the man's moral ledger as balanced (or in the black)? Will some viewers walk away from the Albuquerque saga thinking that Walt's slate -- as a human being, a father, a friend, a relative and a partner -- has been wiped clean? I think so, and I know I shouldn't care about that, but I do.

Part of the problem with how "Granite State" and "Felina" fit in to the endgame may arise from the structure of Season 5 as a whole. The last bunch of "Breaking Bad" episodes have had to compress a lot of time and storytelling, and thus, for me, not everything in the finale landed with the impact I'd hoped for. If it did for you, I'm truly happy about that. But for me, "Breaking Bad" at its best has been a show that values sound construction and moral rigor equally. Walt was hypervigilant about keeping the lab spotless and productive, and "Breaking Bad" has been just as conscientious about both entertaining us and making us think. Something was missing from "Felina," and it wasn't soy milk or tableside guacamole.

Several of my concerns came together in the final moments between Jesse and Walt. They nodded at each other, as if all their scores had been settled by what just transpired. The last time these two people saw each other, Walt revealed Jesse's hiding spot to the Nazis and then told him how he'd let Jane die. There is some distance to cover between Walt's confession about Jane and those nods, and I'm not quite sure "Felina" quite had time to cover it. As it happened, we barely saw Jesse before "Felina's" bullet-strewn endgame played out.

Earlier today, I watched the first two episodes of "Breaking Bad," which reminded me that the rage and resentment that drove Walt for so long were present before he began cooking meth. There's the scene of him telling his car-wash boss, Bogdan, to "f*** off," and there's the moment in which he physically attacks boorish idiots in a clothing store who are mocking his son. In those moments, he became addicted to the feeling he got from acting on his anger. It became a drug, an addiction he couldn't shake. And those incidents at work and at the store happened before he even went on the ride-along with Hank.

Jesse was the catalyst that greatly enhanced and sped up the chemical reaction that had already begun in Mr. White. But he was also the tortured soul who gave us a vital prism through which we could view Walt's actions, his mixture of self-pity and regret, self-loathing and arrogance. Jesse's humanity was a key part of the "Breaking Bad" cooking process.

Why, then, did Jesse get around the same amount of screen time as Lydia, Todd or Jack? Don't get me wrong, I'm glad he got out of his Nazi hell and his exulting screams as he drove away were terrific. But he was missed in the end. Walt may have been the great brain behind "Breaking Bad," but Jesse was its heart.

As Jesse rode off into the night, the sirens Walt heard recalled the ones that wailed so long ago in the pilot. These sirens weren't going to pass him by, as the earlier ones did. Surrounded by metal and machines, a song -- Badfinger's "Baby Blue" -- played. The singer talked about a "special love" and a man who "got what I deserved."

"I am awake," Walt told Jesse in the "Breaking Bad" pilot. "I was alive," he told Skyler. Now he is neither.

Did Walt get what he wanted, or what he deserved? Are those the same thing? Perhaps the fact that we'll be talking about this for days to come is the point. When the show began, Walt was a man who was forgotten, passed by, passed over, mocked, disregarded. Everyone he knew paid a terrible price for his transformation. Chemistry wasn't just the process of change for him, it was a chain reaction he couldn't quite control. Was the last thing he wanted to touch cold metal? Probably not, but it was the only thing that was there for him.

The finale aside, in the bigger picture, "Breaking Bad" remains a phenomenal accomplishment. When it debuted five years ago, who knew that it would take us to so many dark, difficult, dangerous and fantastically entertaining places? We had no idea what the show would end up doing for us and to us.

But we got what we deserved.