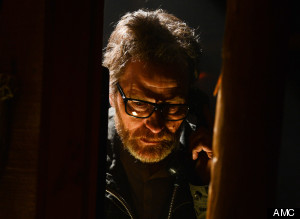 Note: Do not read if you have not yet seen Season 5, Episode 15 of AMC's "Breaking Bad," "Granite State." [Side note: "Breaking Bad" won the 2013 Emmy for Best Drama, as did Anna Gunn, who plays Skyler White. Well deserved awards on both fronts!]

"No matter how much you got, how do you turn your back on more?"
-Todd Alquist

Is it wrong that "Granite State" felt like something of a reprieve?

Only in context of the pummeling "Breaking Bad" has been dishing out of late, that is. Andrea being killed right in front of Jesse, whose suffering grows more mind-bendingly awful each week, was horrendous and hard to take, of course. But this episode, as a whole, wasn't quite the scorched-earth campaign "Ozymandias" was, thank goodness. Who among us was ready to be put through that nuclear-grade wringer again? Not me.

That said, "Ozymandias" certainly deserves a slot in the top tier of "Breaking Bad" episodes. "Granite State," though it was as well-made and well-executed as any late-era "Breaking Bad" hour, didn't quite have the drive and impact of "Ozymandias" or "To'hajiilee," which had epic scope, huge developments and more than their share of emotional sucker punches. "Granite State" had its moments, but it was mostly about lining up the pieces and getting us ready for the mayhem that will no doubt erupt next Sunday.

In terms of moments to remember, "Granite State" has the Other Phone Call, the sequel to last week's phone conversation between Walter and Skyler.

The phone-call scene in "Ozymandias" has been accurately described as a Rorschach test: To some degree, what you saw in that scene was what you brought to it. There were many things to find in that brilliantly constructed dialogue, which served, in a way, as an X-ray of Walt's own soul. His regret was real, but so were his control-freak tendencies: He was trying to hijack and retcon the narrative yet again. I wrote about that conversation in my weekly review, and there was so much post-"Ozymandias" fallout that I felt compelled to write a second piece about the episode and the reactions to it.

What will the post-episode consensus be on the Walt-Flynn phone call? I've no idea. But as far as I'm concerned, Flynn's scene in "Granite State" was the character's finest hour. All the stories Walter White has tried to tell himself and anyone who would listen about doing it "for his family" hit the granite wall of Flynn's absolute rejection of his father.

This was an episode full of stops and starts (Walt's attempt to bring Saul with him; his attempt to head to town the first time; his attempt to get Saul's Guy to stay, etc.), and his conversation with his son was full of sentences that he couldn't finish.

His attempt to explain himself to Flynn was a very Walt-ian mixture of admissions and half-truths that slid way too easily into the passive voice: "I did wrong. I made some terrible mistakes. But the reasons were always ... things happened. I never intended, I never intended...."

As for "The reasons were always..." What were they, Walt? Good? Right? Just? Walt can't finish that sentence -- the old song and dance about having done everything for his family -- because he knows how ridiculous it will sound to the son whose life he absolutely destroyed. Walt's Big Lie has crumbled in the face of Flynn's actual life.

Everyone who's watched this show has probably grappled with the question of how much sympathy we should have for Walter White and how much we should condemn him. Those questions are baked right into "Breaking Bad's" DNA. We've seen the story largely from his point of view, there's a wish-fulfillment quality to his ability to break the rules, and he's played by a consummately skilled and innately likable actor. The show has viewed him with some distance and hasn't ever tried to manipulate us into liking the guy -- "Breaking Bad" is actually more likely to expose his manipulative tendencies. But it's impossible not to see the world from where he sits a good portion of the time.

What about Flynn's point of view? What about Skyler's? Just because we haven't spent as much time looking at the story from their perspective doesn't mean we should dismiss their assessments. Aren't their opinions the ones that matter, given that all these things were allegedly done for them? One of the most powerful moments of "Ozymandias" was the shot in which we saw a towering, furious Walt from where they cowered on the floor, terrified. He looked like a vengeful god. Do you think, in that moment, they felt better off than they were before Walt began cooking meth?

"Granite State" contained another point-of-view shift, one that may have been designed, at least in part, to make us think about how we've been viewing this tale. The scene of Jack and his crew watching Jesse's recorded confession was uncomfortable to watch. We know how much telling the truth, especially about Gale and Drew Sharp, cost Jesse. Partly because they have don't have much context for Jesse's story, and mostly because they're unfeeling, amoral jerks, Jack and his crew didn't care about Jesse's pain. To them, the recording was just a piece of entertainment, one that may have some effect on their business operations. How dare they be so callous about what Jesse's been through?

Well, aren't some viewers of "Breaking Bad" callous about what Skyler and Flynn have been through? There's a great danger in viewing them as mere props in Walter White's journey; they're no less human and no more deserving of contempt than Jesse. What Skyler and Flynn think matters, and they hate Walt, not without reason. He left them with nothing but broken lives and hopes that are as thoroughly trashed as the White's house.

Walt did and does care about his family, but here's the big lie: They were never his top priority. Not really. They were a priority, but they were not the leading priority. Control and self-aggrandizement were always his top goals, and as "Granite State" came to a close, control and self-aggrandizement were still the things that came first. Walt's greatest crime is not just lying to everyone around him, but lying to himself, especially about that.

[Sidebar: One reason it's easy to care so much about Jesse, in spite of everything he's done, is that he's never lied to himself about who he is and what he's done. On the contrary -- he can never forget. Damn it, I desperately wanted him to break free of that cage, and it was just awful to see him watch Andrea die as punishment for his attempt to break out.]

In this hour, we saw a sad Walt, a lonely Walt, a trapped Walt, a sick Walt. We saw him prepared to pay $10,000 just to spend an hour with a stranger who might rob him blind when he's dead. It is truly sad that his epic narcissism prevents him from sustaining real, deep, human connections. Walt's not just one thing all the time: He contains multitudes. He does feel bad about what he's done -- how could he not? His isolation was affecting, but it's impossible to forget what got him there: That profound need to control, subjugate, dominate and browbeat others into falling into line and doing his bidding. The man loved his family, and still does, but were they ever more important to him than trying to be top dog? No.

Which is why this speech from Flynn was electrifying: "Just shut up. Just stop it. Stop it. I don't want anything from you. I don't give a sh*t. You killed Uncle Hank. You killed him! What you did -- just shut up. Just leave us alone, you asshole. Why are you still alive? Why won't you just die already? Just die."

A few things Flynn inherited from Uncle Hank: An unwillingness to compromise, a moral compass, a spine.

There was one thing Walt could do before he died: He could let the police come and get him. He could deflect some of the authorities' attention away from his family, for a while. That wouldn't make up for the shambles he'd made of their lives, but it would be better than nothing.

But "nothing" interfered, ironically. His former partners tried to erase him from the history of their company. They even tried to take his drug-kingpin accomplishments away from him. They tried to make him into a nothing, a zero, a non-entity, a man who no longer exists. Remember the tagline for the season: "Remember my name." How dare Elliott and Gretchen nullify both Walter White and Heisenberg? Making people remember his name was his actual life's work, regardless of what he told Saul or anyone else.

Once he'd seen Charlie Rose, Walt couldn't let the story end on someone else's terms. He wasn't going to go quietly in handcuffs. He'd go back to Albuquerque with the money in the box, buy a machine gun, take out Jack's crew himself and get his whole fortune back. That's seems to be the plan, and it's bound to go well.

"They took my life's work from me," Walt fumed early in "Granite State." If Walt truly loved his family, building solid and truthful relationships with them could have been his life's work. Actually putting their needs and their desires ahead of his could have been his life's work. Part of him knows Flynn isn't wrong: He has left his family high and dry. "It can't all be for nothing," he wheezed into the phone. The crushing truth -- maybe it was all for nothing -- began to dawn on him as he pondered that drink.

Dying of cancer, down to his last stash, as alone as a man can be, Walt ultimately chose not to stare into the abyss of what he created, but to take actions that will probably make things worse for everyone.

"No matter how much you got, how do you turn your back on more?" Sociopathic Todd summed up Walt's worldview perfectly. To Walt, there's always more out there. More to grasp, more to control, more to do.

But there's only one more hour left.