What better way to honor the science-loving anti-hero of "Breaking Bad" than a super-nerdy portrait made entirely out of Legos?

Andy Bauch, a Los Angeles-based software programmer by day, describes himself as an "artist/lego pusher" on his site HippoBricks.com and has been making lego wall art since 2010. In homage to Walter White's "Heisenberg" alter ego, Bauch put together a 2,000-piece Lego portrait in the style of Shepard Fairey's "Hope" posters for the Obama campaign.

He captured the construction of the "Breaking Bad"-inspired piece, titled "The One Who Knocks," in a time-lapse video that went live on the day of the series finale. Bauch explained to HuffPost that he made the piece in the week leading up to the finale because "the suspense over the final episode was killing me, and making a 2,000 lego mosaic is a pretty good way to blow off some steam."

The video (above) shows a cross-legged and shoeless Bauch putting together the "Breaking Bad"-inspired piece with the help of an assistant, a process that took about 10 hours. The show's theme music plays over the timelapse. 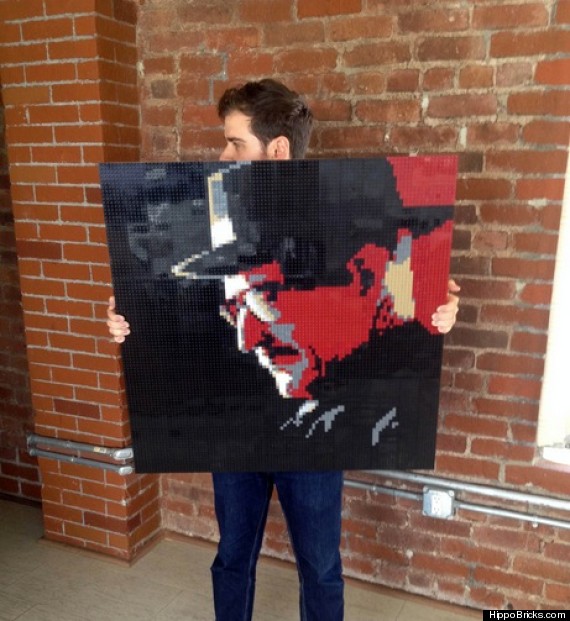 A photo of Bauch with the art, via HippoBricks.com.

Available for $1,400 (already discounted from $1,600!), the product page on hippobricks.com describes the piece:

This big, badass lego mosaic of Breaking Bad's pro/antagonist is handmade from about 2000 lego pieces. It is mounted on a 1" thick handcrafted wood frame.

Bauch also shared an album of the piece's construction on the photo site Imgur, embedded below.

UPDATE: This story was updated with a quote from Andy Bauch and more photos of the art piece.