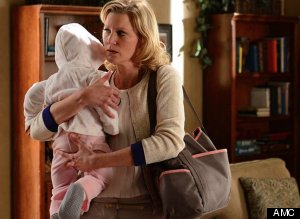 Note: Do not read if you have not yet seen Season 5, Episode 14 of AMC's "Breaking Bad," "Ozymandias."

Whatever can be said about tonight's "Breaking Bad," whatever words can be written, they won't do justice to this hour of television, which is without a doubt the hardest episode of TV I've ever watched.

After I watch an episode of "Breaking Bad," I try to watch it a second time before writing up my thoughts on it. I'll watch this hour again, but not tonight. I couldn't watch "Ozymandias" twice in one evening and still be able to form sentences. As it is, after watching the episode once, it took me a while to get out of the chair I was sitting in. A good long while.

"I met a traveller from an antique land
Who said: Two vast and trunkless legs of stone
Stand in the desert. Near them, on the sand,
Half sunk, a shattered visage lies, whose frown,
And wrinkled lip, and sneer of cold command,
Tell that its sculptor well those passions read
Which yet survive, stamped on these lifeless things,
The hand that mocked them and the heart that fed:
And on the pedestal these words appear:
'My name is Ozymandias, king of kings:
Look on my works, ye Mighty, and despair!'
Nothing beside remains. Round the decay
Of that colossal wreck, boundless and bare
The lone and level sands stretch far away."

Percy Bysshe Shelley could not have pictured Walter White in the desert in his tighty-whities; those pasty legs would not have inspired such elegant dread. But everything about the opening flashback -- the almost jocular sparring between Jesse and Walt, the lightness of the conversation between Walt and Skyler, the return to a time when all three parties weren't laboring with unbearable weight on their shoulders -- underlined the despair that was to come.

The word "despair" doesn't really do the events of "Ozymandias" justice. It will have to do for a start.

It didn't take long to find out that Gomez was dead. It didn't take long for Hank, poor Hank, to have his last stand, and prove that he had the kind of moral backbone that Walt can't even recognize anymore. I thought the most awful thing in this hour would be the sound of the gunshot that killed Hank, but I was wrong.

Adding to the weight of that scene: The way that Gomez and Hank were dumped into the pit that had held Walt's drug money. How wretched. On some level, I know that will not be either man's final resting place -- it just can't be -- but still, they'd spent their adult lives trying to fight the kind of greed and evil those barrels represented. For them to be dumped in a pit that used to hold those ill-gotten gains, and by the likes of Jack and his crew... To just be left behind in the "boundless... sands" was such an indignity. And Hank was a man to whom dignity and the right way of doing things mattered.

He wasn't just Hank. He was ASAC Schrader of the DEA and he was a good man. He deserved better.

So that was stomach-turning to witness, even as I could appreciate that the first third or so of "Ozymandias" was one of the most well-written, well-directed and seamlessly edited things I've ever seen. The whole episode was perfectly realized, actually. It's not possible to say enough good things about how Rian Johnson brought Moira Walley-Beckett's script to life, except to say that remember last week, when I wrote that watching the previous episode, "To'hajiilee," made me sick?

This hour made me feel ten times sicker.

My mind keeps returning to Anna Gunn's face in this episode. In the scene at the start, Skyler was just a normal person going about her day, selling ugly tchotchkes on eBay, asking her husband to pick up some pizzas for dinner, picking out a pretty name for her daughter.

Contrast all of that with the look on Skyler's face when Marie told her that it was all over and that Walt was in custody. I don't know how she did it, but Gunn communicated both horror and relief as Marie spoke. The look on Skyler's face said she was terrified to learn that the father of her children was going to prison for a long time, but some part of her also felt free, finally free of the monstrous evil in her house. The poor woman felt a weight had been lifted, in a way. If only that were true.

Watching Marie tell Skyler she'd be there for her sister as she went through this bad time was .... again, words fail. This is why television can be so effective, so amazing, so devastating. Marie, a character who started out as a side note, a diversion, comic relief, ultimately inspired such feelings of compassion and sadness. (A parallel trajectory that comes to mind: Buddy Garrity on "Friday Night Lights.")

If only Marie knew the truth. If only she knew about Hank -- and I didn't want her to know. It wasn't hard to figure out that Marie would learn the truth soon, and waiting for that moment was nauseating. "You have got to prepare yourself," Marie told Skyler, and it felt like a kick in the gut.

It got worse. Walt Jr.'s reaction was every bit as disbelieving and angry as you might expect. The hour was full of things that people were forced to do, just packed with awful compromises. Despite everything terrible that Walt had done up to that point, I didn't want him have to watch Hank die -- and then have to shake hands with Walt's callous murderer. I didn't want Skyler have to tell Walt Jr., but I can see how she didn't have a choice. To have your child lose all respect for you and your spouse in a matter of moments, my God, how can this situation get any worse?

Oh, it got worse. So much worse.

I couldn't watch "Ozymandias" again in large part because I could not watch the scene in the White's house a second time. Every one of us has limits, and one day I will watch the episode again, when I've sufficiently recovered from the first viewing.

The thing is, we're at the point in the story where all the chickens are coming home to roost. Every consequence of every single choice Walter White has made is landing with unbelievable force. Given how many terrible things he's done and the awful events he's set in motion, those consequences should land like a ton of bricks. I just didn't expect so much of it to land in such a concentrated way in one episode. It was pummeling, it was punishing, but I can't think of a thing I'd change.

I'll never be able to forget the moment that Skyler picked up the knife. Her fight with Walter. The baby crying in the background. Walt Jr's confusion and fury and the way he leaped to his mother's defense. It was all ... yeah. Accurate.

"We are a family." That "sneer of cold command" on Walt's face.

It got worse. It got so much worse. Walter kidnapped his own terrified daughter and the look on Skyler's face as she ran down the street after them.... Is it possible to ever forget that? I almost want to.

When Walter was on the phone with Skyler, that moment was almost harder to take than the fight in the house. If you've ever come across that kind of terrifying narcissism and purposefully cruel contempt, it's something that never leaves you. Bryan Cranston captured all that ugliness with unerring truthfulness. Walt accidentally engineering the death of Hank, watching Hank die, telling Jesse about Jane, Walt Jr. learning the truth, Skyler and Walter fighting and Walter stealing his kid -- I thought all that was as bad as it could get.

But in that phone call, Vince Gilligan and his writers were reminding us of who we'd been watching for five seasons. This was Walter White, as pure and concentrated as the meth he made. Here was Heisenberg unbound. Walt wanted to bring his family on the run with him because he needed to control them. He gets to have that. And when he couldn't control them, he used one of them -- the most vulnerable one -- to cover his own escape, to save himself. Everything, since Day 1, has been about control. How dare anyone else try to control him?

This is the ugliness at the heart of this story, the heart of darkness. Everything from here on out is just filling in the blanks (and I have no doubt that those blanks will be filled in skillfully in the next two episodes). But this is the terminus, the destination, the place we have been waiting to arrive at. This is the face of evil -- evil that masquerades as everything else under the sun, evil that brings on the kind of decay Shelley wrote about.

Walt's side of the conversation may well have been an act for the police. Walt's final communication with Skyler may have been, at least in part, his attempt to clear her of responsibility (and his way of of letting Marie know that Hank wasn't coming back). But there was something horrible clinical about Walt's rage. It was so pure, so fully formed -- so truthful, in so many ways that matter. That fury and rage and hatred had been waiting. The black hole inside him had been there all along. This was an aria from Heisenberg, who was telling everyone he'd ever had to deal with to "look on my works, ye Mighty, and despair!"

Holly was rescued. Thank God. Walter White is not a complete monster, nor did Gilligan want to torture us with her abduction for a week. (In a normal episode, the fact that the first words we've heard her say -- "Mama" -- would be a sucker punch to the gut. This was not a normal episode).

And now we have the basic outlines of what happened during the time jump: Walt got out of town, somehow was separated from his $11 million, and he armed himself and went back to Albuquerque to get at least some of his cash back from Jack.

I can't even think about Jesse chained up like an animal, cooking meth for Uncle Jack and his awful crew. What's worse for Jesse, having to deal with the matter-of-fact, bland pathology of Todd, or being alternately conned and cared for by Mr. White? I guess we know the answer to that now.

Many fans have long wondered how Jane's death would be addressed before the end of the show. I never expected Walt to tell Jesse himself, in the hopes of completely destroying whatever humanity was left in his former protege. Jesse's beat-up face as he looked at that photo of Andrea and Brock -- I didn't think things could get that much worse for Jesse. How wrong that assumption was. Among the scribbles in my notebook: POOR JESSE.

A long time ago, around the end of Season 3, I recall writing that the characters of "Breaking Bad" would never make me cry. I could not have been more wrong about that.