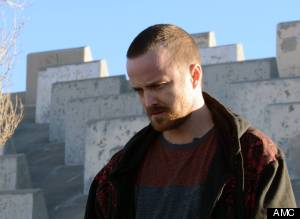 Note: Do not read on if you have not yet seen Season 5, Episode 11 of AMC's "Breaking Bad," titled "Confessions."

Writer/producer Javier Grillo-Marxuach (who was a recent guest on the Talking TV podcast) wrote a provocative piece earlier this week on the difference between "quality TV" -- a subcategory of drama that has arisen in the last few years -- and quality TV, i.e., TV that is actually good.

Without naming specific offenders (though I will -- hello, "Low Winter Sun"), Grillo-Marxuach noted that a raft of post-Golden Age programs have "learned the wrong lessons from shows commonly perceived as being 'quality shows.'"

As I understand it, Grillo-Marxuach wasn't saying that the techniques and strategies he listed in that piece were problematic in and of themselves. He was saying that people shouldn't use those strategies and techniques without understanding what effect they'll have. Don't grab the ingredients off the shelf, in other words, if you don't have a firm grasp on what flavors and textures they'll bring to the dish you're making.

And that, in a roundabout way, brings us to Trent, the server offering guacamole made "right here at the table!"

In a few short years, "Breaking Bad" has become one of the most influential shows on television, with very good reason. I have a feeling people are going to be imitating it for years to come, but I am afraid they'll do so without the level of intelligence and discipline demonstrated by the show's writers, actors, directors, production designers, cinematographers, costume designers, etc. Will the imitators' choices be as specific and thoughtful as the ones we've seen for the past five seasons, and will the results be anywhere as effective and entertaining as what we witnessed tonight?

I highly doubt it. True, one of the show's legacies is giving people something to aim for. However, trying to imitate "Breaking Bad's" goals, themes and execution would be learning the wrong lesson, in a sense. The hope is that creators will try to deliver this kind of cohesive vision -- while telling entirely different kinds of stories in ways that are best suited to that particular tale.

One of this show's signature moves is the creation of cognitive dissonance, and the scene in the Mexican restaurant was a beautiful example of that. We knew how tense everyone at the table was, thanks to their stiff body language and grim expressions, and the perkiness of Trent the waiter highlighted how non-festive everyone was feeling. There was the lively music, the colorful decor, Trent's fake-cheerful presence ... and then there was the hatred, disappointment, hurt and anger that the four people around the table felt. The impact of the latter was enhanced by the presence of the former.

Because "Breaking Bad" has delineated the surfaces and the depths of this world so precisely, we can inhabit the space between them and fill it with our own thoughts, reactions and speculation. We can derive an enormous amount of pleasure from the suspense and tension these spaces create; the contrasts make the show crackle with possibility and vibrate with energy. We can laugh in the middle of a scene of untrammeled violence (Saul's "Code red!"). We can feel a certain amount of sympathy for a man we know is a monster. Our hearts can break for a murderer. The show contains multitudes, and one of the reasons we respond to it is because we do, too.

In his overall Season 6 review of "Mad Men," Matt Zoller Seitz wrote that "in a good story, there's more going on than who goes where and does what to whom -- and ... in the really good stories, you can feel that 'more' roiling beneath every moment of the tale, even though you can't specifically identify what's causing it."

By this point, there's so damn much "more" in every frame of "Breaking Bad." And what makes the show a leader and not a follower is the fact that the show's creative team doesn't do these things in order to prove they can. They employ these strategies at particular times and in particular ways because they make the story Vince Gilligan and company are telling more effective. All along, "Breaking Bad" has been telling a story about the awfulness that can lurk inside boring places and seemingly banal people. We may feel a cathartic thrill when the middle-aged man in khakis transgresses, but the ambiguity that the show has been able to pack into that space between the surface and the depths means we've never been coerced into buying into Walt's worldview. It's just one of the options on the restaurant menu.

The strategies that made the dinner scene so memorable are not the only things in the show's trick bag, not by a long shot. Contrast that scene with a couple of very different set pieces that may have melted your brain: Walt's diabolical "confession" and Jesse's furious behavior after his ricin realization. Sorry to take so long to get to this sentiment: Holy shit!

Jesse first: His post-realization scenes were shot by director Michael Slovis in a fantastically visceral and violent way. The colors were jarring, and, in the White's house, the off-kilter way Slovis framed the shadows and light inside the home reinforced the sense of chaos. The camera's movements were a jagged indicator of Jesse's volcanic rage, and, of course, the intense emotions of the scenes were fed magnificently by Aaron Paul's performance. The restaurant scene was filled with repressed anger, and Walt's video was a masterpiece of emotional and logical manipulation -- but the restraint was gone for the final sequences of "Confessions." What a bravura ending to the episode.

As I wrote last week, Skyler and Jesse are the characters whose fates I truly care about at this point, and Jesse was so close, so damn close to getting out. Aaron Paul has had very few lines this season, but that hasn't limited his effectiveness at all. In this hour (as is so often the case), every look, every gesture told a heartbreaking story. What I can't get out of my mind is the look on his face as he decided to accept Saul's offer and get a new identity. He felt hope for the first time in a very long time, and it terrified him.

Damn it, I wanted him to go to Alaska and shout "Yeah, bitch! Tundra!"

Walter White may have done a lot of terrible things, but driving Jesse Pinkman to the point where Jesse abandoned his own future in order to burn down Walt's life may be the worst of his crimes. "Breaking Bad" has strategically dangled the possibility of redemption in front of its characters for years now, even going back to the idea of Walt's friends paying for his cancer treatment way back when. Even as these characters damned themselves, there have been chances to get out. Were those chances ever truly real? After all, Walt himself exited the game, only to be dragged back in by hubris. Could he -- or anyone else -- ever really have broken free of the chain of events he'd set in motion? Probably not, but I'd always hoped Jesse could.

But he can't. And the show has made me care so much about Jesse that his understandable choice -- to destroy himself in the process of destroying Walt -- horrifies me to the core of my being. It's a car crash I can't look away from.

I'll make an admission: At first, as Jesse searched his pockets, I thought he was looking for the Hello Kitty phone. I wasn't quite sure what was going on. It did occur to me that he may have been realizing that Huell lifted his pot, but the impact of that discovery was truly sold by the white-knuckle intensity of the subsequent scenes in Saul's office and at Walt's house.

What a tour de force those scenes were, particularly from Slovis and Paul. Think about how passive and despondent Jesse has seemed in the last batch of episodes; he appeared to have almost no life energy left at all. The realization that Mr. White had poisoned Brock and had lied to him even more frequently and hurtfully than Jesse already knew roused him from his torpor, and Paul took the character from zero to 100 mph without missing a beat. ("Say it again, tell me one more time to calm down!")

I suppose that's something Walt White does bring into people's lives: Excitement. You have to give the man that.

Speaking of Walt, his "confession" scene was the aesthetic opposite of Jesse's burn-it-all-down intensity. (And the hallmark of a great show is that it can contain extremes, and radically different modes are knitted together by a strong, unified vision.)

Here's another reason "Breaking Bad" works so damn well as a piece of entertainment: It's impossible to watch that video and not think, "Walter White, you brilliant son of a bitch!" (or words to that effect).

My jaw dropped when I realized what Walt was doing. Like Gustavo Fring before him, you have to give Walt credit for being brilliantly devious. In one move, he'd nearly neutralized Hank as an enemy, he bought himself more time with his kids and he severed ties between himself and the troublesome Schraders.

How much of what Walt said was truthful? How much of his "confession" was a confession about emotions he'd actually felt during the last year of his life? How much of that pain and regret was real? How much did he really want to hug Jesse out there in the desert, and how much of that was a calculating Heisenberg performance?

This is one of those rare times in which the answer "I don't know" is a mark of artistic accomplishment.