"Breaking Bad" has sparked quite a few incredibly detailed fan theories that are fascinating and make it very easy to get carried away dissecting the insane detail on the show.

But nobody is really talking about one big, black-framed elephant in the room: The similarities between Walter White and the show's creator Vince Gilligan.

No, we're not implying that Gilligan is a meth-making, murderous, criminal mastermind, but the creator and his now-legendary TV creation have one very interesting thing in common.

Stay with us! As the fifth and final season is coming to a close (Sundays at 9 p.m. ET on AMC), one theory is really standing out to us: The Hunter-Gatherer theory.

Based on the idea that Walter White (Bryan Cranston) has picked up habits, traits and physical mementos from those who have fallen at his hands in his evolution from Mr. Chips to Scarface, the theory leaves fans with a lot of questions about how it'll all end.

Walt cuts crusts off his sandwiches, much like Krazy 8 had him do before he choked him to death. Walt has started ordering cocktails on the rocks, as Mike (Jonathan Banks) did before him. Walt even reached for a hand towel to fold up and kneel on while throwing up in his toilet thanks to the latest round of chemo ... and who doesn't remember meticulous Gus Fring (Giancarlo Esposito) doing the same before vomiting up the poison that he'd used to kill the Mexican cartel?

Now in flash-forward scenes this season, Walt is bearded with a full head of scruffy hair -- and he's on a mission. People have pointed out that he's using his wife Skyler's (Anna Gunn) maiden name as an alias, and that he wrote his age out with bacon on his birthday, like she's always done for him. And, if you want to get nitpicky, he was seen eating breakfast, which has always been Walt Jr.'s (RJ Mitte) meal of choice. Eagle-eyed fans also noted that Walt is wearing an old army jacket that looks quite a bit like one Jesse (Aaron Paul) used to wear. For those who believe this theory, that means that between now and when we catch up to "Future Walt" time, Walt will kill both Skyler and Jesse, and possibly Walt Jr. (sorry, Flynn), too.

But whose black-framed glasses is Walt wearing in the future jumps? We've been waiting to meet a new hipster drug dealer, a bespectacled associate of Saul Goodman (Bob Odenkirk), any four-eyed felonious character who might get in Walt's way.

In all that waiting, something hit us: Walt's eyewear evolution might not be part of this theory. It might just be creator Vince Gilligan's way of nodding to his own transformation, from TV writer and producer to one of the most sought-after showrunners in the business -- with the new eyewear to match. Or maybe it's his Alfred Hitchcock moment, but instead of making a cameo himself, he had his glasses do the dirty work. Or maybe Walt's old signature specs were just broken in a horrible beat-down and he bought a new pair, plain and simple.

Either way, you can't deny that the before-and-after shots of Walter White and Vince Gilligan here are kind of eerie, both going from wire frames to chunky rims. 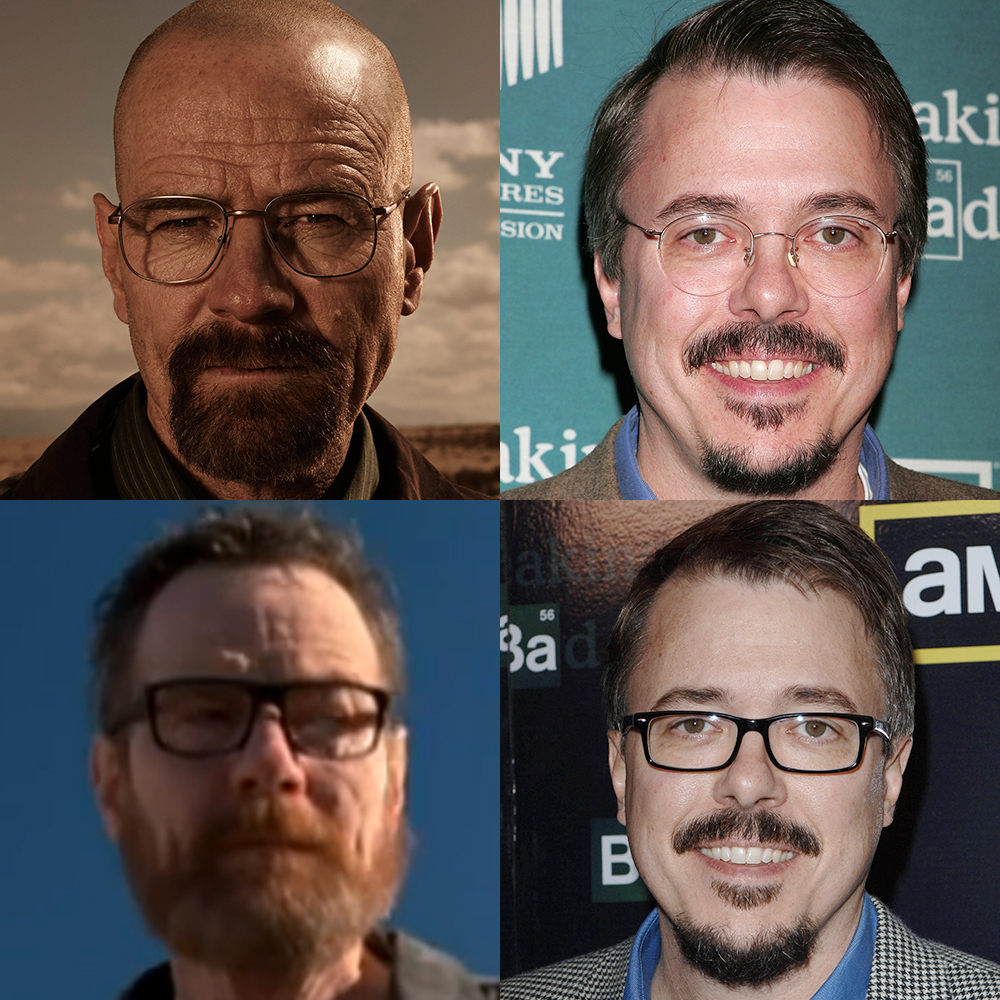 There are still four episodes left in the series, so if someone with similar glasses gets in Walt's way between now and then, all bets are off (translation: expect for them to have a bad end), but if not ... do you think this was Gilligan's way of immortalizing his place in TV history?

Tell us: Which "Breaking Bad" theories do you buy into? How do you think it'll end?