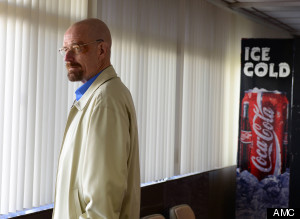 Take a minute, take some deep breaths. If you're anything like me, you need them.

The highest compliment I can give "Breaking Bad" is to say it made me feel ill.

It was actually on the second viewing that I was nearly overwhelmed by a sense of nauseous dread; a physical feeling of sickness. You'd think knowing what was coming would make the incredible second half of "To'hajiilee" easier to bear, but that knowledge had the opposite effect.

Both times, actually, my reaction to what the characters went through was physical and visceral. Even if you didn't experience the sick dread, by God, I bet you jumped when the shooting started.

How lucky are we to have experienced a show with such masterful command of so many different kinds of communication? How sad will we be when those red cliffs and the enthralling morality plays that took place in front of them are gone for good?

But I'm getting ahead of myself. The first time through "To'hajiilee," we probably all felt grave fear for Hank: Any time a leading character takes a victory lap near the end of a TV show's run, it's impossible not to feel extremely pessimistic about their future. Especially since "Breaking Bad" had done such an expert job of setting up Hank for a big farewell -- the lawman got to slap the cuffs on Walter White, read him his rights and exult in the takedown of Walt with his wife. After all that, it was impossible not to wonder what momentous and terrible thing was coming next. This is "Breaking Bad," after all -- something even more terrible than the last bad thing is usually around the corner.

And then, holy shit, that shootout. I'm going to call it: I can't imagine that there will be anything more viscerally exciting and gut-churningly vivid on television this year (except, perhaps, the "Breaking Bad" series finale?).

This was ace director Michelle MacLaren's final "Breaking Bad" episode, and she helmed it as though her life depended on it. Time stopped during that shootout, and yet time exploded in a million directions at once: To say I was on the edge of my seat when the screen faded to black is an understatement. There's absolutely no way that MacLaren could have shot that final sequences of that episode -- from Walt's wild road trip onward -- any more thrillingly.

And then OH HELL NO WE HAVE TO WAIT A WEEK TO FIND OUT WHAT HAPPENS NEXT VINCE GILLIGAN YOU BASTARD.

Sorry for the lack of punctuation in the sentence above, but I think my brain actually melted. And that's one of the things I love most about this job.

Every week I attempt to marshal a few thoughts for you about what happened and I make a few attempts to analyze why that was good or interesting or perhaps challenging. Like many much smarter writers, I try to offer some theories and perhaps insights into what occurred on the screen. But here's a fun fact for you: I live for the moments that can't be put into words, the storytelling peaks that reach into your gut or heart, and make you feel things in your body.

I remember not breathing during the mutiny in "Battlestar Galactica." I remember being startled by a commercial in the final seasons of "The Shield;" I was so engrossed in the story that I forgot they existed. I remember tears spontaneously leaking from my eyes during countless "Friday Night Lights" episodes, especially the series finale. I remember erupting with gleeful laughter when Hurley turned up in a VW van on "Lost." I once wrote about how painful it was to watch the fourth season of "The Wire." And in future, I'll remember that time during "Breaking Bad" that I almost threw up. These are some of my cherished TV memories.

How great is it when stories hook into our nervous systems and hearts and minds, and take us somewhere we didn't expect to go? Intellect is great -- and "Breaking Bad's" ferocious intelligence and thoughtful attention to detail are great pleasures as well. But as I said in my review, the show also knows how to reach our pre-conscious reptile brains, and not many shows do. Well played, Vince Gilligan, you bastard.

The second time through the episode, the sadness I felt for Hank and Marie was both mental and physical: I wanted them to get that win against Walt and it was crushing to know that they probably wouldn't. I wanted them to have that moment of relief. The feeling of sickness crested when Marie, her face at peace at last, says, "I'm much better now."

The sickness that is Walter White invaded my nervous system, and I felt ill for Marie. It figures: Everything Walt touches -- even his own arrest -- is cursed, and I hate that Marie and Hank will likely have to learn that the hard way. Will Hank and Gomez die out there in the desert? How much more can Jesse take? Even if they don't, what fresh hell will Heisenberg put them all through?

The irony is, at that point, Walt has given up -- again. He was out of the game -- again. Yet he still manages to screw over everyone and create chaos. Walter White, you really are the AT&T of people.

Another irony: For all the ugliness Walt has put in the world, the last third of this episode managed to be gorgeous. Even the moment he gave up had a beautiful poignance: Walt, wearing white, his hands raised in a gesture of surrender that clearly recalls Christian imagery, was framed just so against the red desert cliffs. The moment before that, behind the rock, when Walt finally gave up, Bryan Cranston made Walt's face go slack with relief.

This is just one reason MacLaren is such an brilliant director: Walt's car ride, the showdown in the desert, the John Ford badassery of the episode's concluding scenes -- all those big moments were suitably epic and terrifically alive. And yet the episode allowed a small yet vitally important moment -- a pure desire to stop being Heisenberg and just be a human being -- to register on Walt's tired, beat-up face.

Once he'd called in Todd's uncle and his crew, Walt had lost control of the situation. The word "family" has come up a lot this season: From the start, Walt has allegedly done everything for his family. He told Todd's uncle, Jack, that he considers Jesse his family. Jack even throws the word back at him, cheerfully saying "Don't skimp on family -- that's what I always say!" referring to Todd's education as a meth cook.

Both of them have bastardized and cheapened the word: Jack is a murderer who's dragging Todd deeper into a terrible moral void, and Walt is putting a contract on the life of his "family" member Jesse -- and Walt manages to put an actual family member, Hank, in the line of fire as well.

From the start, Walt's mistake was in thinking he could control events, that once he started dabbling in evil, he could control where that evil spread and what it touched. Family was sacred and nothing he did would ever put them in danger. That's what Walt told himself: His hypocrisy and his ego worked hand in hand.

That devotion to family has sure paid off, Walt! Your wife hates you and has come to view you as a walking poison. Jesse nearly burned down your house. Lydia and Saul have come to your place of business -- Saul wearing a bullet-proof vest. Your in-laws despise you and want you to die in prison or fantasize about poisoning you. And you're resorting to using an innocent little boy as a game piece -- again.

Walt has always lied to others about what mattered to him, but in my opinion, "Breaking Bad" has always seen his greater sin as lying to himself. Time and again, it has taken pains to show us that, despite some honest concern here and there, he never really put the safety of others first. He always prioritized his need for power and control, and we've been shown time and again that he could never admit that to himself. Now, cowering in that car and hoping his body isn't riddled with bullets, he's finally paying the price for every lie -- the ones he told himself and the ones he told everyone else.

He's not nearly done paying, though, and everyone else is going to pay as well -- all those people whom Walt allegedly cared for. "No suffering, no fear," Walt told Jack, the man whom he's asking to kill Jesse. Of course, sure, not a problem. At this late stage, Walt thinks he can control and regulate the suffering of those around him, when we all know that, whoever survives the Walter White experience will still be suffering when he's dead.

It's probably only a matter of time before the crew learns about Walt's money pit and quite possibly absconds with his cash. It's probable (because there are three episodes to go) that Jesse won't die in the shootout, but he will be more motivated than ever to take down Mr. White.

It's quite possible that people will die or be seriously injured out there among the majestic scenery. Thanks to the flash-forwards, we know Walt won't be one of them, but it's quite possible that he needed to buy a submachine gun in order to deal with the white-supremacist crew with which he'd stupidly allied himself. Who's the real coward, Walt?

We won't know how this will play out for a week. But hot damn, I'm counting the minutes.

Many more notes (most of my thoughts just seem to fit into bullet-point form this week -- bullets, get it?):