Could the "Breaking Bad" finale have all been a fantasy? A new theory has emerged in the wake of the AMC meth drama's series finale that suggests that everything that happened after Walter White got into that snowed-in car in New Hampshire may have been a revenge fantasy playing out in a dying man's twisted mind.

The theory seems to have grown out of the void left by the critique that the finale let Walter White accomplish every item on his revenge and closure checklist too easily. His scheme to get Gretchen and Elliot to give Walt Jr. his money went off without a hitch. He walked around town without being seen by anyone, or apprehended by the police. He somehow got the ricin in a Stevia packet. He was able to have that cathartic final conversation with Skyler. He killed the neo-Nazis with his trunk machine gun. He saved Jesse. Was it all too neat and clean to have happened in reality?

Emily Nussbaum, the TV critic for The New Yorker, was among the first to articulate that the finale felt very dreamlike. Nussbaum wrote that she would have liked the finale a lot more if the whole thing turned out to be a fantasy happening in Walter White's mind in the moments before he froze to death in that snowy car. Nussbaum wrote:

... halfway through, at around the time that Walt was gazing at Walt, Jr., I became fixated on the idea that what we were watching must be a dying fantasy on the part of Walter White, not something that was actually happening -- at least not in the “real world” of the previous seasons ...

I mean, wouldn’t this finale have made far more sense had the episode ended on a shot of Walter White dead, frozen to death, behind the wheel of a car he couldn’t start? Certainly, everything that came after that moment possessed an eerie, magical feeling ...

Nussbaum was not necessarily arguing that it had all been a dream, like "Occurrence at Owl Creek Bridge" or "Vanilla Sky." But comedian Norm Macdonald took her thoughts a step farther in a string of tweets that made the case for the fantasy theory.

One thing seems clear.He never made it out of that car in the snow, surrounded by police. That's where he died, his final prayer unanswered.

He's the most wanted man there is, but he eats at a diner and chats with a waitress and appears wherever he wants.

It's shot like he's a ghost. And then he says "I WAS alive."

It wasn't a dream. it was the plan of a sick mind.

The theory is tantalizing, but there are holes in it. First of all, if it was all a fantasy in Walter White's mind, then why didn't the show reveal that to the audience at the end? That reveal would have been extremely powerful after the audience watched the flurry of action, gunfire and catharsis play out in the episode. If if indeed was Walter White's fantasy, then, as Nussbaum wrote, it was "wayyy too subtle (a cinematic fantasy that never declared itself, except in my own tiny head)."

The theory breaks down further when it comes up against the Jesse storyline, particularly Jesse's own woodworking dream sequence, which the audience saw him having while he was locked in captivity. In it, Jesse remembers building a box in high school woodworking class, a callback to a story he told in Season 3 at a rehab meeting. It was a story that Walter White never heard. "Breaking Bad" was many things, but it was not "Inception."

And how could Walt know the particulars of the dungeon the Nazis were keeping Jesse locked inside, if we are to believe that Jesse was actually a prisoner for the last several episodes? Walter knew that they had kept Jesse alive in the desert, but for all he knew, the Nazis had killed him already. 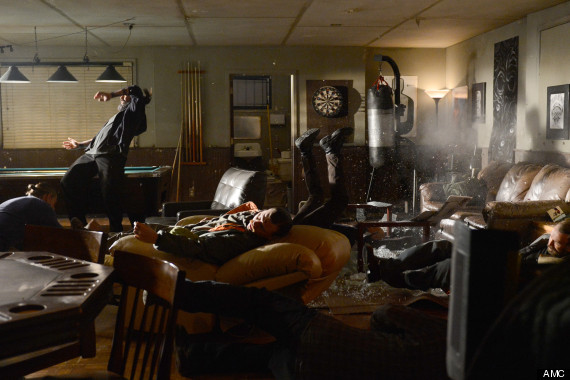 And was the final M-60 shootout scene any more unlikely than any of Walter White's other crazy plans that miraculously worked out? So many of Walter White's pseudo-scientific strokes of evil genius required suspensions of disbelief, from the explosion in Tuco's clubhouse to Walt's poisoning Brock with Lily of the Valley to the wheelchair bomb that killed Gus Fring to the methylamine train heist. Some came with consequences, some went off without a hitch, but they all worked out in Walter White's favor, and we accepted them as plausible, because Walter White was a brilliant mad scientist, and "Breaking Bad" oftentimes gave him the license to bend the universe in the direction he wanted to.

"Breaking Bad" creator Vince Gilligan has not yet talked about the fantasy theory in his post-finale media rounds. But he did discuss the Walter White snowy car scene on the "Breaking Bad Insider Podcast," and it doesn't sound like he conceived it as a fantasy, unless Gilligan is hiding some serious misdirection under his folksy way.

"Well the whole point of the teaser for us in the writer's room was, "What is he doing, is he praying? Who's he praying to? Is it god? Is it the devil? Who would a guy like Walter White pray to? And lo and behold, this prayers are answered, and the key is kind of magically waiting for him atop the visor."

Explaining why he used the song "El Paso" by Marty Robbins in that scene, Gilligan said, "If you listen to the words of the song, wicked Felina is the girl that the cowboy is in love with ... And you hear him singing about, he kills a man for her and then he flees town, and then his love for her is so great he has to ride his horse back into town because his fear of death is less than this pain in his heart that he feels, and he gets killed on the way. And I guess we knew, at the point we started breaking it, that was more or less what was gonna happen with Walt, so "El Paso" on some conscious or subconscious level seemed to resonate ... And then, the way we spell Felina, is an anagram or Finale."

What do you think of the "Breaking Bad" finale as Walter White's fantasy theory? Leave your thoughts and theories in the comments.