This might be a first in the country: The failed West Virginia Department of Environmental Protection is emerging as such an embarrassingly pro-coal anti-mountain public relations nightmare for Gov. Joe Manchin that even retired coal miners have taken to the streets against the state's environmental regulators, calling on the federal EPA and Office of Surface Mining to take over the key duties of the dysfunctional state agency.

UPDATE: Here is video footage of today's protest and sit-in against mountaintop removal and the embarrassing state environmental regulators at the West Virginia Department of Environmental Protection. The video montage was put together by filmmaker Jordan Freeman for Coal Country (see: www.coalcountrythemovie.com )

The uprising in the Appalachian coalfields against failed state government action on mining policy is growing -- today, coalfield residents took their protests directly to ground zero of the state's regulatory failure.

Following 12 previous protests and civil disobedience actions in the Appalachian coalfields this spring and summer, a contingent of four protesters locked themselves to the WV DEP doorsin Charleston, WV in a nonviolent sit-in. Four protesters were reportedly arrested.

While the WVA Department of Environmental Protection carried out the "Blaster's Exam" today, as part of its unfettered support for mountaintop removal mining and the daily detonation of 3.5 million pounds of ammonium nitrate/fuel oil explosives in historic mountain communities, scores of fed-up coal miners and coalfield residents also rallied at the agency's office this morning. The protesters presented an embarrassingly long list of the agency's failure to hold up its mandate to protect and restore the environment, ensure water quality, and enforce strip mining, and demanded the resignation of WV DEP Secretary Randy Huffman.

According to the coalfield residents, the DEP has failed to hold mining operators accountable for violations, refused to thoroughly address the potential dangers of coal slurry injection and to set permit limits for abandoned mine site discharge, and misled residents on regulatory actions.

The protestors posted condemnation signs: "Closed Due to Incompetence" and "Department of Encouraging Pollution." 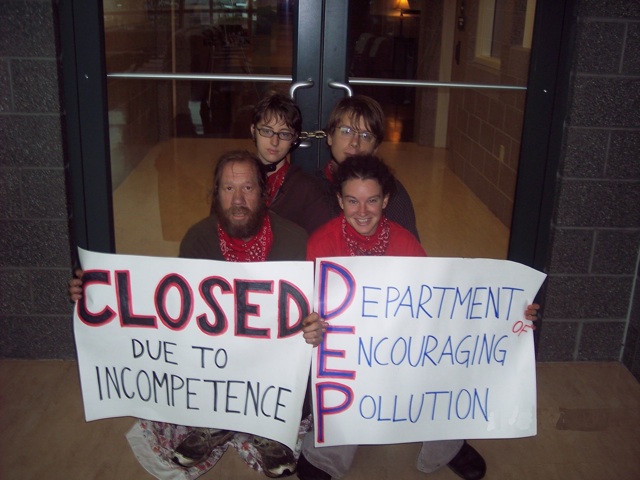 "The WVDEP ignores or dismisses citizen complaints and refuses to exercise their duty to shut down operations with repeat violations or to deny permits to operators with outstanding violations," retired West Virginia coal miner Chuck Nelson declared. "It is imperative that we restore the enforcement of all mining laws, so that citizens' civil and human rights are upheld, and our families and homes are protected from the impacts of mining, and from the hazards of industrial waste."

On Monday, August 10, in a rare call for federal intervention in this growing national emergency, coalfield citizen groups including Coal River Mountain Watch, Ohio Valley Environmental Coalition and West Virginia Highlands Conservancy, along with the Sierra Club and the Appalachian Center for the Economy and the Environment, formally petitioned the OSMRE to withdraw approval of the state's surface mining program and substitute federal enforcement. The petition concludes:

"Given West Virginia's refusal to enforce the law in the face of coal industry interests, we believe that the only remedy that will protect the State's essential environmental resources is for OSM to substitute federal enforcement, in whole or in part, of the state's surface mining program."

The entire petition can be seen here:

Earlier this month, the EPA actually announced its intention to exert greater scrutiny over the WVDEP process of permit applications received for surface mining operations "with valley fills".

Testifying last month at the first bipartisan US Senate hearing on mountaintop removal in a generation, DEP Secretary Huffman stunned the crowd by chucking his environmental protection mandate out the window and openly defended the reckless part of West Virginia's Big Coal economy beholden to devastating mountaintop removal operations. Huffman defiantly lectured the US Senators: "West Virginia and the nation need jobs and coal. Nothing in the debate over mountaintop mining debate is going to change that in the short term."

As if offended by the ancient mountain range and lush hardwood deciduous forests in our nation's carbin sink of Appalachia, the mountain state's top environmental regulator then depicted West Virginia mountains as "steep, hostile terrain."

Hostile terrain? What happened to "Wild and Wonderful"? Or the state motto, montani semper liberi?

This was not the first time for Huffman to declare his horror of the mountains -- in the mountain state.

On April 20, Huffman made an extraordinary admission in an interview with the West Virginia Public Radio, declaring that the mountains impeded the state's development, and therefore, needed to be destroyed through mountaintop removal.

"Mainly what we're concerned about as regulators is the ability to develop land after mining," he said. "You need valley fills if you're going to have a viable post mining economy. You need flat land. And in order to have flat land you need to have valley fills, and one of our biggest concerns is that EPA is wanting to reduce the size and number of valley fills in Appalachia." (The radio interview is here.)

As the state's top environmental regulator, Huffman apparently failed to read the EPA's 2002 EIS report that "it is unlikely that any more than 2 to 3% of the future post-mining land uses will develop land uses such as housing, commercial, industrial, or public facility development" after mountaintop removal operations.

In fact, Huffman and the WVDEP have apparently failed to consider a lot of basic environmental and human rights issues in the coalfields, none more critical than the impact of injecting coal slurry in underground mines. In the face of overwhelming scientific evidence of contaminated leakages of toxic coal slurry into watersheds and wells, Huffman brazenly told an AP reporter this spring: "We studied specifically the possibility the slurry injection had migrated into the water, and there's not a geologic connection between where it was stored and where their problem is." 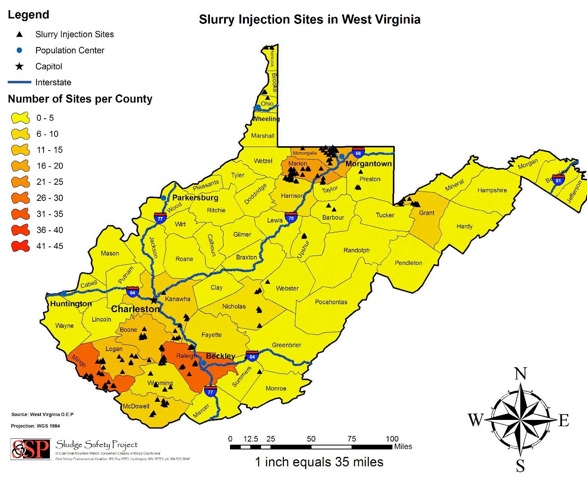 "The WVDEP simply fails to adequately regulate the coal industry," said Rock Creek resident Lorelei Scarbro. "When WVDEP Secretary Randy Huffman runs off to lobby the EPA to grant illegal valley fill permits, he's abdicated his responsibility to the people. Corporate coal influence has become so great inside the WVDEP that he has become a public relations spokesperson for the coal industry instead of an enforcer of mining laws and regulations."

"We will not sit idly by today while the WVDEP is granting blasting certifications for coal companies to demolish our mountains and ruin our homes and communities," said Bo Webb of Naoma. "It is time for Huffman to resign or be fired. He's derelict in his duties and grossly incompetent at best. Quite possibly a case for criminal negligence could be made."