Unemployment rates fell in all but two metro areas in October, though half of them lost jobs over the year, according to preliminary data released by the U.S. Bureau of Labor Statistics and Illinois Department of Employment Security.

Peoria was the only metro area that had a higher jobless rate compared to a year ago, increasing from 6.2 percent to 6.6 percent. In the Kankakee metro area, both the unemployment rate and number of jobs remained the same.

"We are thankful for every single job we have gained since the national recovery began in July 2009," IDES Director Jeff Mays said. "However, at Thanksgiving 2015, too few Illinois residents are feeling this turnaround."

"For 2015, job growth this month was the strongest since February and it is positive that we reversed the four-month decline preceding these numbers. Our job growth rate, however, continues to lag behind the nation," Mays said. "While the unemployment rate remained unchanged in October, our workforce participation rate edged up slightly as more people entered the labor force and more people found jobs during the month."

Here's a breakdown of October's metro and local unemployment report by city, county and metro area. 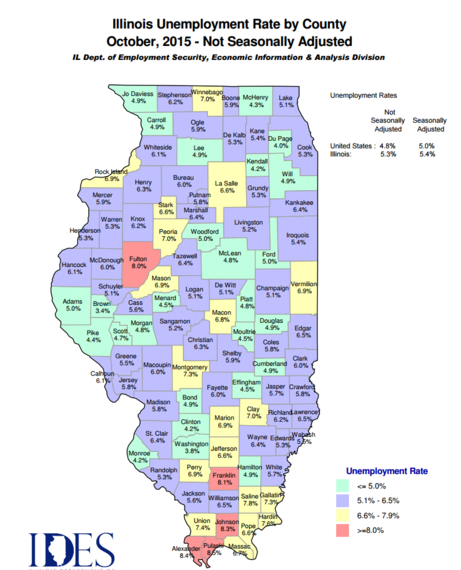