Over one hundred protesters from the Appalachian coalfields were arrested in front of the White House today, defiantly calling on the Obama administration to abolish mountaintop removal mining. As part of the Appalachia Rising events, the coalfield residents took part in a multi-day series of events to bring the escalating human rights, environmental and health care crisis to the nation's capitol.

Kentuckians for the Commonwealth leaders Teri Blanton and Mickey McCoy, the first arrested in today's nonviolent act of civil disobedience, were joined by allies from around the country, including NASA climatologist James Hansen. Meanwhile, protesters led by the legendary Rev. Billy Talen staged a nearby sit-in at the office of the PNC bank, which remains one of the last major financiers of coal companies engaged in this extreme form of strip-mining in Appalachia. 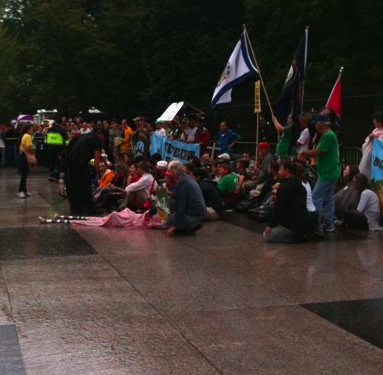 In a stark reminder of the national connection to the coalfields, the Obama administration officials looked on from their White House offices, as their electricity came from a coal-fired plant generated partly with coal stripmined from Appalachia.

As a litmus test of the administration's commitment to science and the rule of law, Appalachian residents are calling on the EPA to halt any new permit on the upcoming decision over the massive Spruce mountaintop removal mine.

Mountaintop removal coal only provides, in fact, less than 10 percent of all coal production.

Fed up with the regulatory crisis and circumventions by outside coal companies, coalfield residents have been rising up against reckless strip-mining practices against the country, from Alaska to Alabama to Arizona. 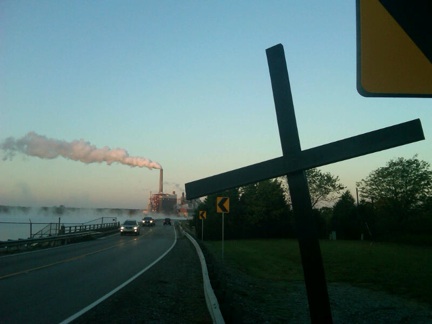 Citing Illinois as the birthplace of the coal industry, and "ground zero in the Obama administration's plan to dangerously experiment with carbon capture and storage technologies for coal-fired plants," a new Black Cross Alliance campaign announced plans to construct symbolic black crosses at coal mining and coal-burning landmarks in the state and across the nation to serve as a public warning: It is no longer acceptable for the Obama administration--and state and regional government officials---to be complicit in maintaining deadly coal mining and coal-burning communities as shameful national sacrifice areas in 2010.

Invoking William Jennings Bryan's "Cross of Gold" speech, the Black Cross Alliance called on the Obama administration and the state of Illinois to halt billions of dollars in taxpayer subsidies for multinational coal corporations, and bring an end to the scandalous coal wars in Illinois by re-investing in a sustainable clean energy policy for the future for the coalfield regions.

The Black Cross Alliance declared: You shall not crucify us any longer upon a cross of coal.

"While the rest of the nation--and world--launches into the exploding new global market of clean energy development and green jobs," the Black Cross Alliance asked, "why have the coalfield regions in the country been left out of the renewnable energy movement and slated for a new generation of increased coal production?"