BREAKING NEWS: The Coalfield Uprising is spreading across the nation.

As millions of pounds of explosions rip across their mountain communities, including the clean energy landmark of Coal River Mountain, scores of residents from the Appalachian coalfields have joined with supporters from across the country in a series of sit-ins, die-ins, protests, and a haunting "Day of the Dead" funeral procession and sit-in in the courtyard of the Washington, DC headquarters of the Environmental Protection Agency.

As part of a nationwide "End Mountaintop Removal Day of Action" organized by the Rainforest Action Network and coalfield activists and clean energy advocates across the nation, sit-ins and "die-ins" and protests are taking place in over twenties cities at EPA regional offices from Kansas City to Denver to San Francisco, and at JP Morgan Chase offices from New York City to Chicago to Kentucky. 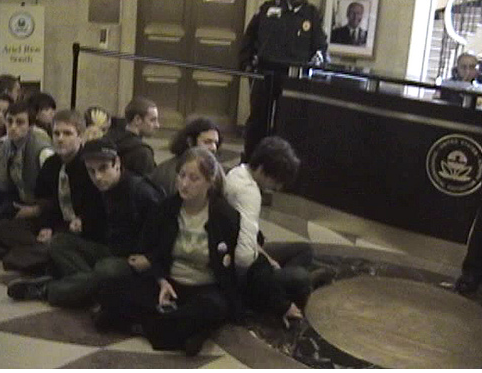 "EPA respects the concerns around the issue of mountaintop mining and
understands the high emotions felt by many Americans. Under the
leadership of Administrator Lisa P. Jackson, the Agency has taken a
number of unprecedented actions within the scope of the law, and in
partnership with other federal agencies to ensure the safety and health
of mining communities. We welcome and seek the voices of all Americans,
and look to them to guide our efforts to protect health and the
environment. We will continue to solicit the input of affected
communities, and engage with the public on this important issue."

Clean energy and clean water supporters across the country are also sending emails to the EPA and President Obama to stop the tragic blasting of Coal River Mountain. 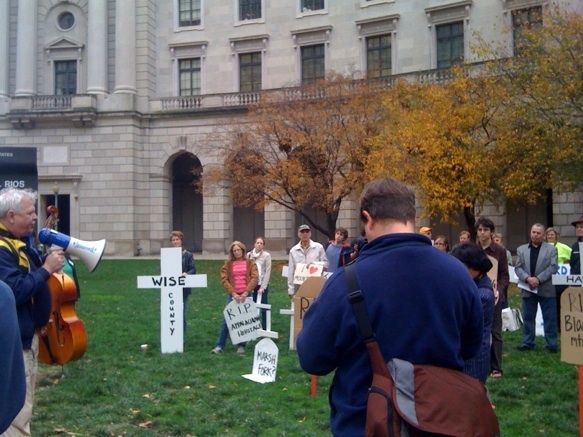 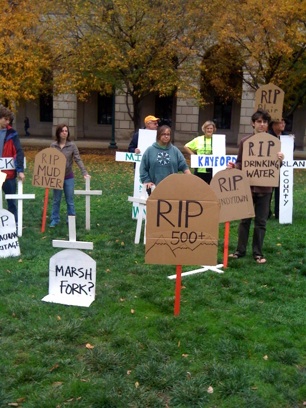 Coal River Mountain has been recognized by the Obama administration's Council on Environmental Quality, and energy experts around the nation, as one of the most important sites for wind energy in the region, and a model for clean energy transition in the nation.

Instead of being destroyed for a limited dirty coal operation, the Coal River Wind project slated for the historic mountain range would provide enough clean energy for 150,000 homes, hundreds of long-term jobs, and millions of dollars in tax revenues and local commerce.

Today's sit-in at the EPA in DC is directed at Lisa Jackson, who recently invoked the agency's veto power to stop the massive Spruce Mine mountaintop removal operation in West Virginia. Coalfield residents delivered a letter to Jackson, calling on the EPA to stop this "unfolding tragedy."

Declaring a state of emergency that threatens the lives of thousands of coalfield residents, the protesters (who include former coal miners) are calling on Jackson and the Obama administration to intervene in the new mountaintop removal operation on Coal River Mountain in a similar fashion, where the initial blasting took place last week. Operated by Massey Energy, the Coal River Mountain mine is setting off explosives that potentially jeopardize the 8-billion-gallon Brushy Fork coal sludge held back by a precarious earthen dam.

According to the mining company's own evacuation plan, if the Brusky Fork dam broke, local residents and children would have only a few minutes to escape a 70-foot high tidal wave of coal sludge.

"Every day, more than 3 million pounds of explosives are detonated in our state to remove our mountains and expose the thin seams of coal beneath," says Bo Webb, a resident of Coal River Valley WV and a participant in today's rally. "President Obama, I beg you to re-light our flame of hope and honor and immediately stop the coal companies from blasting so near our homes and endangering our lives. As you have said, we must find another way than blowing off the tops of our mountains. We must end mountaintop removal." 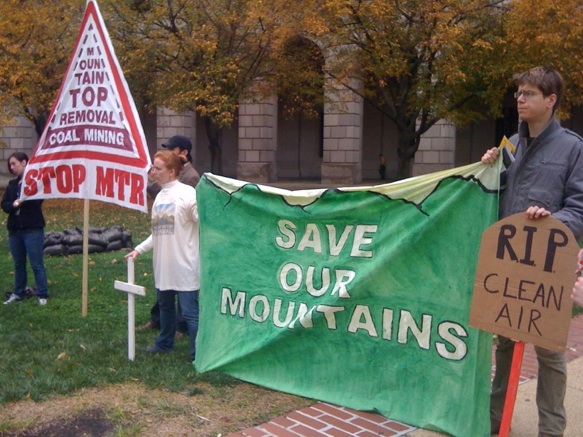 More photos and updates from today's nationwide protests are coming. 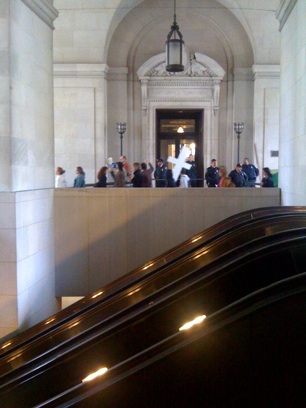 For more information on the local of the protests, see the RAN End of Mountaintop Removal Day of Action page.