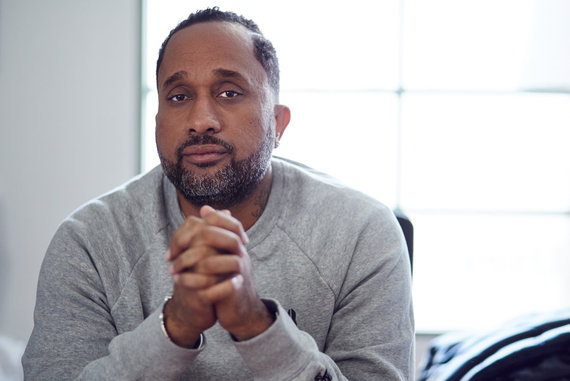 Kenya Barris is the man of the moment.

Though the name may be unfamiliar to the average reader, make no mistake, he's become quickly known, and respected, in Hollywood.

Simply put, there's few individuals in the entertainment industry currently on the same hot streak as him.

In the current television landscape, Kenya Barris stands as one of the most unique voices in the industry since his admitted idol and role model, Norman Lear, the man behind sitcom classics All in the Family, Sanford & Son, and Good Times. With television shows made for ratings these days, it's nothing short of miraculous to write a comedy filled with heart and humanity, especially a network comedy. But Barris has managed the execution flawlessly.

Not only is he the writer and creator of the critically acclaimed (a recurring theme with his work) ABC comedy Black-ish, a series recently renewed for a third season, he's also a weekend removed from the even more wonderful reviews he received for his feature film writing debut, Barbershop: The Next Cut, the third film of the series, one that's reviews disprove the notion that delayed sequels are always terrible (Looking at you Rush Hour 3). However, this isn't Barris's first taste of success in Hollywood. He was one of the creators and producers for an international hit television show that starred his best friend from childhood. You might have heard of it, it was a little show called called America's Next Top Model. Starring said childhood best friend, Tyra Banks.

In the midst of wrapping up the season two finale of Black-ish, I had the opportunity to speak with Mr. Barris over the phone. And though I rambled quite a bit, I came to learn that Mr. Barris is as cool and kind as he is talented and one of the most eloquent and perceptive people I've had the chance to interview. 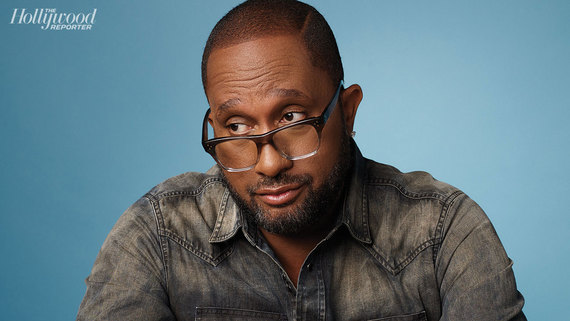 (photo courtesy of The Hollywood Reporter)

What Informs his Writing

"My show is literally based on race. As a minority, you understand, we're forced to have a dual conscious. And that's what I wanted to show the view behind. This is a family who is absolutely black, but they live in a world that's not. And the family isn't as bothered by it as Andre, who sees the world through a much different lens than his homogenized family might. It's based around someone who do live in a sort of real world, and it's not black or white anymore. It's just different than he remembers growing up and he has to navigate."

On Using Black-ish as a Megaphone

"Of course I have experiences and stories I would love to make part of the show, but you can't apply everything. I would say any creative person has that. You can't just force a topic. Whether you're a painter, you want to do a cartoon. Anything. Something may come up that's not your style or suited to what you are working on at the moment. So you file it away, and hopefully find a place for it.
But like this show specifically, it takes on a life of it's own. Shows are like babies. This show has very much found its voice and there are absolutely a lot of stories that I would love to dive into, but this show is not the place to do it. I can touch it on it maybe, but this show is not my personal pulpit. It's the place to speak about what this family is organically going through in a way that hopefully connects with the audience."

"Wow, there are so many people I love, and I know we have a big cast already. Hmm. I just saw the play Hamilton, and though the entire cast was incredible, I really fell in love with Daveed Diggs. His character just really particular popped out to me, and of course I'd also love to work with Lin-Manuel (writer and creator of Hamilton) because he's just staggeringly brilliant. If they happen to have some free time that is."

"I think you have to look at demographics and take it from there. About a quarter of our audience is Black, but when you look at the stats, a lot of black folks watch the series on DVR, and we get a huge amount of viewers from our live+3 and live +7 (cumulative viewers over three and seven days) which puts us in a unique place in terms of the value of the show. So you have to understand television these is consumed much differently now, and networks have had to adapt to the way content is viewed. Live television is primarily reserved for sports and events.

Which is, coincidentally, the mega show counter-programmed to us, and that's Empire. One in four Black Americans watch Empire live. Not one in four watching television, one in four in the nation. And that's just an outstanding number. When we debuted, it was to a higher number of viewers than Modern Family had when it launched. And we stayed for a high number for weeks after that but when Empire aired we lost maybe a little more than half of our black viewers. Empire requires you to watch it live because it's a water cooler show, and so, with that being said, it's a difference in the type of viewing that would affect the overnight numbers, but over the long run, and again with the way television is watched these days, it's not as impactful as you'd think.

But with that said, I'd also love it if more Black folks watched the show."

"I have a huge interest and passion for politics, and especially for this particular moment in our country with the interesting way its galvanized and it's split down these racial lines in a very serious way. And I would really love to explore that racial divide through the lens of comedy and politics, a show that has two different people representing two worlds competing in a very comedic and funny way."

What the Future Holds

"I really feel like all these interview focus on Blackish, and I know how hard it is to create a good television show and I really think I have something I'm proud of, but I like to think beyond that. I want to start really developing more on the film side. I directed my first episode of Blackish this year and I think it went pretty perfectly. I would love to get Blackish to a strong place and then feel that if I had the opportunity to go and direct a movie during the hiatus.
Otherwise, I just finished writing a re-make of Good Times for Sony, and just loved how it went and it's just a great studio. I'm also writing Shaft for Warner Brothers, a comedic version of, sort of like Shaft and his son, and I also have another one called Little I'm producing one for Universal as well. Just keeping busy man." 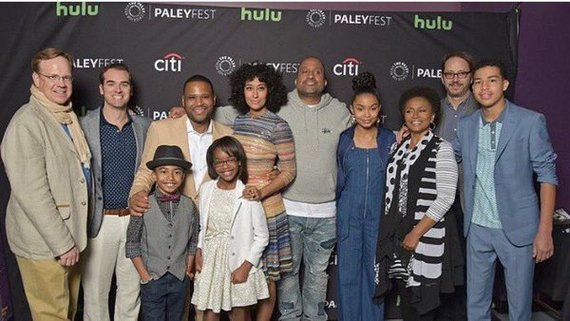 Mr. Barris early in his career has been able to accomplish the holy grail of programming: critical adoration and strong viewing numbers. A feat ABC network did not fail to take notice of, as they recently inked Mr. Barris to multi-year deal with studio. With Black-ish established as a mainstay on ABC for years to come, and the success of Barbershop: The Next Cut (which is in theaters now) proof that his skills adapt to the big screen, it's funny to think this is only the opening chapter in Kenya's growing body of work. It'd no doubt be wise for film studio executives to follow the example of ABC and to ink Mr.Barris to a film deal that another studio will undoubtedly offer him sooner than later.

And though the truism goes that in life there's no such thing as a guarantee, if the work Kenya Barris has already created speaks for itself, then you can at least guarantee that I'll be a viewer of anything he puts his pen to. (Or keyboard? Damn technology taking away go-to-phrases.)

Things are looking bright, and the future shows the sun might never set on the Barris Empire.