When J.Law and company had their private, nude photos hacked and leaked onto the Internet a few months ago, there was some serious anger. Not so much anger at the criminals who hacked into these women's accounts, violating their basic rights -- that's actually the kind of anger I can get behind. No, the anger that surfaced was toward the victims. Oh sure, it was couched in "concern about Internet safety," but the more honest criticism sounded like: "If you don't want nude photos leaked, don't take nude photos." Right. Like if you don't want to be strangled, don't have a neck.

Interestingly, criticism was mostly a by women, about women kind of thing. Women don't like it when naked ladies go mainstream.

And now, we have Kim Kardashian and the full frontal heard round the world. Oh yeah, everyone's panties are in a tightly-wound bunch, so to speak. It is hard to consume any social media without hearing how "nasty" and "disgusting" Kim Kardashian is. Again, most of the anger seems to be coming from women.

I am not a fan of KK, but I found the picture both interesting and funny. Naked women don't make me angry, but with all the hoo-hah, I thought maybe I was missing something, so I considered the criticism....

"She needs to respect her body."

First of all, she doesn't NEED to do anything. She is a grown woman, not breaking any laws. Secondly, I think she is respecting her body. She is not talking smack about it, she is not harming it, and she seems to be celebrating it with pride.

"What about the children!!?"

Yes, with the ubiquity of this photo on social media, it is very possibly going to be seen by young eyes. Then again, it is just a woman without clothes. This should really not be scarring. I also heard a mother angry because Kim Kardashian was now a terrible role model. I can honestly say this photo did nothing to change Kim Kardashian's status as a role model in my eyes. If you want a role model for the little ones you love, try Eleanor Roosevelt or Malala Yousafzai.

Right, because when you become a mom, that is all you are. Not a celebrity, entrepreneur, lover or owner of an ass. Again, the picture is not one of KK ripping the wings off bugs; she is not doing anything harmful in these photos. When her kid sees these one day, he will likely roll his eyes and say "Mommmm!" End scene.

There is a lot of speculation about surgical enhancements that may have contributed to the striking nature of the photo. I don't know if it is the case or not, and it is really none of my business. People have uniquely shaped bodies and some chose to sculpt their bodies with silicone. Again, no puppies are dying here.

Yes, I am sure it is. That is how magazine art is created. The lighting and makeup are also part of the art of the picture. Kim wasn't just walking around in a sequined gown in her kitchen when she noticed a plain brown backdrop and thought, Hmmm.... I am going to pour myself a glass of champagne.

It is an illusion; a fantasy. Photoshop is a creative tool. Let's assume all magazine covers are Photoshopped and move on.

"She is doing it for attention!"

Yes, that is what celebrities do.

"It is not classy. It is just trashy."

I get that you feel that way, so you should certainly not pose nude for magazines or balance things on your butt -- but please, just zip it. Is it classy to make negative comments about a person's body or her choice?

"She is just doing it for money. Like she needs it!"

I don't know what Kim Kardashian needs or does not need, but I do know that I would rather pose for pictures where I was compensated and had a choice than have photos stolen from me and published without my consent.

"She is a vapid, no-talent reflection of society's celebrity-mongering."

Maybe. But here we all are -- talking about her.

So, since I have not heard a compelling argument about why I should be grossed out by a naked woman with a big ass in a magazine, I am left to speculate about why many women find this so unsettling.

I don't know the answers to any of these questions. All I know is that balancing cups on your ass is hard, and I need another coffee. 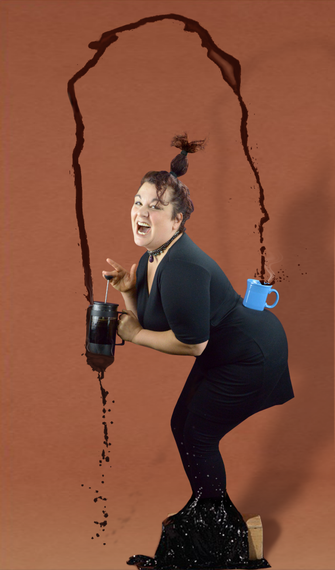