It wasn't until 2004 that Julie Angel, a 30-something female filmmaker from the South of England, was introduced to parkour through Channel 4's documentary, Jump London. All of France and most of continental Europe were already infatuated with the radical sport, or a way of life that emerged in the concrete clad, boring suburbs of Paris where life was predictable and unsatisfying for an unlikely group of mavericks.

'Yamakasi', a typical Luc Besson feel-good action movie, romanticised parkour and, in casting the discipline's founders as main characters, transformed the life of the young, rogue athletes and thousands of those who wanted to follow in their footsteps after seeing them on screen. 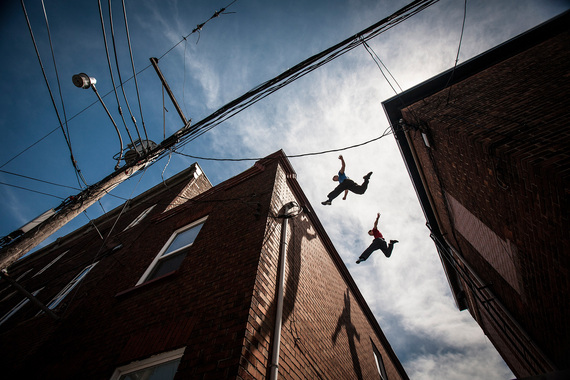 Despite being remade into an international blockbuster, the real history of parkour remained hidden. It would likely still be known to the wider audience only through speculation and gossip if, in 2004, Julie Angel didn't settle on her couch in Whitechapel to watch Channel 4's new documentary. What she saw intrigued her so much that not only did it lead her to seeking the roots of the discipline, but also to getting up from the couch and becoming a practitioner herself.

Over a decade of filming, interviewing, leaping between concrete walls and balancing on narrow rails, combined with PhD research and personal relationships with the parkour founders, came to fruition in the form of a non-fiction book.

"Breaking the Jump; The high-flying parkour rebellion" is a must-read not only for fans of death defying physical stunts and Besson movies, but for everyone interested in how a niche pastime of a few French immigrant kids went on to become a global phenomenon reaching as far as the US, Dubai and London's very own Borough of Westminster where it was used to reduce anti-social behaviour among its youth.

In documenting the good, the bad and the crazy of parkour's early history, Angel appears brutally honest and we can only speculate how much she chose to smooth things over for the sake of real-life friendships with her characters. She portrays them in a deeply engaged manner that could perhaps be more vivid had she put herself into the shoes of a person who never came in contact with the parkour founders.

At times, the character building lacks differentiating details that would ignite the imagination of the reader but at least the protagonists emerge as well-rounded, believable figures. Especially interesting is Angel's somewhat negative portrayal of David Belle, known to international audiences thanks to the second parkour inspired movie by Besson, 'District 13'. Made famous by a breathtaking chase scene, Belle is seen by many as the father of parkour. Here he is described as a conflicted and troubled individual; he is as charismatic as he is incapable of establishing genuine relationships with his peers and followers. 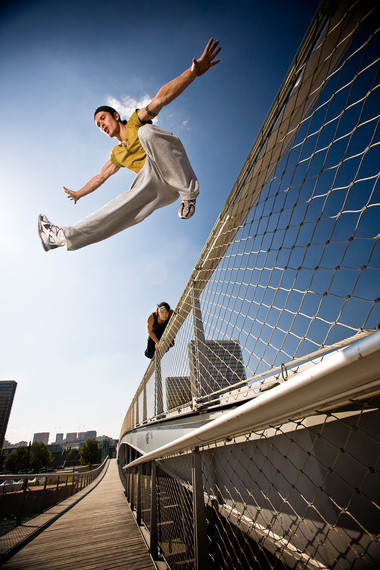 Instead of glorifying a single character, Angel attributes the development of the sport - equally a discipline of athletics, art and a philosophy of life - to a group of interconnected individuals from Parisian suburbia. Her research led her to highlighting the roles of Stephane Vigroux, Yann Hnautra, Williams Belle and others as the first generation of practitioners. Angel shows a clear line of succession between them and their followers, as well as offering a view of how the new discipline spread further through pop-culture and the internet.

The narrative is interwoven with enlightening details from the history of athletics and physical education, and in those passages Angel reveals herself as a writer more comfortable in the realm of academia than reportage. This can likely be attributed to the experience of writing her previous book, 'Cine-parkour', a PhD thesis on parkour and visual anthropology.

All in all, the story created by Angel is as disturbing (friends dangling each other from dazzling heights by their ankles, with no protection against immediate death, only to conquer fear and earn their right to belong), as it is inspiring. We were not designed to live our lives motionless in front of a screen, but can practicing the art physical perfection and psychological discipline be an alternative to the emptiness of the consumerist lifestyles of late-capitalism?

Many questions are asked, some are answered and some are left for our consideration. Angel's insight into what makes seemingly dare-devil, ultra-high risk stunts possible is simply fascinating.

The open-ended history of a young group of friends, now in their thirties and forties, is proof that extraordinary things can happen in the most mundane settings. Julie Angel herself is evidence that we can all push ourselves more than we might assume. A middle-aged female academic, with blond hair and a very British accent, you can sometimes see her in the streets, doing pushups or leaping over metal railings. While Angel embodies the egalitarian ideals that pertain the world of parkour today, her book is a recording of the wild and sometimes brutal roots of l'art du deplacement: a discipline that forever changed the definition of impossible.