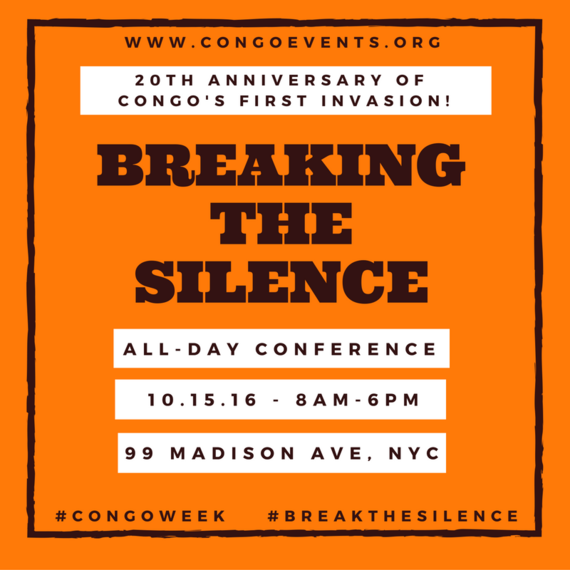 Twenty years ago today, in 1996, Rwanda and Uganda invaded Congo, which was then known as Zaire.

The 20th anniversary of the invasion of Congo and the apocalyptic killings unleashed thereafter will be commemorated with an all-day conference, "Breaking the Silence" in New York City on October 15 at ThoughtWorks located in Manhattan at 99 Madison Ave, New York, NY, 10016.

Can the Congolese people eventually free themselves from the shackles of Congo's dictator Joseph Kabila and the suffering caused by the multiple invasions by its neighbors who covet the country's immense mineral wealth estimated at about $24 trillion?

What about people in the other East and Central African countries; can they too defeat tyrannies? What can be done about the destructive role played by the U.S. which continues to support with financing and weapons the regimes of Paul Kagame and Yoweri Museveni?

These are some of the questions that human rights activists, scholars, journalists and, survivors of the atrocities will address during panel discussions and documentary film screenings at this coming Saturday's all-day conference.

The conference is free and open to the public but RSVPs are required at Congoevents.org "20th Year Anniversary Commemoration."

The 1996 invasion toppled long-time CIA agent and dictator Mobutu who ran Congo into the ground after he seized power in 1960 from independence hero Patrice Lumumba, who was murdered. So few shed tears for the demise of Mobutu except those who benefited from the kleptocracy; he's believed to have siphoned off $5 billion into foreign accounts and assets.

Gen. Kagame and Gen. Museveni installed Laurent Kabila as president. When Kabila tried to exert his independence from his two benefactors Rwanda and Uganda invaded again, this time seeking to topple him and to install a pliant puppet.

Angola and Zimbabwe, which have superior airforces and tank divisions, intervened and repulsed the invaders who were about to seize Kinshasa, the capital. Rwanda and Uganda ended up occupying mineral-rich eastern Congo. Eventually that part of the country became the epicenter of disaster: resource plunder; massacres; ethnic displacement; and, mass sexual assaults against women and men so pervasive that Congo became known as the "rape capital of the world."

How horrific were the atrocities committed after Rwanda's and Uganda's second invasion?

The United Nations conducted a survey of the cites where the alleged retribution killings occurred --for the genocide in Rwanda in 1994-- and in 2010 the world organization issued what is known as the "Mapping Report" covering atrocities from 1993 to 2003. The U.N. concluded that the killings in eastern Congo, primarily by Rwanda's army, if confirmed by a judicial process, may "constitute crimes of genocide."

Rwanda's and Uganda's support for various warring militias through the years including CNDP and later M23 --both countries use the manufactured chaos as cover to steal Congo's resources-- have led to unimaginable suffering. No one really knows how many Congolese have died. Some estimates place the toll at six million.

Congo filed a complaint against Uganda at the International Court of Justice (ICJ); the court in 2005 ruled in Congo's favor and ordered $10 billion in reparations which Uganda has never paid and Kabila has not attempted to enforce the judgment.

The ICC also opened a criminal investigation into alleged crimes by Uganda's army. On June 8, 2006, The Wall Street Journal reported that Gen. Museveni himself urged then U.N. Secretary General Koffi Anan to block the probe. Museveni evidently feared that he too could be indicted, like Lord's Resistance Army (LRA) leader Joseph Kony or like the Sudan's Omar Hassan al-Bashir. No wonder lately he's been denouncing the ICC.

Meanwhile Joseph Kabila, who was supposed to step down at the end of this year after completing a second presidential term of office has made it clear he's not leaving. On September 19 the opposition in Congo claimed as many as 50 civilians were killed by Kabila's security forces after people demonstrated against his bid to extend his regime.

Kabila is following the examples of other regional dictators like Uganda's Museveni (in power since 1986) and Rwanda's Kagame (ruler since 1994).

Yet the Congolese, led by the youth have remained defiant and protests against Kabila's plan to prolong his regime continued even after the bloody suppression.

Meanwhile new killings have started in Beni, in the Congo's North Kivu region. These political developments in the Congo will be covered at the all-day "Breaking the Silence" conference on October 15.

Meals will also be served to conference attendees.