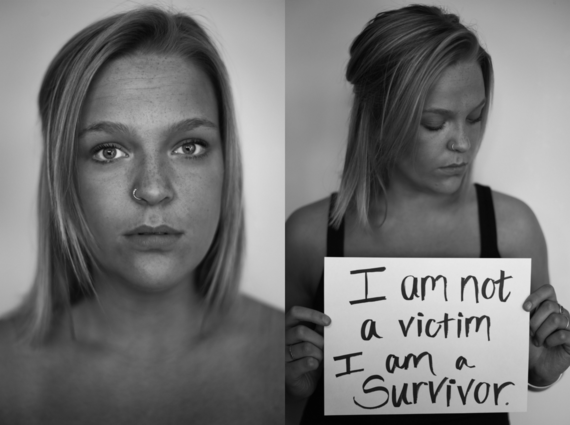 Ali Miller was a 17-year-old Minnesota high school student when she was sexually assaulted at a party by a boy in her social group. She confided in friends who refused to believe her and found herself verbally harassed in the hallways at school. It took her a couple weeks to tell her parents, and then she decided to share her story at her church. She was immediately approached by other young women with similar experiences.

Ali discovered that rather than feeling stigmatized, sharing her worst trauma was deeply empowering. Now a bubbly, radiant junior in college, she recently launched the "I Am Movement," in which she photographs real women who share their experiences of vulnerability and trauma, from sexual assault to racism to mental illness, mainly on Instagram. Started at the University of Minnesota, Twin Cities, where Ali is studying Strategic Communications, the movement has spread cross-country as other women saw the posts and reached out to participate.

Miller twists what society perceives as weakness into strength, capturing the beauty and warrior-like qualities in the women she features. I recently interviewed Ali to discuss how she found the courage to publicly tell her story, and in the process inspire dozens of other women.

What inspired you to start this movement?

I have always been fascinated by vulnerability. You can really make connections through that, you can build a community. One of the bigger things that fascinated me was last year I was approached by Be Bangles engraved bracelets. They reached out to me because they had heard my story and asked if they could write an article about me. I had never talked about my experience before but had heard talking about [it] would help me move on so I agreed. After the article was written I sort of fell into community of other survivors and found other people who were open to talking about their vulnerability.

Why do you think we back away from talking about these issues in our everyday lives?

It's scary. It is completely terrifying to talk about things that make you quote-unquote "look weaker." I find that especially college-aged women are forced to have a front. They have to go to class, get an internship, look flawless, stay fit, call their families, and a million other things. It creates this mindset where people think, 'I need to be perfect; I can't talk about my imperfections.' Even though these stories and secrets could completely shape who we are, we can't even talk about it. I wanted to change that.

What was your initial reaction to the support behind this movement?

I knew that I wanted to start small with this movement. I got a lot of support from within my sorority and Greek life because of that. But after a while I was really surprised when strangers reached out to me and wanted to be part of the movement. I just thought, 'Oh my gosh, people are willing to talk to a complete stranger about their deepest darkest secrets and put it on the internet. That's crazy.'

A little later on, some girls from UCLA [University of California, Los Angeles] started reaching out. They weren't in a sorority or anything but they knew one of the girls in the movement and saw it pop up in their "Explore" tab on Instagram. It was crazy to see how far the movement had spread.

I think another thing that surprised me from the movement was when I would post a picture of a girl, people would comment, 'hey I don't know you but I am going through the same thing.' That is what I really wanted from the movement, so seeing that connection was really awesome and powerful.

How do you think this movement is impacting your community on campus?

From what I've heard from other girls who participated and who follow the movement, I think it's opening doors to talk about things. Vulnerability. I'm a very open person and I've talked about my story before, but after launching this movement, talking about it has made it so much more comfortable for me.

Also in Greek relations it has connected all of us. Sharing our stories has made us all feel a connection that wasn't there before. I think getting more sororities connected and involved is so important. Girls have also said that this movement makes the big school seem smaller. It has shown that no one is alone in what they are going through. It's made people on campus more human, I think. To have stories of women not just be part of their past, but instead living, breathing stories.

What feeling do you think the women who participate in this movement get when they share their stories and see them published?

It's a really cool feeling watching from the first girls I photographed to two girls I worked with yesterday who I had never met until then. I have seen an overwhelming sense of relief every time. Watching the girl that I'm photographing be nervous before the picture is taken and watching the different ways each person handles what they are feeling. Some girls will be totally fine then my camera will be in their face and they'll say, 'oh my gosh I'm so nervous.' I always text the person before I post their picture to make sure no one ever has any regrets about going public. But the text I get after every time is, 'I feel so much better.' So yeah, I would say relief.

Do you have an end goal in mind for this movement?

I don't know, I've been taking it as it comes. I didn't expect it to grow as fast as it did. I've been asked about expanding groups I photograph because right now I only do college women. People have asked about men; different age groups; [people] outside of the Minneapolis community. For right now all I know is I want to stick to the college age.

Right now I'm just going with the flow. Eventually I want to start a nonprofit where I take pictures of survivors of sexual assault. When I started this movement I was a bit nervous but all I feel is pure excitement at this moment.