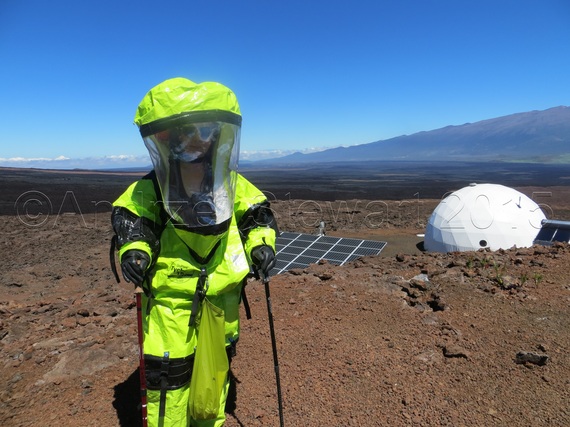 Standing on a hill over the HI-SEAS dome on September 9th, 2015. Photo by Chief Engineer Andrzej Stewart.

Life as we know it stands opposition to a constant downward force. Even high-flying objects like the International Space Station are falling fast. The ISS stays aloft because it's traveling forward at just the right speed* that, by the time it would come crashing down to Earth, the planet's surface has curved out of the way. The same principle is true for those of us on the ground. Even standing still, we experience a pull towards the center of the Earth. Fortunately, an equal and opposite force holds us up (the normal force). The ground is firm beneath our feet, catching us... right up until the when moment it isn't, which is what happened this month.

That's a fancy way of saying that in the last 30 days, the skies broke open, the ground vanished, and things changed. Humanity broke records. In just one example, 18,000 of my fellow Americans applied to be astronauts. That's more than twice the number that tossed their hats into the ring during the Apollo Era; a time when we were mad to beat the Russians, to leave footprints and flags on the Moon, to make our indelible mark on history. These days, we live in space with the Russians. We get to the ISS using their Soyuz rockets. We haven't been to the Moon in a generation (ancient history, to some). Given all that, what does it mean that SO MANY would swap promising careers in research, aerospace, medicine, and the military for a $60k-a-year gig wearing a blue jumpsuit? Maybe it's for the same reason that every eligible member of my crew applied to the corps: so that we can spend the rest of our lives hanging out with you all, talking about science, getting people excited about space - a peaceful, hopeful activity that the world can get behind - and move our species into an era of fulfillment and discovery. For all its difficulties and dangers, it sounds like a pretty good way to spend a lifetime. 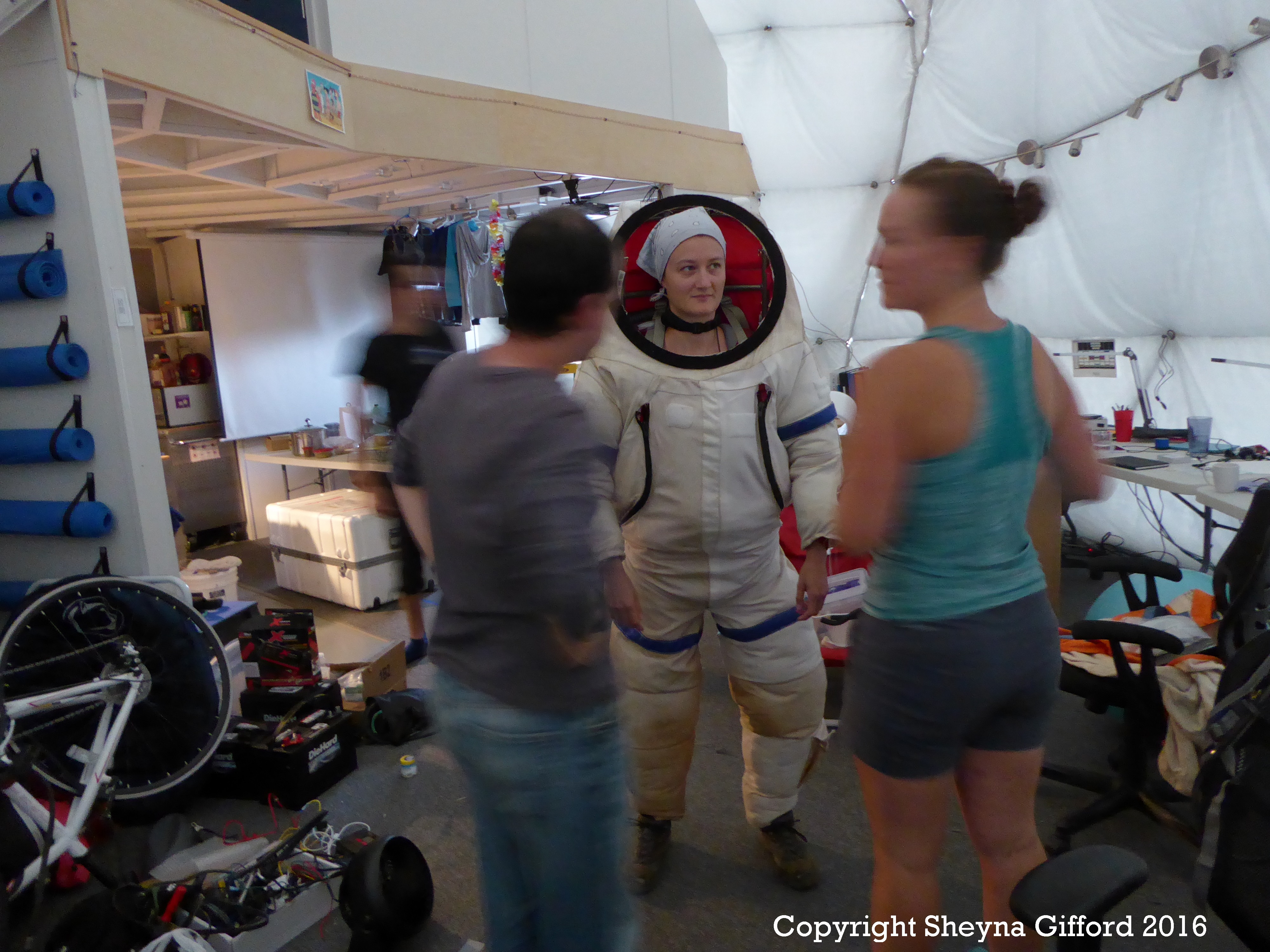 Speaking of dangers, almost a month ago, I had a bit of a run-in with gravity. Simulated Martians do a lot of suiting up and going for walk, much like real Martians will one day. During these walks, or EVAs, we take various measurements and samples. In this function, we're about a million times more efficient and nimble than any Mars rover. However, we are just as susceptible to accidents. In the middle of a geology task for mission control, I was standing perfectly still on the side of a wide lava channel, looking for a way over, when, suddenly, the solid-looking formation beneath my feet collapsed.

Fortunately, I didn't fall far. A split-second of acceleration and velocity later, the bottoms of my feet hit even an older lava bed. My right knee struck a rock, and I came to a stop.

If someone had been filming the scene, it would have looked like the Earth decided to swallow me whole, didn't like the taste of my Tyvek spacesuit, so it changed its mind halfway through. With the aid of two trekking poles (indispensable on any planet), I hauled myself out of the human-shaped hole and back up to the hab.

Falls, even short ones, are no joke. According to the CDC, falls account for 10% of occupational deaths in the US. These falls usually happen from buildings or scaffolds on construction sites. They can be prevented, at least in part, by the use of tethers. Sometimes, they can be arrested with nets. As anyone who has worked on a rig, on a ship, or in mining/agriculture/forestry can tell you, tethers and nets don't travel well. There's only so much that you can do to prevent falls or catch someone who's falling in the field. This is something to bear in mind when we're packing people off-planet to places that have their own gravity. When it comes to suit design, the lighter and tougher, the better. 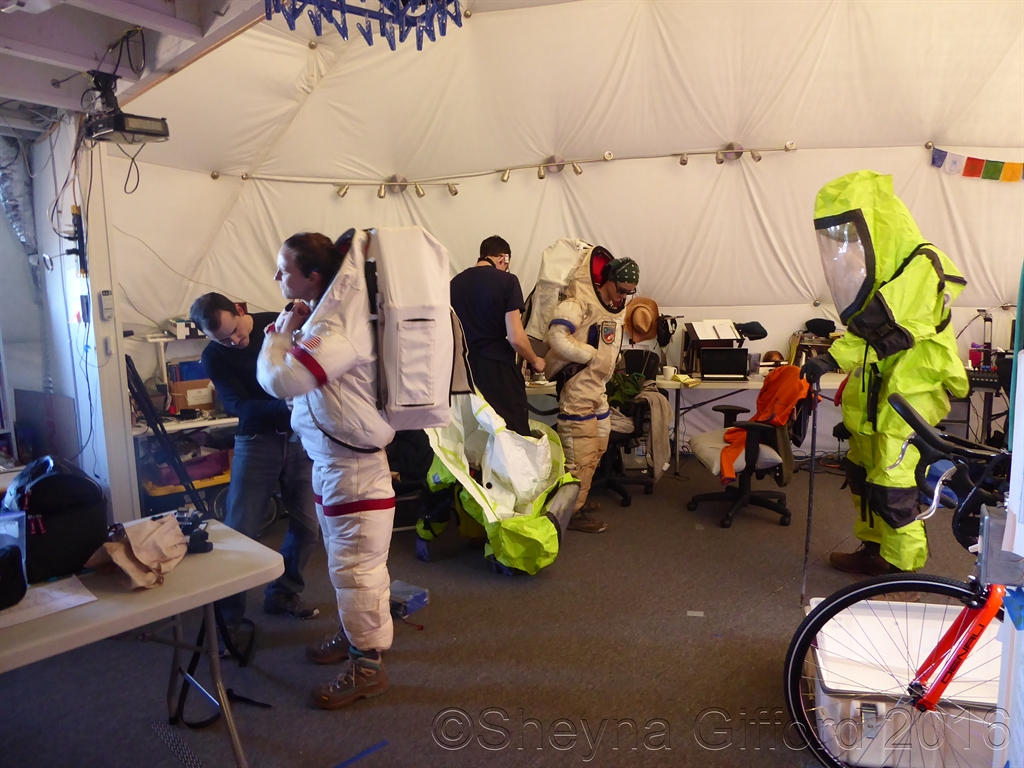 My suit did its job admirably. Two-hundred-year-old lava rock can be as sharp as broken glass, as smooth as paving stones, or anywhere in between. This rock face was more like the former, but the suit's plastic yellow exterior bore the brunt of the rock's rage. In its wake, the only damage to my leg was from the impact of the fall itself on my knee. Right away, I was able to walk. A month later, I can run a mile. What I still can't do is climb. Which is how I ended up alone on sMars.

Yesterday, simulated Mars experienced a simulated radiation storm. On Mars, best place to hide during these events would be in a cave. Fortunately, on this mountain, we have many. The ideal cave in which to hide from fast-moving solar particles has a small opening and a center big enough to house six people, sitting or standing, for as many hours as it takes for the storm to pass (or, on Mars, until nightfall, when the planet itself acts as a big, round radiation shield).

Roughly a kilometer north-northeast of the hab, there is exactly this kind of formation: a huge cave, entered by crawling over some boulders, then scrabbling down a steep slope. At the base is a large, flat area, big enough to accommodate the six of us for 12 hours. However, thanks to gravity, during this particular storm, only five of us were in peak climbing condition. So, while my entire crew hiked off to hide in a cave from a simulated storm, I stayed behind, and rode out half a day alone in the habitat. 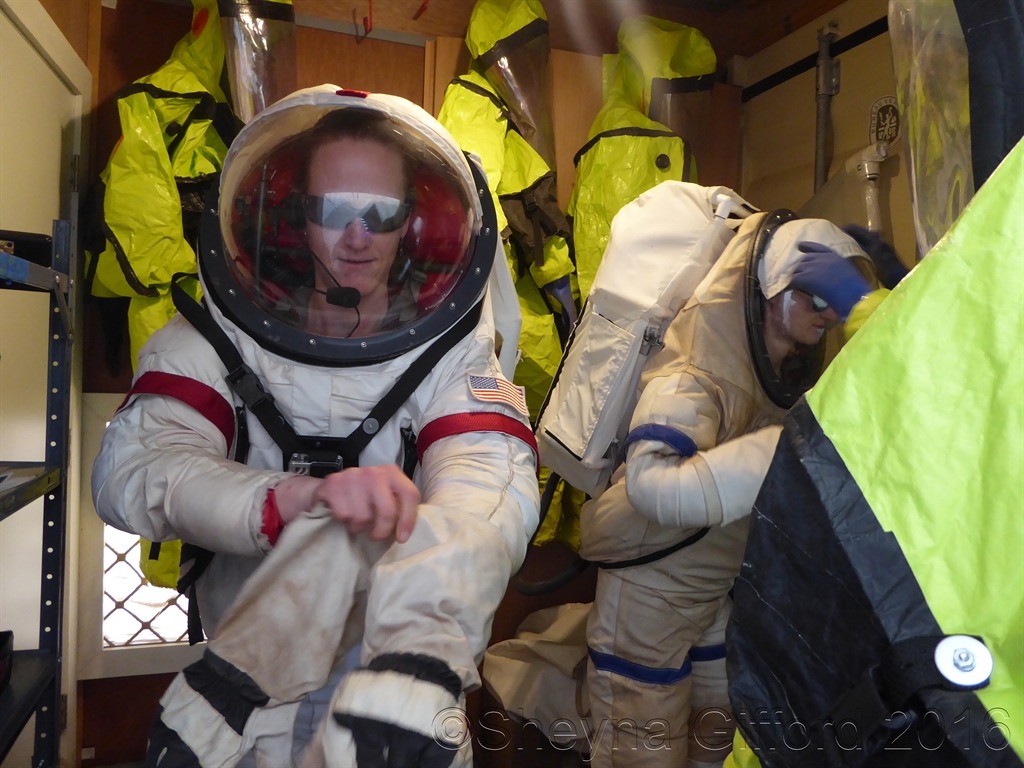 It was quite the Mark Watney moment. Being the only one in the hab for a day was a first - for me, certainly, and for the mission in general, I believe.

Sunday is our normal cleaning day. With my crew hunkered down under several tons of lava rock, someone had to see to the kitchen, carpet, and bathrooms. Not to mention the food. Hiking and hiding is hungry work. The person whose cook day it was was currently indisposed on account of a deadly solar radiation drill. So, making sushi and cleaning came first. After THAT, I got to play. Specifically, play my didgeridoo, loudly, in the common area.

This is not something I would ever do if anyone else was home. My crewmates describe the sound as, at best, "something you wouldn't hear in nature", and, at worst, "an angry swarm of bees" or "a truck backing over the hab." Well, you all can't hear it from inside a 1-kilometer-distant cave, can you? So here I go! "Whom-whom-whom-whom..." 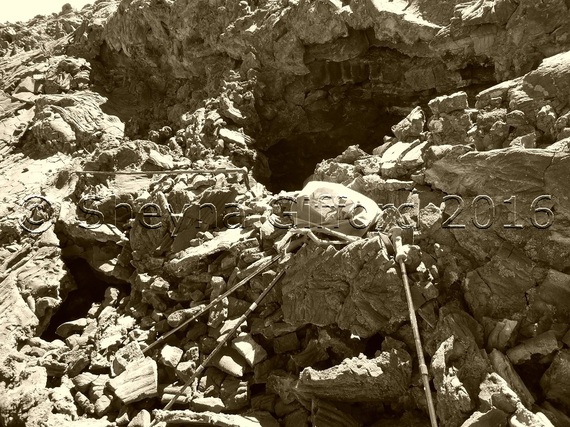 The crew's gear outside a cave in the nearby lava fields.

The other thing I got to do while everyone was gone was practice sword in the main area during the day. Swinging any kind of stick in an enclosed space in the presence of others is generally discouraged - unless the others happen to be doing it, too, in sync with you. As I am the only Japanese-style swordfighter on Mars, I usually stick to waving my stick around late at night, when everyone else is upstairs. To have a day to practice in the glow of the dome was quite lovely. The sun shone through the fabric seams in the curved ceiling, lighting up long lines that the wooden sword-tip swung through easily. It was like practicing sword in the center of an illuminated globe. I would probably never have experienced it if I hadn't fallen into that hole in the Earth.

Making discoveries, breaking legs, breaking mountainsides and records: that's been that kind of month. A really good month, all things considered. My apologies for not blogging here as often. There will be another one soon. Why? Because we're five days from the halfway point in our mission. It's been nearly six months since we landed on sMars! I can hardly believe it. I'll post again about reaching the halfway mark - and beginning the dreaded 3rd quarter - in short order. Until then, be well, and may there always be someone, or something, there to catch you, gently, when you fall. 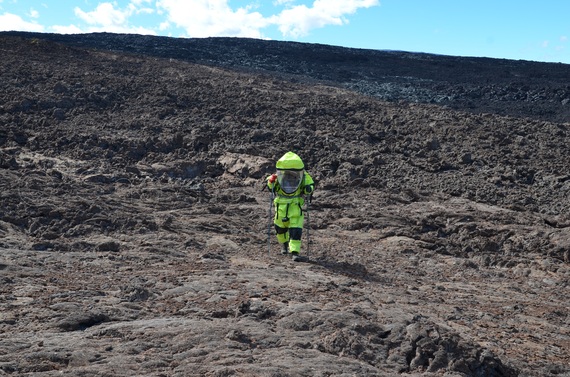