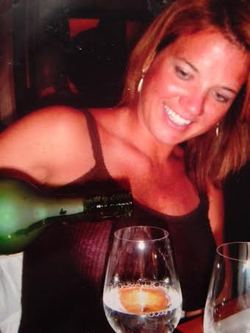 Throughout high school and college, I was the girl who always had a serious boyfriend.

I've been in love two times in my life. Actually, that's a lie...three times. But only two of those were with men...the other was with alcohol.

I was introduced to alcohol years before things got serious between us. There was an instant attraction once we met...our chemistry together was electric. I immediately loved the effect alcohol had on me. I felt more alive than I ever had. When I was with alcohol, it made me feel prettier, funnier, and more confident. We had some great times together and alcohol was always there for me. It didn't matter what time of day it was or how I was feeling. I could always count on alcohol.

I remember the good times, and yes, there were a lot of good times with alcohol. But like most relationships that come to an end and things got uglier and uglier between us. We were toxic together. I hated alcohol. I didn't want to be in the relationship anymore but I didn't know how get out of it.

Alcohol didn't turn on me. I turned on it. I was the one who abused it and mistreated it. We were no longer good together. I crossed a line and there was no going back to the way things used to be. It stopped working for me which made me only try harder, drink more, and fight like a ninja warrior for control. It was a nightmare. I was the sick one in the relationship and so I was the one that had to leave it. Alcohol was never going to leave me.

It was the hardest relationship I ever had to walk away from. I thought for years that things would change and get better between us, but they never did. I don't know how many times I told myself I was done with alcohol and swore I was never going back. I always went back. It was comfortable and familiar; even it was miserable, it's what I knew.

I woke up one day and years of fear, anxiety, confusion, guilt, helplessness, shame, despair, desperation, and a purposeless existence outweighed my resistance to change and I asked for help. I needed help in leaving alcohol. I knew it wouldn't be easy and it wasn't, but it's worth it.

As soon as the words came out of my mouth that I needed help, I wanted to take them back. I thought "just give me another chance. I'll change. I'll do better." But I had made those promises to myself a hundred times and knew it was a lie...fear was kicking in and I just wanted the comfort of my best friend, my confidant, my companion. I knew alcohol would take those feelings away, if only temporary.

Somehow I stayed sober for a few days and made it to rehab. Just having distance between me and alcohol made life better. My head started to clear and when I took pen to paper and started working out years of reasons I stayed with alcohol, I started realizing how toxic that relationship was. I knew that there was nothing casual about our relationship.

We were together for 12 years... longer than any relationship I'd had with a guy.

Breaking up with alcohol is similar to breaking up with a guy. The book It's Called a Break Up Because It's Broken, says it perfectly... "Every moment of pain, weakness and discomfort puts you in a position to choose how you will react and how you will alleviate your condition. Calling him doesn't make it better -- it only pulls you back into the cycle of heartbreak. He is the past. You are the future."

And so I have to remember that with alcohol. We broke up for a reason.

Alcohol is my past. Sobriety is my future.