My hips are spreading, pressing up against the waistband of a pair of '90s pleated pants that she wore so much, the lining is beginning to fray. I've begun to fill out her cocktail dresses, last dry cleaned in 1997. The leather of my watchband is threatening to crumble at the ridge where it's been clasped to fit the exact circumference of a wrist, though it's hard to say where the wear from my mother's wrist ends and the wear from my own begins.

My body is becoming my mother's.

I can look in the mirror and point out her eyes, her jaw; I can itemize the objects I have of hers and touch them until they disintegrate, but there is one part of her legacy that I can't touch or inventory: her cancer.

In July of 2006, my mother sobbed through her annual breast exam because a close friend had just been diagnosed with breast cancer. Mom's test was clear that day, but three months later, she stepped out of the shower and saw a 4 centimeter lump rising out of her own breast in the mirror. Tests revealed that she had Stage IV inflammatory breast cancer -- a rare disease with a five-year survival rate of 11 percent.

Inflammatory breast cancer isn't hereditary. There is no gene they've identified that mothers pass on to daughters; no patterns that pick out certain women as targets. There is no known cause, and IBC often goes undetected in physical exams, preferring a dramatic entrance and quick bloom throughout the body.

An 11 percent survival rate. We cried. Mom began to keep an online journal about her treatments, sharing jokes and stories with the friends and family members who drove her to and from chemo, dropped off dinners on our doorstep and called to check in. She wrote thank-you notes for every single act of kindness. 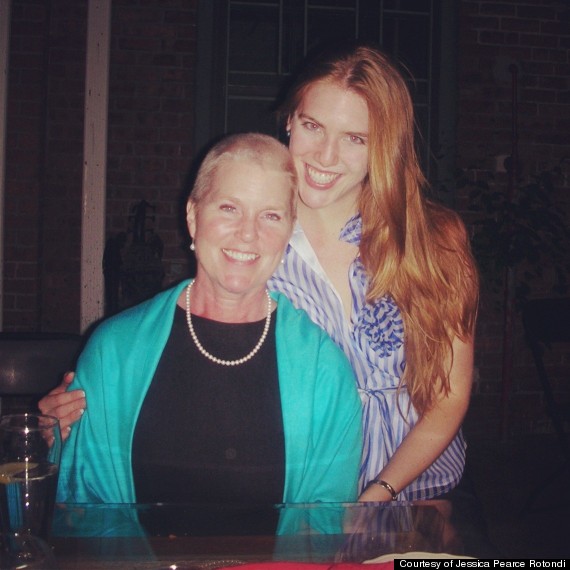 The all-too-familiar lighting in hospitals makes my heart race. I have panic attacks when I get my blood drawn and hold the hands of nurses kind enough to oblige the 26-year-old giving a routine sample with a squeeze. I recall my mother's bruised hands stuck with chemotherapy needles and am ashamed.

I flinch when a partner touches my breasts. I tell myself calm down, you're safe. I wonder if the chill will ever leave me.

I go to the weddings of friends and see in my mind's eye the last one we attended as a family: My father standing behind my mother in her wheelchair a month before she died, both of them watching the couple's first dance. I remember thinking how frail Mom looked, how young and sad and aged my father appeared behind her.

Breast cancer enters our bedrooms. It comes with us to fitting rooms. It's with us at weddings when our mothers or sisters are not.

The inheritance of cancer, whether it's in our genes or in our memories, is everywhere. One in eight women will be diagnosed with breast cancer in their lifetime. This October, when the world takes a month and dedicates it to a disease that is set to take away 39,510 people this year, HuffPost Women and HuffPost Healthy Living will be showcasing the stories of survivors, their loved ones and those currently battling the disease. If you'd like to share how breast cancer has impacted your life or the life of someone you love, please send your story, a photo you would like us to feature with it, and a headshot and bio of yourself to MyStory@huffingtonpost.com. If you have any questions, feel free to email us at that address.

This month, let's share our stories and support research that can give us all answers. 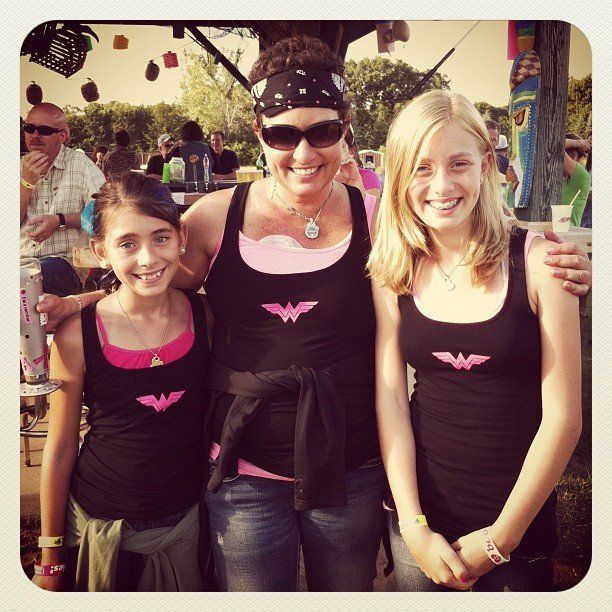 1 / 12
'I Promised Myself When I Made It Through, I'd Take My Girls to Disney World'
When I was 19, I was diagnosed with Hodgkin’s lymphoma. It was 1992. Imagine being only 19 and taking time off from college to go sit in a chemo room with cancer patients only to realize that you, too are a cancer patient. Part of my treatment for Hodgkin’s, beyond the absolutely terrible chemotherapy regime, was one month of radiation to my chest. Fast forward to 2004, when that same radiation “caused” my breast cancer. I was 32 with two children, a checked out husband and breast cancer. I chose a double mastectomy and had chemotherapy. I could not have any more radiation at that time because I had so much 12 years ago. The chemotherapy made my bones ache from the inside out. I slept during the day so I could be awake for my kids in the evening. I had to continue working full-time to support our family. I continued to be involved in my children’s school and activities, but I also had to fight this disease, which is a full-time job on its own. My daughters, 2 and 4 at the time, shaved my head for me. I promised myself that when I made it through that I would take my girls to Disney World one day. After chemotherapy and reconstruction I started on Tamoxifen, which gave me terrible hot flashes and night sweats. My husband left me. I was devastated. But I went on. I took the Tamoxifen for five years and then went off it and life continued. I took my girls to Disneyworld. And then… In 2011, I was again diagnosed with breast cancer. It was in the same breast. Although I had chemotherapy and a double mastectomy and had less than a 1% chance of recurrence, it came back. I was either damned or really special. I wasn’t sure if I should buy a lottery ticket or lock myself in the house. The weekend after I was diagnosed, I invited all of my favorite women over to my house for wine and snacks. I needed the strength of women around me. That may have been the last day during the past year that I knew what I needed. I had another mastectomy on the right side. This time it also involved my lymph nodes, so we had 12 of them removed as well. I underwent six months of chemo and a month of radiation and am now on Arimidex. Arimidex leaves me feeling irritable, achy and not like myself. But my body needs it, so I take it. I am awaiting my final reconstruction surgery after the New Year and am also electing to have my ovaries removed to get that estrogen out of there. My girls are turning 11 and 13 this fall. They have dealt with this nasty disease virtually all of their short lives. A few months ago, my friends had a benefit for my family to assist with our bills. I am not one to accept help, so this was difficult to accept. I chose instead to see this as a celebration of my fight and an outpouring of love and support. Looking out that day at all the people who came out for my family, I was overwhelmed in an amazing way. People I didn’t know came out to support my children and me. It reminded me that there are so many good people in this world and that my battle was not mine alone to bear. Telling a cancer experience or battle does not only take two or three paragraphs. It takes a page for each day. It is something you think about and deal with each and every day in one aspect or another. But today I am here and healthy and believe there is no cancer in my body. -Monica Theis
Monica Theis