Can breast enhancement surgery give you a better orgasm?

Maybe. According to a poll by RealSelf.com, women who had chosen to receive breast implants or breast lifts claimed a 34% increase in overall satisfaction with their sex lives, on average. They also claimed to have more sex post-procedure.

The survey, conducted on RealSelf.com, found that 61% of women reported they had sex more frequently after their breast plastic surgery, while only 7% claimed to have fewer sexual encounters. 70% of respondents said their overall sex life satisfaction improved after the procedure; 28% of patients go even further, claiming their satisfaction levels went up "four points or more" based on the one to ten scale.

It may be impossible to prove that the surgeries themselves were responsible for women's increased sexual pleasure, but we suspect the confidence boost patients receive has much to do with it.

Plastic surgeries have made a fresh round of headlines lately. While breast implants may lead to more pleasurable repercussions for adults, a number of teens are opting for another procedure with the goal of looking good for prom: chin implants are reportedly on the rise among high-schoolers.

The total number of cosmetic procedures performed in the United States by plastic surgeons has nearly doubled since 2000, with plastic surgeons performing almost 14 million procedures in 2011. It's not all good news on the breast implant front, however; 8,000 French women recently had their implants removed after ruptures in their brand of insert were found to cause health problems.

Check out the infographic below, and click over to RealSelf.com to read more finding from the study. 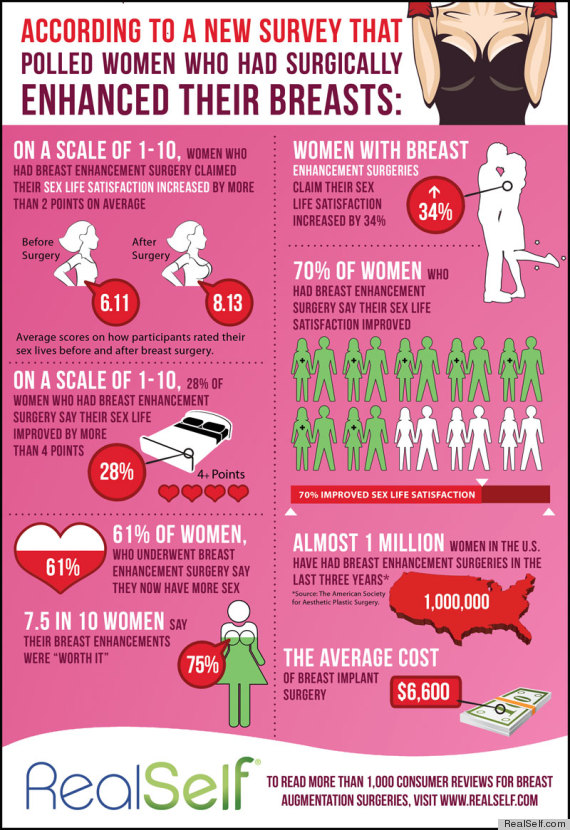