BOOBS! Now that we have your attention ….

This is a premise advertisers have been relying on for years. We’ve seen companies use breasts to sell everything from perfume to cars to magazines. “Sexual content is everywhere in advertising,” asserts AdWeek’s David Wallis in a recent feature titled “The Breast of Advertising.” So -- what is the state of so-called “boobvertising”? (Thanks for the term, Jezebel.) Is it actually as effective as common knowledge would have us believe?

The answer is yes -- and no. As proven most recently by TIME’s we-couldn’t-stop-talking-about-it breastfeeding cover, boobs still pique the interest of consumers. The shocking cover photo got TIME a lot of press -- and a 50 percent increase in sales over 26 weeks, reported AdWeek. Tom Ford’s 2007 print ads depicting perfume bottles between women’s breasts did incredibly well for the brand, and “breastaurants” (aka chains like Hooters whose main attraction is their scantily-clad female waitstaff) rake in between 2 and 2.5 billion dollars a year. A recent Snickers ad took it a step further and actually made the message all about the breasts, telling men that they won’t be able to remove their lady friends’ bras if they haven’t eaten a candy bar first.

However, Wallis also claims that too much boob can detract from brand loyalty. Consumers tend to get distracted by the breasts and forget what the ad is actually trying to sell. So while boobs are good for attracting eyeballs, they don’t always translate into sales. Plus -- unsurprisingly -- breast-centric advertising is much less effective for targeting female consumers than male. And let’s not forget that young, urban, single women are a prime consumer demographic. By some estimates, they're on track to outearn their male counterparts, and they aren't likely to spend that extra income on products marketed through “boobvertising.”

To illustrate the hilarity -- and ubiquitousness -- of breasts as a marketing tactic, here's a slideshow of 10 boob-centric advertisements.

To read more on "boobvertising," click over to AdWeek’s feature “The Breast of Advertising.” 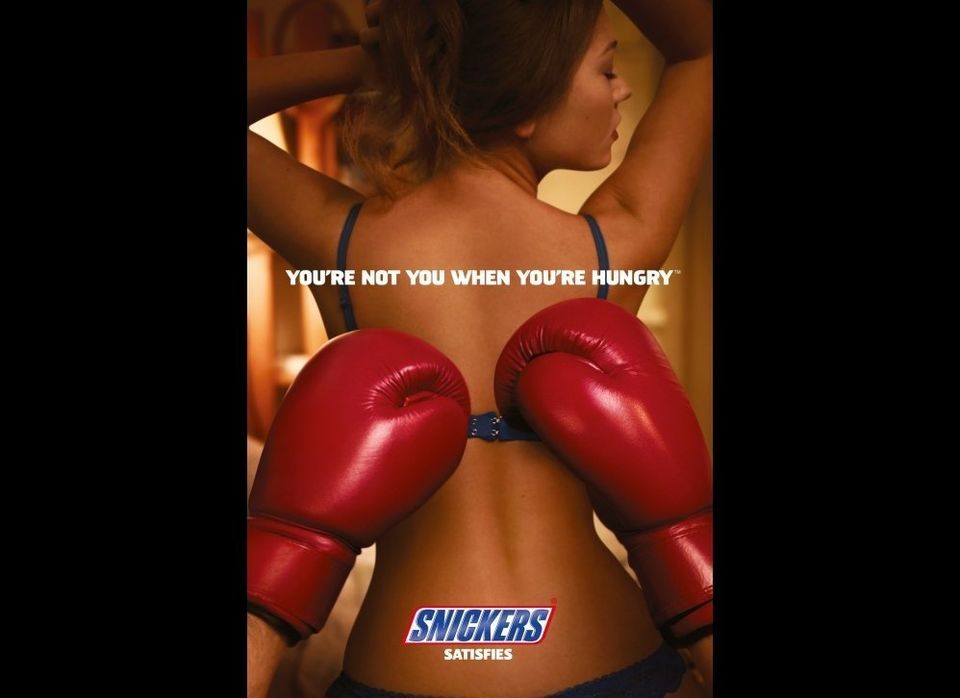