Hi Mark, On January 29th, I released Confessions of an Ex-Femen Member through the publisher "Éditions du Moment." I joyfully decided to use the cover of my new book as the profile picture on my Facebook page. I did this without taking into account the specious prudishness of your virtual kingdom, as well as your penchant for censoring things unnecessarily. 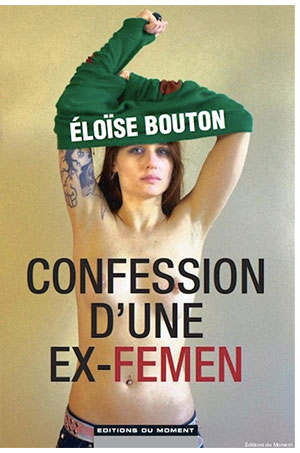 Three days later, I realized that my profile picture had disappeared and that I could no longer log into my account. I received a message from your kingdom stating that my account had been blocked for an undetermined period of time. The reason? The cover of my book had been judged as "inappropriate" due to nudity (even though you have to stare at it for 10 seconds to notice the two breasts which are covered with a large typeface).

Tell me, Mark. Doesn't it seem like you're doing things in reverse? You, who allow groups which glorify rape remain open on your website for months before shutting them down? You, who allow images of decapitations, torture and eviscerated animals slide, and seductive, crude and inept advertisements that use the naked female body for commercial benefit? You, who remain idle while openly pornographic profiles terrify us as they flood our inboxes with pictures of enlarged phalluses, urging us to become "friends" with them, in order to regale us with other obscene hogwash (perhaps an insult to our porcine friends)?

And yet, we already told you that you were out of line. Like when you censored the page of Laure Roynette's gallery, which featured the photographic series "Chewing Girls" from photographer Clémence Veilhan. Or when you disbanded the group "A Bracelet Against Cancer" after a photo was published featuring a naked pregnant woman. Or maybe the poster of Pauline Delpech in 2012, which sensibly depicted the importance of regular breast cancer screenings (from which over 520,000 women around the world die each year)? One user who had posted an image of the painting "The Origins of the World" by Gustave Courbet even presented you with a legal subpoena for the deletion of his account. To refresh your memory, we even dedicated a Tumblr page to you, featuring many of the images that were blocked on Facebook.

But one question has been bothering me, Mark. Do you know Marianne? She is our national symbol here in the French Republic. You know -- freedom, equality, all that stuff. In Delacroix's famous painting, her breasts are slipping out of her shirt. So, if in the future I post a picture of our Liberty guiding her people, will my Facebook account be cast off and buried into the dark obscurity of the Internet?

You are acting all cute with the "freedom of expression" mantra that you are force-feeding to your users to the point of agitation, with your sweet talk that is filled with good intentions, which you posted on your own Facebook page after the attacks on Charlie Hebdo. I quote:

"I am determined to build a service where people can speak freely without fear or violence."

"Freely," except for when it comes to women's bodies. Breasts are bad. Apart from mothers with their little babies performing the sacred ritual of breastfeeding, which you have finally ceded to and have authorized in your kingdom. If this provides you with sufficient justification to, on one hand, allow sexualized advertisements while, on the other, robbing us of our personal information, then aren't we having trouble distinguishing pornography and violence (directed towards women, amongst others) from art and political messages?

At the same time, Mark, you are wavering. Think for a second how, last December, I was sentenced to one month in prison with a suspended sentence, a 2,000-euro fine for interest and damages, and another 1,500-euro "justice tax" for sexual exhibitionism following the act of radical activism of showing my naked torso to defend a woman's right to abortion. In real life, I was able to appeal this decision, but with you, we cannot click on an "appeal" tab. And since I am a feminist, I cannot stop myself from noticing male chests circulating all over your site without consequence and receive your narrow-minded precepts like a discriminatory slap in the face. Is Facebook chauvinist?

Mark, please remove this horrible doubt from my mind. If you unblock me, I'll send you a copy of my book. You are already well versed on the subject.

This piece was originally published on HuffPost France and was translated into English.