Mitch Dobrowner has a vivid imagination. When he listens to music, he can see colors. And before he goes out to photograph, his mind’s eye already sees an image of what he wants.

This time, it was something like a spaceship—the type of storm cloud that takes on a distinctive saucerlike shape.

His expectations were met—and then some—the first time he found himself facing a supercell storm on America’s northern plains. He and Roger Hill, a veteran storm chaser who’s been his guide ever since, had been following this particular storm for nine hours as it wound its way from Sturgess, South Dakota, through the Badlands, and down into Valentine, Nebraska, gathering force as it went.

“I couldn’t believe what I was looking at,” he says. “It was so surreal to me.”

“After that I’d just go out, and these [phenomena] kept on happening. I don’t even know if the pictures do justice to what I’m looking at.”

For anyone who’s seen Dobrowner’s breathtakingly beautiful images, there’s no doubt that they do. (Case in point: A print of one of his tornado pictures was used as an inspiration for the cyclone in 2013’s Oz the Great and Powerful.)

Dobrowner comes from the school of classic landscape photography—think Ansel Adams, large-format film cameras, carefully composed black-and-white exposures. When photographing landscapes, he typically spends a couple of days finding his compositions and waiting for the right light. He can take his time because, as he points out, the rocks aren’t going anywhere. He compares the process of discovering his surroundings to stepping into a darkroom and waiting for his eyes to adjust.

But with storms, the adjustment has to happen much more quickly. “I don’t know what’s going to happen when I step out of the van,” he says. For him, it’s more like photographing a sporting event, where you have to act fast or the moment is gone.

Also different is the equipment. Shooting digital rather than large-format allows him to both move quickly and preview the images. And he has to maintain his concentration in the face of wind and rain, which also means constantly wiping his lens between shots (and no, he doesn’t Photoshop out the raindrops.)

“The only thing I ever listen for when I’m out is Roger saying, ‘We’ve got to get out of here right now,’” he says. But sometimes he also just wants to stop and take it all in.

“Storms are like a creation to me,” he says. “They don’t exist unless all the elements are just right … the right humidity, the right winds. If everything’s right they form structure and mature. They feel like living things. No two storms are alike.”

For a few weeks every summer, Dobrowner travels from his home in Los Angeles to the northern plains, meeting up with Hill and going where the weather takes them.

Aside from the adventure of never knowing what he’s going to see next, the true pleasure for Dobrowner comes with being able to share what he sees with others. “I see us as so little in comparison to the universe—on this spinning rock through space,” he says. “We’re not here very long, so I just try to photograph how I see the world, and if people relate to that I’m honored.”

A few years ago, he took his teenage son out, wanting him to experience the storms for himself, to give him an experience he would never forget. After his son ended up posing in front of twin tornados in Nebraska, he said to his father, “I thought you were kidding—can we get out of here right now?”

But he’s still talking about it three years later. “To me,” Dobrowner says, “that’s what it’s all about.”

You can see more of Mitch Dobrowner’s work on his website.

Alexa Keefe is a senior photo editor for National Geographic.

Pictures Capture the Bond Between Politicians and Their Dogs

Are We Losing The Grand Canyon?

One Of The World’s Most Unusual Plants Is Disappearing 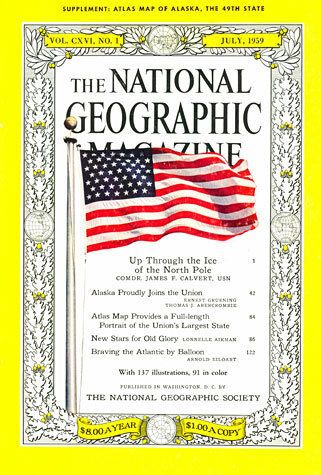 1 / 51
July 1959—First Photograph Appears on the Cover
Seventy years after its founding in 1888, the National Geographic Society introduces the first photograph on the cover of its increasingly popular journal. Following a tradition of American flag covers in July that began during World War II, the July 1959 issue features the new, 49-star banner. Alaska, admitted to the Union in January 1959, is profiled in several articles, and a map of the newest state is included as a supplement with the issue.
Photograph by B. Anthony Stewart