The Breezehouse, A West Coast Icon, Makes its East Coast Debut in the Hudson Valley today and tomorrow, January 26th and 27th. The East Coast will have an opportunity to experience firsthand what the West Coast has been able to see for years when Blu Homes hosts the grand opening of the
Hudson Valley Breezehouse. The Breezehouse is one of the most iconic designs tocome out of the popular modern prefab design trend. This green precision-built house design from Blu Homes has
just been built in New York's Hudson Valley, marking the first time it's
made an appearance east of the Rocky Mountains. But while new ideas often push their way west from the East Coast, this is one distinct example of that trend working in reverse.

A Short History of the Breezehouse

The original Breezehouse was designed by California-based architect Michelle Kaufmann, who created the home to literally open to the breeze: facing walls open to the outdoors via large sliding doors, letting the breeze literally drift through the home. Cleristory windows above the doors create a convection effect that keeps the air circulating. While the design creates a beautiful central space -- thanks in part to its high ceilings and extensive fenestration -- it is equally as practical. Although relatively small in size, the Breezehouse's features conspire to create the feel of a much larger home.

The Breezehouse debuted in 2005 at Sunset magazine's Celebration Weekend. Since then, Blu Homes and its team of architects have added some savvy updates to the home, including a roomier design, energy-efficient and sustainable technologies, and advanced building construction techniques, which enable it to be delivered anywhere in the U.S., Canada and Hawai'i.
All Breezehouses are LEED silver certifiable upon delivery and can achieve additional green accreditation as well. 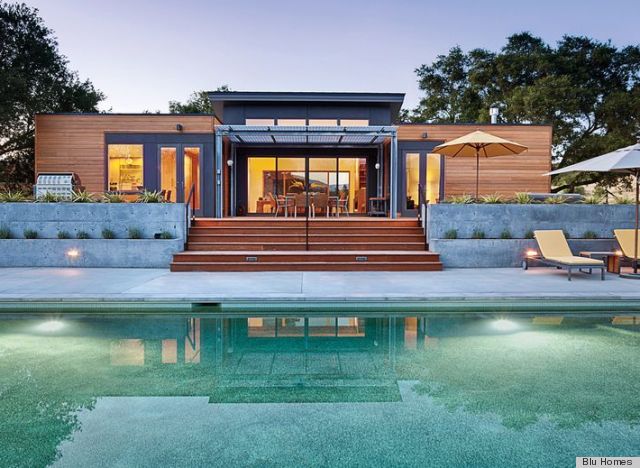 One of my favorite aspects of the California lifestyle is indoor/outdoor living. Sunset magazine, a true West Coast original, has been championing the concept for the past 115 years. While it may seem climatologically challenging to bring such a concept to the East Coast, I'm happy to announce that the Breezehouse, has translated that concept beautifully--and structurally--for the East Coast in the Hudson Valley home. And while this home may have been born in California, its carefully engineered butterfly roof can withstand significant snow and wind loads, making the Breezehouse a great candidate for rugged New York winters.

The house itself is highly energy efficient and built with eco-friendly materials. We absolutely believe in the need for eco-friendly materials in terms of sustainability, but these green choices also make the home more livable and healthy for its inhabitants. A win-win. Like all Blu homes, the Hudson Valley Breezehouse was built in our state-of-the-art California factory in around eight weeks, transported by truck across country, and then unfolded on site to reveal its clean, modern design.

Breezehouse, which is currently for sale, is actually the model for the first Blu Homes development in New York State. We partnered with developer Neil Costa for this development, which is located in Columbia County, about two and a half hours north of New York City and two hours west of Boston. The entire development is located on 200 acres, over which 11 additional sustainably developed home sites have been planned. Each site ranges from just under 7 to around 24 acres, all of which are currently available for sale. Costa worked with conservancy groups to sustainably develop the project, which is tucked into picturesque forests, streams, ponds and vistas. We're quite certain that future homeowners will take full advantage of the indoor/outdoor design of the Breezehouse, thanks in large part to the beauty of the home's natural setting in Columbia County.

Today and tomorrow, modern design lovers, eco enthusiasts, and potential homeowners can view the Breezehouse in person during a weekend-long grand opening event. With this project, we're excited to introduce a green, modern twist on development living. Will you be visiting Blu Homes' Breezehouse for the weekend? You can here to register here for the event. Click through the images below of the home, and we'll see you in the Hudson Valley!