Pablo Picasso once asked: "What is a face, really? Its own photo? ... Doesn't everyone look at himself in his own particular way?" While today photographs reign in terms of capturing a person's likeness, the magic of the painted portrait has its own way of evoking the spirit of its subject.

Brooklyn-based artist Brenda Zlamany is exploring the effects of portraiture around the world, starting with Taiwan, where she painted 888 watercolors. Dubbing herself the "Itinerant Portraitist," her performance paintings will not just yield artworks but personal relationships through the intimate ritual of painting someone's likeness.

Last July through September, Zlamany visited 33 locations in Taiwan, from aboriginal villages to bustling cities. Her subjects ranged from young children to a 104-year old woman; they did not speak English and were often uncomfortable posing. Yet even without words, the process of the portrait formed a bond between Zlamany and her subjects even in a matter of minutes. To facilitate an unspoken dialogue between artist and subject Zlamany used a Camera Lucida, a technique dating back to the Renaissance that superimposes the image of the subject onto the space where the artist is working. According to an email Zlamany wrote to The Huffington Post, this technology "promotes a two-way exchange between artist and subject." 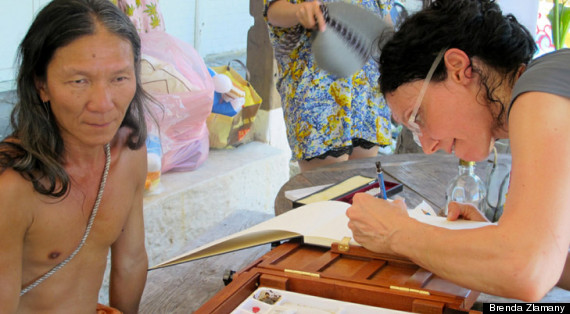 While few painters can compete with the realistic detail of a photograph, many subjects cherished a different kind of sincerity from the paintings that a camera cannot achieve. Cerita Chen, who sat for Zlamany in Taoyuan, told The Taipei Times: "I felt my portrait was different from what I see in a photo or the mirror. I felt she had captured my spirit and what I was feeling.”

After returning to New York, Zlamany turned her favorite watercolors into oil paintings. She plans to repeat the project in Laos and Cambodia, and hopefully Israel and Palestine as well. By combining painting, performance art and conceptual art, Zlamany's images show that much of an artwork's impact occurs before the piece is even completed.

"888: Portraits in Taiwan" will show until June 30 at the Taipei Economic and Cultural Office in New York.