If you're like us and absolutely adore both Brené Brown and Elizabeth Gilbert, you've probably seen their selfies with each other, their shout-outs to each other on social media and in the press, and maybe you've even been following them side-by-side the last few months as they journey together through their respective book tours. They are clearly more than just 'author friends' and share an amazing, authentic, and soulful connection. If you've read their new books, Rising Strong and Big Magic, you've probably noticed their work goes hand in hand. 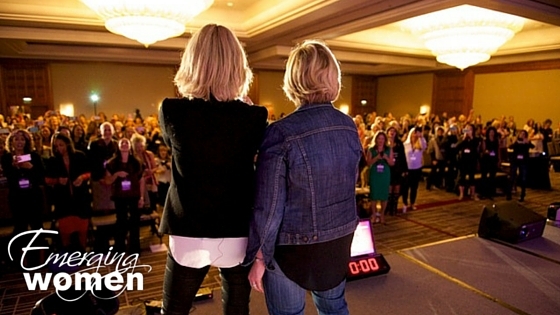 Did you know Emerging Women helped bring them together? The two met in person for the first time at Emerging Women Live 2013, when we hosted our inaugural event in Boulder, CO. And one of the most magical things about Emerging Women Live 2015 was reuniting Elizabeth Gilbert and Brené Brown on stage for a hilariously inspiring conversation and a beautiful glimpse into their amazing friendship. We have this conversation and all of our main stage keynotes on-demand until November 11, 2015. Login to the free live stream and get ready to be inspired beyond words!

Attendees were captivated as Brené and Liz discussed the inspiration, transformation, and emotional impact their work has had on each other. Brené got a lot out of Liz's Big Magic, saying writing doesn't always come easy for her, and Liz shared how she has been able to live a fully expressed life due to Brené's work on vulnerability and shame.

Plus, they have each other's back in the uber-competitive literary arena. Liz shared how the second person who reached out after Big Magic hit #1 on the New York Times best-seller list was Brené. Journalists ask them, "You're going to be on the same list -- do you worry about that?" Their response is "What?! That's a scarcity mindset." They want huge, wild success for each other, and also realize there is a trembling, emotive 'edge' of journeying towards that.

"It's okay to celebrate when wonderful things happen in your life," says Liz, "and you have to. Pop the champagne and call your friend. Don't be afraid of joy. That's part of not being a martyr. It's okay if you don't get there, but my god how nice when you do." She goes on to elucidate the difference between the Trickster and the Martyr. While a Martyr worries about who's #1 on the New York Times, the trickster says "Have fun, Martyr. While you're dying, I'm going to be over here dancing with your date, flipping things, throwing banana peels and pulling the rug out from under reality." 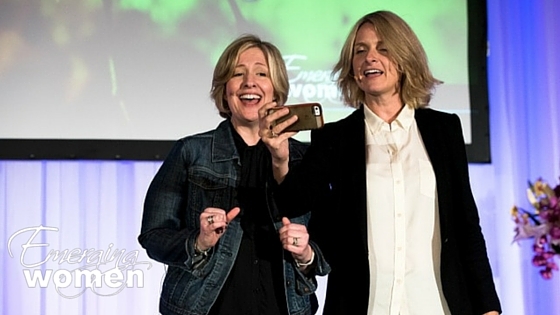 Brené counters this genius perspective with a perfect, "Hi, my name's Brené and I'm a Martyr." But she goes on to show how Liz has taught her that you can flip martyrdom into tough trickster-dom. Brené flipped it by trusting her team in an edgy experiment where she played to her strengths by teaching Rising Strong to them first, letting the writing of the book come out of that process.

When Liz asked Brené about her edge, she opened up about Courageworks, her new online learning community that offers eCourses, workshops, and interviews developed to help people embrace bravery, lean into vulnerability, and rumble with the challenges that come with living a daring life.

Liz poignantly shared that her edge is trying to honestly express what she can and cannot do. Book-signing lines aren't happening during her Big Magic tour, she explained, because she knows that's the line she has to draw to stay healthy and sustain the energy it takes to share her book with thousands of people on a 5-country and unlimited city tour around the world. "I am taking a step back for myself," she says. Major stress and anxiety lead up to making the decision to forgo book signings, but after significant deliberation and soul searching, she came to the decision that she could simply not risk ending up in the hospital. 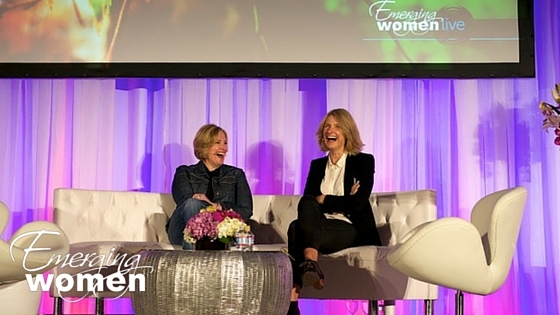 In true soul-sister fashion, Brené echoed and applauded her difficult decision, challenging the audience, "Raise your hand if you are exhausted from saying yes when you want to say no." The audience applauded in turn. The amazing duo ended their conversation by singing "I Will Survive" with the entire audience. If you haven't seen it, it's a must. Tune in now to fist-pump your way to a more fully expressed and creative life. The whole conversation plus karaoke finish is available for replay on-demand until November 11, 2015 - click here to watch!