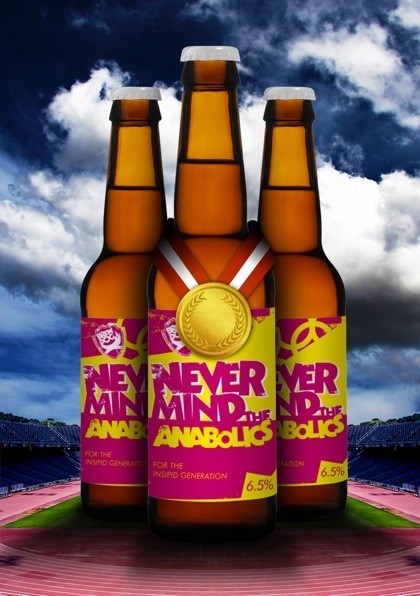 Scottish brewery BrewDog has a special Olympics-inspired beer on the market, but athletes should think twice about drinking it.

But that may not be the entire story, according to the website PR Examples:

It turns out, having spoken to somebody involved with the campaign, that only the first batch of beer contains steroids – the ones being sold to the public will not contain steroids, though they still contain the other substances athletes are banned from consuming.

My concerns were simply because it’s illegal to sell steroids in the UK, though legal to buy them for personal use.

But even if the beer didn't contain steroids, would it be legal? BrewDog's cofounder, James Watt, says that it is:

It seems a beer laced with performance enhancing ingredients isn’t actually illegal, but it is definitely frowned upon. However, we don’t think Never Mind the Anabolics is as absurd and obnoxious as the tenuous sponsorship deals from fast food chains and global mega breweries that seem to define the people’s games.

It is about time the greatest sporting event on the planet was not sponsored by fast food companies, sugary fizzy drinks producers or monolithic multi-national brewers. A burger, can of fizzy pop and an industrial lager are not the most ideal preparation for the steeple chase or the dressage (for human or horse).

BrewDog released a video promo for the beer, which leaves us wondering about the beer's components. At one point, a brewery representative says, "It's fake." What to believe?

Never Mind the Anabolics from BrewDog on Vimeo.

The Drinks Business reports that a percentage of the proceeds from sales of the anabolic beer are going to a questionably good cause: a new surfboard for a surfing dog called Abbie. It's all part of the company's message of absurdity, the publication says.

Another question lingers surrounding the bottle's use of the Olympics' trademarked rings. The Olympics have cracked down hard on use of the iconic logo, drawing criticism even from London's mayor Boris Johnson.

As we've reported before, BrewDog is no stranger to controversy. In May, the self-described "post Punk apocalyptic mother fu*ker of a craft brewery" was set to receive a prestigious award for Bar Operator of the Year from The British Institute of Innkeeping, but at the last minute the honor went to global corporation Diageo when Diageo employees pitched a fit.

BrewDog has conjured up other cheeky concept beers in the past. Those include Nanny State (a very weak but heavily hopped bitter, brewed in response to criticism of their other beers' high strength) and Sink The Bismarck! (a 41 percent ABV beer that at the time was the strongest beer ever brewed). Other BrewDog beers also have colorful names, including Dead Pony Club, 5 A.M. Saint, Punk IPA, Dogma and Hardcore IPA.