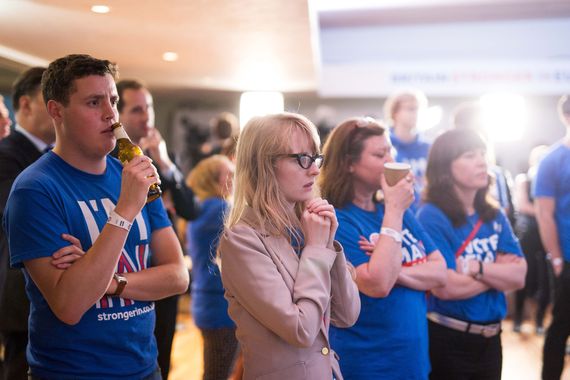 Stunned seems to be the most used, operative word around the world, regarding the results of the UK vote to leave the EU. Check any newsfeed you subscribe to; any source you read, watch or listen to and it seems everyone is stunned.

In fact, even the gamblers got it all wrong, according to The New York Times:

Britain's decision to leave the European Union on Thursday was a big surprise. As late as 6 p.m. Eastern in the United States, less than five hours before the results became clear, betting markets gave "Remain" an 88 percent chance to win the election, but it wound up losing by four percentage points.

And by the way, as did the financial analysts who send the prices of publicly traded markets up and down based on their deep knowledge and insightful understanding. The article continues...

The forecasting error wasn't confined to bettors, either. Financial markets didn't anticipate "Brexit," resulting in a decisive correction in equity and currency markets that usually would have already been priced into trading.

To be clear, I am not an economist and although, like all, I am ready to discuss politics over a beer or bottle of wine, why then am I writing about Brexit...beyond the obvious populist reasons?

Frankly, I compose this from Cannes, France, where my industry has just concluded its annual pilgrimage to the Cannes Lions International Festival of Creativity and paid homage to the best in class from all over the world.

Over the course of the week I heard many political and news pundits predict the outcome of Brexit - wrongly as it turns out - but I also listened to many company leaders and digital experts pontificate about the ability to use data to do just about everything from getting you to buy what you never wanted to buy all the way to using AI (artificial intelligence) to predict that you really wanted those purple pants with the embroidered red whales months before you came to that conclusion yourself...

Way back in November of 2012 I wrote a piece on Post-Election Learning...how was it that in the US election contest between still President Obama and then candidate Mitt Romney, everyone got it wrong? I wrote then:

Data and demographics made a lot of headlines lately as pundits handicapped their way to Election Day.

Worse, even the analysis of the Digibabblists was proven wrong, as in their own self-serving way they tried to prove that Obama's victory was all due to digital data linked to digital social expertise and primacy...turns out the Obama folks used good old-fashioned data to knock on doors and drive folks to the polls....

But I digress...returning to Brexit and The Economist in an article called, "Polls Versus Prediction Markets:"

The list of losers from Britain's vote to leave the European Union is long indeed, but very far down on it are evangelisers for the accuracy of prediction markets. It is an article of faith among economists that betting markets on politics provide by far the most reliable forecast of future events, easily outclassing both polls and panels of experts. Yet for the two most important political developments of 2016, and arguably of the past few years - Brexit and Donald Trump winning the Republican nomination for America's presidency - simple polling averages have put punters to shame.

How did the wisdom of crowds fail so spectacularly?

...the explanation probably lies in the familiar litany of cognitive biases that lead people astray despite their best efforts to be rational. Historically prediction markets, like horse races, have tended to demonstrate favourite-longshot bias - overestimating the chances of improbable events and underestimating those of likely ones.

Frankly, I think the explanation can be stated much more simply:

People never lie so much as before an election, during a war, or after a hunt. - Otto von Bismarck

And there you have it...

We are in danger of losing the unique human ability of deriving insight from situations vs the basic instinct that drives other life forms.

The more we rely on software loops and algorithms to make our decisions and draw our conclusions, the more in danger we are of creating an ever narrower world of options and, worse, an ever scarier world of surprising and startling outcomes.

Truth is that in the UK the Brexit polls were so close and the differences seemed to be statistically invalid, leading one to wonder why so many gamblers (a sure bet) seemed so sure that Britain would remain - or as The New York Times put it:

...a dose of wishful thinking from a pool of relatively affluent globalist gamblers who simply didn't believe that Brexit could really happen.

And therein lies the answer - "affluent globalist gamblers" the likes of analysts, Digibabblists and others who would have us believe that our opinions, sentiments, beliefs and feelings are no longer relevant in a world of Big Data.

Folks...Brexit was simple...binary...yes or no...the upcoming election in the United States will be the same...how wrong will we get it?

At Cannes I was privileged to host a dinner where IN-Q, a National Poetry Slam Champion and multi-platinum winning songwriter, shared some of his deep thinking with us. He talked about the difference between ideas and ideals and said that the danger is getting locked into the rigors of an ideal that could forego our ability to create new ideas...

Or as articulated by Marshall McLuhan:

A point of view can be a dangerous luxury when substituted for insight and understanding.

Or as specifically related to Brexit, Hillary and Donald...an incredibly relevant thought from a US President of the last century...Listen:

The method of political science is the interpretation of life; its instrument is insight... Woodrow Wilson

Finally and perhaps the most stunning outcome of Brexit from Google Trends:

"What is the EU?" is the second top UK question on the EU since the #EURefResults were officially announced

A little insight and less "affluent gambler" POV might have actually changed the outcome...

And there you have it and why I write this from Cannes and the Festival of Creativity.

Time to stop wondering how to get me to buy those whale pants...and time to ask me why I won't...

And if you don't think I have a point, I suggest you follow the growing stories of "buyer's remorse"/second referendum coming out of the UK...many on the topic of "we just didn't understand" or "we were fooled"...